It’s possible, if not probable, that young New York Times employees realize this. 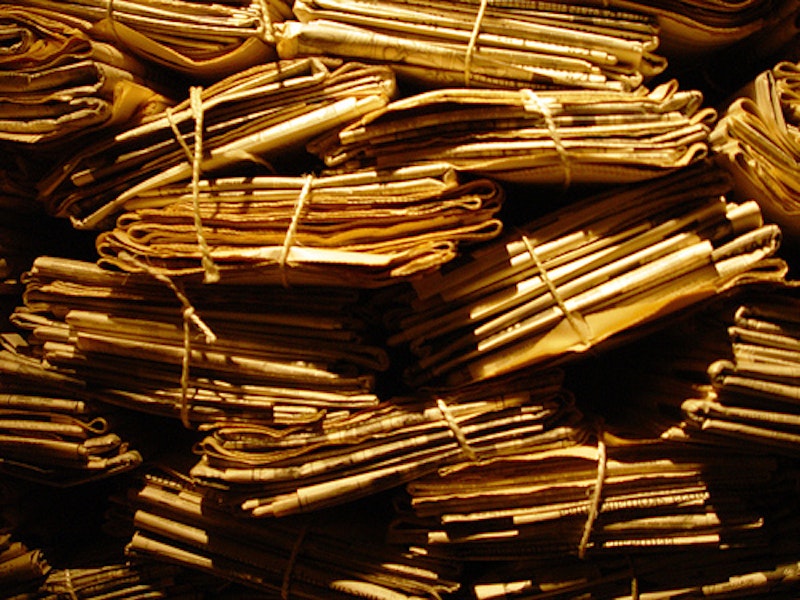 Just as a decreasing number of Americans still have the jingle “Winston tastes good like a cigarette should” etched in a corner of their minds, some people still claim—in all seriousness—that The New York Times is the “paper of record.” It’s fairly beyond dispute that the percentage of media consumers under the age of 30 don’t cling to that opinion about the Times, let alone even recognize the famous motto pushed by the paper, and so, inevitably, one day it’ll die out. Probably not in my lifetime, for even as the Times, like other print dailies, slides into niche-status—not unlike vinyl recordings—steadfast loyalists will warble, “If it’s in the Times, it must be true.”

Leave aside the reality that the number of men and women working at the Times will continue to dwindle as the decade proceeds, and consider Dowd’s completely anachronistic train of thought. For the truth is that almost no one relies on the print version of the Times to discover breaking news, since any such story was available online half a day earlier—either on the Times’ own website or other venues—and, in fact, the national edition (which I still get delivered; my wife is a traditionalist and enjoys fiddling with the crossword puzzle each morning) is almost worthless for any time-related articles.

So, really, this whole “paper of record” business is now just a red herring, or, more kindly, a quaint relic of the past. As Dowd presumably understands, the era in which readers went to exclusively to one paper— the Times, Washington Post, Wall Street Journal or Los Angeles Times—for their first scan of the day’s news is over. Some, whether they’ll admit or not, go to Twitter, Real Clear Politics, Gawker, Facebook or even The Huffington Post before visiting a daily’s homepage. And apparently, a not inconsiderable number, God help them, click on Ezra Klein’s “Wonkblog” to confirm their political points of view. It’s understandable that Dowd pines for the days when she did break stories—I remember picking up the Times in an Atlanta hotel in the fall of ’87 when she doomed Joe Biden’s presidential hopes by igniting his plagiarism scandal on the front page and saying to a buddy, “Holy shit!”

If I were inclined to live in a nostalgic bubble, this reality might be distressing—not about the Times, thanks, but for, say, the obsolescence of up-to-date sports scores—but you can’t blame elder Times luminaries for believing the paper’s Olympian status still exists. But it doesn’t, it’s gone the way of civilized TV news broadcasts and a profitable music industry.

I also think this leads pundits to increasingly toss off columns, tapping lackluster and dated sentences on their laptop while eating a bowl or organic cereal with soy milk. That was my impression reading the Times’ Frank Bruni (who, to be fair, still has more juice than Dowd, Paul Krugman, David Brooks, Gail Collins or diplomat-in-his-own mind Thomas Friedman) on Sunday, a piece in which he’s belatedly discovered that Americans have rejected the homespun notion of “moderation.”

Bruni was the last person in America to notice the “binge” appeal of Netflix’s House of Cards 13-episodes-all-at-once gambit (which I applaud, since just like watching DVDs or On Demand, you can avoid commercials), and that led him to other examples of immoderation. He writes: “The word ‘extreme’ stuck with me and struck a chord. We compete extremely (look at Lance [first-name basis, Frank?]). Eat extremely. Watch extreme amounts of whatever we’ve decided to love, which we love in extremis. Even our weather is extreme: superstorms, Frankenstorms, snowmageddons… I blame the Internet. Well, that and social media and cable television with its infinity of channels.”

Maybe Bruni has selective amnesia or is just ticked off at all digital media, for if he got out of the moment, he’d remember that Jane Fonda’s punishing “Feel the Burn” videos were pre-Internet, as were “extreme” Big Gulps, triple beef Whoppers, cable TV (Bruce Springsteen’s 1992 song “57 Channels (And Nothin’ On)” and compulsive faxing. Oh, and I’d say that waiting on line for 36 hours to get tickets for a Rolling Stones show was also “extreme.”

Bruni’s laziness, as well as Dowd’s second childhood style of writing are just two example of the Times’ waning influence. It’s said annoying circumstance get “worse before they get better,” but in the Times’ case there simply is no “better.”