Congress is blasé about the upcoming sequester. 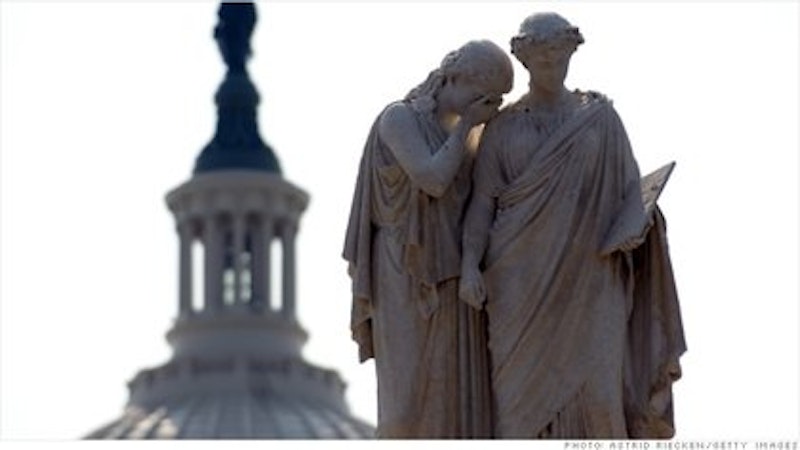 Sequestration is a big word for small minds. Essentially it means that Congress, America’s confederation of dunces, won’t do its job. Sequestration is an artificial barrier that Congress created when it was unable to make up its mind between taxes and spending cuts while they held America hostage over the debt limit. The mere thought of sequestration—$1.2 trillion in cuts over 10 years with $85 billion beginning on March 1—was supposed to be so awful that nobody would let it happen. Say what?

Congress is so blasé about the entire stalemate that it awarded itself a nine-day break to celebrate President’s Day. It returned Monday (Feb. 25), leaving four working days to resolve the protocol standoff with the White House before the doomsday clock begins ticking on Friday. Most polls show that if the massive cuts occur, Americans will blame intransigent Republicans. That in itself shows how out of touch the GOP is with the rest of the nation.

Sequestration is economics for dummies. The cynical say let it happen because government is bloated. And Republicans are pursuing a hapless dream of reducing government to its lowest common denominator. Having backed down on the debt ceiling and the fiscal cliff, Congressional Republicans are now trying to prove to their right-wing base that they have the cojones to stand up to President Obama.

Sek-wes-tra-shen (noun): According to Miriam Webster, the word can mean two things—either locking up a jury or impounding funds (or property). In the case of the Congress, the word translates into the usual simple equation: who’s going to get screwed, the rich or the poor. Under the sequestration plan, the cuts would fall immediately on the Pentagon and the defense industry. And now the Republican offer of compromise is to allow the defense budget to go untouched and make up the difference by resorting to the GOP orthodoxy of gutting social welfare programs, which is really what they wanted all along. It’s their way of attempting to dismantle the numerically growing Democratic constituency.

The White House counter-proposal would offset the cuts by cutting back on government subsidies, closing loopholes that benefit the wealthy and raising new tax revenue from certain industries as well as the wealthy. Republicans, as usual, reject any new taxes or cuts in subsidies that benefit business. (The oil depletion allowance to the industry is $4 billion a year. The industry has testified that it doesn’t need the money but Republican legislators refuse to cut the generous gift at a time when oil industry profits are soaring.)

America, it appears, is in a state of permanent class warfare. Republicans want to protect Beltway Bandits, those defense contractors who help make up the military-industrial-campaign contribution complex, as well as the top one percent of earners who constitute the party’s major financial base of support. Democrats, by contrast, are trying to shield safety net programs such as Social Security, Medicare, Medicaid, head start, meals on wheels and other programs that serve the needy, young, elderly, mentally ill and low-income earners.

Republicans are hell-bent on repeating their history of failure. Their approach, embodied in Rep. Paul Ryan’s (R-WI) budget and embraced by GOP Presidential candidate Mitt Romney, was emphatically rejected last November when Obama was reelected by more than five million popular votes and 335 electoral votes. In the battle over sequestration, the President has the support of the public and the polls by wide margins while the same surveys show the standing of Congress and Republicans at all-time lows.

And now the blame game is on. Republicans are cornered and have no course left but to attack and try to shift blame. They are attempting to portray Obama as the evil mastermind who conceived the nefarious plot back during the 2011 debt ceiling bargain. But it was House Speaker John Boehner (R-OH) who emerged from the meeting where the deal was struck and chuckled: “I got 98 percent of what I wanted.” The truth is, there’s enough blame to go around because Obama signed off on the deal as a way of buying time.

If the cuts occur as scheduled, the federal colossus in and around the District would be the hardest hit. Maryland would be among the five hardest hit states that also include Virginia, Florida, Texas and California. There are about 250,000 federal workers in Maryland as well as a large number of federal installations. Among them are Fort Meade, Patuxent Naval Air Station, Edgewood Arsenal, Aberdeen Proving Ground and Fort Ritchie among others. The Johns Hopkins University complex, including its Applied Physics Lab, for example, is the second largest recipient of federal research grants in the nation, totaling well above $600 million a year.

The Pentagon has warned its 800,000 worldwide civilian employees that they will be forced to take unpaid leave, according to reports. About 107,000 of those employees live in Maryland, Virginia or the District. And various estimates have the sequester, if carried out, costing the nation about 700,000 jobs.

The cuts would come at a time when the fragile economy is beginning to show signs of a modest, although slow and weak, recovery from its near collapse of five years ago. The stock market, which is a barometer of confidence in the economy, has reached an all-time high, and its apparent indifference to Washington is an indication that Wall Street believes the cuts will not occur and a temporary deal will be worked out.

And if the experience of Europe has taught anything it is that austerity in a time of economic distress is a formula for disaster. Those European nations that have imposed cutbacks—the United Kingdom, Greece, Italy, Portugal, Spain, to name a few—are in worse shape as a result of austerity measures, with high unemployment and low productivity choking their economies.

While Congress was on vacation, Obama busied himself with targeted news interviews and public appearances. At one White House appearance, Obama was surrounded by a group of first responders. He emphasized that if the sequester cuts take place the nation’s cops, firemen and paramedics would be hit by layoffs. (Talk about product placement: The camera was deliberately angled so that a pretty young uniformed white woman was seen over the president’s right shoulder during the entire speech.) At another appearance, he stressed long lines of travelers at airports because air traffic controllers would be furloughed. At yet another, the Administration claimed that as many as 30,000 teachers could lose their jobs.

But the pawns stuck in the middle of the bargaining are those who rely on government for a helping hand and who can least withstand the punishing cutbacks. The truth is that Congress can end or reverse the sequester anytime it chooses. It’s only a short time to see whether the GOP bows to public pressure or if both sides delay the deadline or, as they say in Washington, “kick the can down the road” and relive the sequester in another few months. It’s time for the ministers of influence in the Republican party to finally admit they lost the election.

Ooops! In last week’s column on heavyweight politicians, the name of Dr. Tom Pozefsky was misspelled. The correct spelling appears here. Regrets for the error.