A Washingtonian Rags on Baltimore 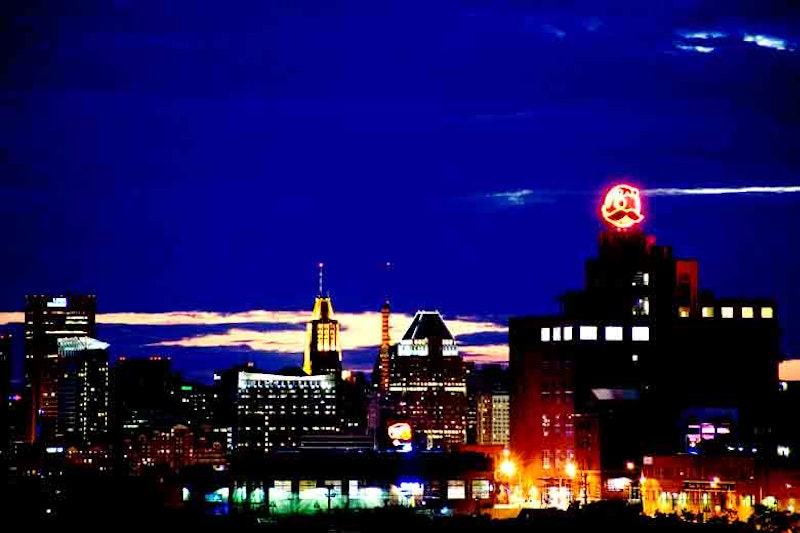 It’s a bit odd in 2013 when The Washington Post’s “Travel” editors assign a reporter to write yet another ham-fisted article about the attractions of ugly-duckling nearby city Baltimore. Marc Fisher, full of the D.C. condescension that Baltimoreans are accustomed to, but still seethe over, says, “[T]he long, slow exodus from Baltimore continues. But some folks who study cities say that a place like Baltimore can improve its reality and its reputation in part by getting smaller.” Actually, Baltimore suffered its worst urban flight in the 1960s, especially after the devastating King riots in ‘68, but in subsequent decades has, like many cities across the country, experienced back-to-the-city gentrification, and the “exodus” has slowed to a trickle. The same can’t be said for The Post, now in economic free fall, and if that daily were a city it’d probably be condemned. And like other newspapers (including Baltimore’s moribund, mostly useless Sun), the Post won’t ever rebound. Unless, by some miracle, it improves “its reality and reputation by getting smaller.” (In fact, I wouldn’t have seen the story if not alerted by The New Republic’s Alec MacGillis.)

Fisher’s paramount discovery is that parking is either free or cheap in Baltimore, and unsurprisingly, that appeals to him. I guess he didn’t get jobbed at lots like the Inner Harbor’s Gallery, or Johns Hopkins’ Homewood campus, but then he was more interested in detailing “the self-conscious celebration of the intersection between grit and hip going on here.” I guess there’s “grit” in Baltimore, as there is in the three quadrants of D.C. that aren’t identified as “NW,” but it doesn’t compare to Baltimore’s mid-20th century status, when, as a more populated city, it was home to factories, shot ‘n’ beer bars on every street, the robust red-light Block District and Eastern European immigrants setting a cultural tone. Not that the white-gloved ladies and blue-blood lawyers (or old-money coupon clippers) living in the city’s fancier neighborhoods of Roland Park and Guilford ever deigned to participate in that culture, save occasional visits to long-forgotten restaurants like Haussner’s, Gordon’s or the Chesapeake, but no matter.

Not a native, I’ve lived in Baltimore for nearly half my life, in two periods, separated by a 16-year stay in Manhattan. When I arrived as a college freshman in 1973 (tuition at Johns Hopkins was $2700), the city was a close-by-eight-p.m. dump. On that first night, my roommate and I walked from 33rd and N. Charles Sts. down to Fells Point, and until we reached that destination it was a bleak journey: few street lights, no stores open, sketchy men lurking in the shadows and the literal smell of decay at the then-rotting Inner Harbor. The Block was thriving, so that was cool, and Fells Point had a mini-East Village vibe going on (today it’s overwhelmed by sports bars and upscale retailers, although the Hispanic immigrants have pleasingly encroached on the territory) that was really quite bohemian. (Baltimore’s always a decade late in trends, so bohemia, anachronistic in San Francisco and Manhattan in the early 70s—Brooklyn didn’t count back then—really did exist.)

In the early 1980s, after spending time in D.C. to work at City Paper (local restaurateur Alan Hirsch and I founded that weekly, four years after starting Baltimore’s CP), I was always relieved to get back home, as were my colleagues. I’m sure Washington is a great place to attend college, but during the day, at least in the NW, it’s filled with people who all look and dress the same and reek of narcissism: doesn’t matter if they’re politicians, lobbyists, journalists or marking-time graduates filing papers at think tanks. Great chow and architecture, but not much else. (At least now, there’s the Nats as a real attraction.) Baltimore certainly isn’t a cosmopolitan city, but it’s comfortable, very friendly, and a splendid place to raise your kids.

I get a little nauseous just contemplating this subject, so I’ll quickly dispense with objections to Fisher’s story. This paragraph, after he says he’s “torn” about Baltimore, is a pip: “I’ll happily stop off in Baltimore’s Little Italy on my way down Interstate 95 heading home from a New York jaunt, and it’s a cheap pleasure to join other Yankees fans in taking over Camden Yards whenever the Bronx Bombers are in town. As long as Baltimore fans aren’t using their lovely ballpark, it’s nice of them to lend it to us.” Fisher’s taste buds must be dead, since the majority of Little Italy restaurants are now pedestrian-to-awful, and as for Camden Yards, well, last season brought the return of the O’s orange to the park.

He says he’s been informed by decades of hearing Randy Newman’s wonderful song “Baltimore” (“Hard times in the city/in a hard town by the sea”), even though Newman said a long time ago that he wasn’t writing about Baltimore specifically, just a generic city. Fisher loved The Wire (I did, too, but those who don’t are essentially considered illiterate by the cognoscenti), but is afflicted by “a pesky allergy to all things John Waters,” which is a nasty slur against the charming and unpretentious filmmaker. And naturally, Fisher writes about blue-collar Hampden, the neighborhood that young people tout as a haven for “hipsters,” although it’s not all that different than when I lived there as a student in 1976.

In fairness, Fisher does say Baltimore is a great place to explore—out-of-the-way spots that aren’t on the tourist trail, such as Harbor East, the tax-break heavy, anonymous neighborhood that could be situated in any Top 50 American city—even though he wouldn’t want to live here. Again, I’m not a native Baltimorean, so hometown pride isn’t an issue here. I guess I’m just sick of Washingtonians dumping on Baltimore, even while dispensing a compliment or two. Or maybe it’s just that I’m a reverse snob, since I so heartily dislike D.C.