What Will Happen After Iowa?

It's never too early or late to speculate. 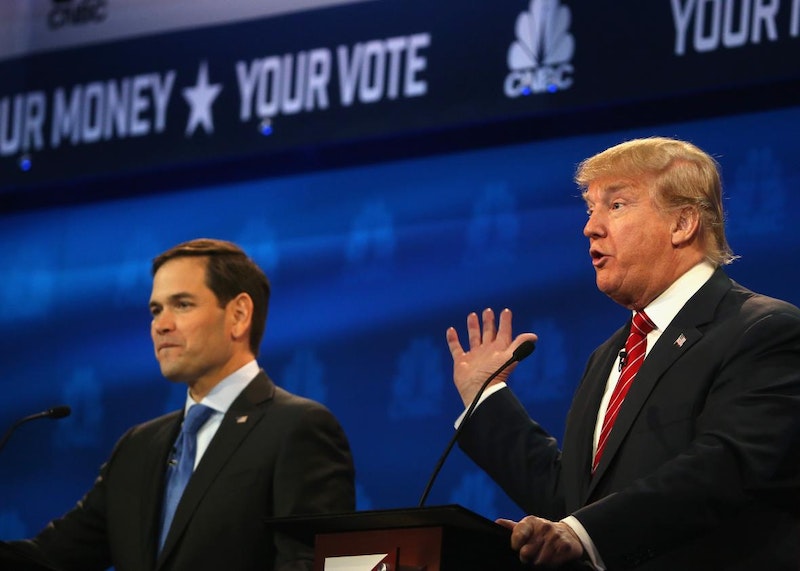 It's almost that time when pundits move on to New Hampshire. Before Monday hits and Iowa voters crawl out to caucus, though, there's one last chance to speculate about both Iowa and everywhere else at the same time. Here are four possible scenarios for the Republicans depending on how the vote goes in the Ethanol State.

Trump Wins: Going into the weekend before the caucus, Donald Trump's polling aggregate is 31.4 percent at Real Clear Politics. That puts him about six points ahead of Ted Cruz. If he hits that or higher, or a little bit lower, Iowa is going to be a huge win for him. Trump's fans are presumed to be less traditional Republican voters; no one is sure if they'll actually turn out to caucus for him. People also aren't sure how good or bad Trump's ground game is, or whether that will matter. If he does as well as polls say in Iowa, that's a hint that his polling is fairly accurate across the board, which is bad news for his rivals, since he leads by substantial margins in other early states like New Hampshire and South Carolina. A win by six points, therefore, will be treated as presumptive evidence that Trump can win the nomination, and give him a massive publicity boost, which may well help him push his polls even higher.

Will Trump actually win the nomination? I'm still very skeptical. Extraneous candidates (like Ben Carson, Rick Santorum, and Mike Huckabee) are going to drop out after Iowa no matter what. As the race narrows towards two or three people, Trump's going to have trouble, even if he's successful in the early states. But a solid win in Iowa will certainly make his opponents, the GOP, and me, worry.

Cruz Wins: If Cruz edges out Trump, the news media will treat that as a major upset. It'll be seen as a sign that Trump's voters are not likely to come to the polls nationwide, and that his candidacy is full of hype. Cruz will have a huge burst of attention going into New Hampshire, where he's currently third at 12 percent. That's almost 18 points back from Trump, but just half a point behind John Kasich. He'd almost certainly get a push to finish second, and could conceivably make up enough ground to win. This is a scenario that almost guarantees Kasich and Chris Christie dropping out sooner rather than later. It would also mean that Cruz is in for the long haul.

What if Trump beats Cruz, but by only a point or two? Given the polls now, I think that will basically be treated as a Cruz win and Trump loss. It’ll show that Trump is weaker than anticipated, and Cruz stronger.

Rubio Wins: Marco Rubio is currently in third at about 14.4 percent in Iowa. If he does much worse than that, polling in single digits, it might hurt him substantially, depending on who moves up. Dropping to fourth behind Carson probably wouldn't matter much; dropping to fourth behind Bush would be a different story. On the other hand, if Rubio beats Cruz, that might even knock Cruz out of the campaign. It would certainly put Rubio in a position to come in second or even first in New Hampshire, depending on how others do. It could also be the big story of the caucuses, depending on how much Trump under or over-performs.

If Rubio wins Iowa outright, or gets within a point or two of Trump, and then does well in New Hampshire, that could effectively be the end of the nomination race. Candidates from Cruz to Bush would be under tremendous pressure to drop out, leaving Rubio and a diminished Trump to slog it out, with the outcome never in doubt. Given the polling, this doesn't seem probable, but Rubio's not so far behind as to make it an impossibility.

Santorum Wins: It's unlikely that Carson or Jeb Bush will get more votes than anyone else in Iowa. But they, or someone else, could win the day if they do substantially better than expected. If Bush edged out Rubio, he’d be the major mainstream candidate again, and the favorite for at least second in New Hampshire. If Carson managed to beat Cruz, the latter’s cooked (though it's hard to imagine Carson himself benefiting much long term.)

If Santorum wins, we'll have to thank him for beating Trump, which will be a bitter pill. But he'll lose soon enough after that. He always does.