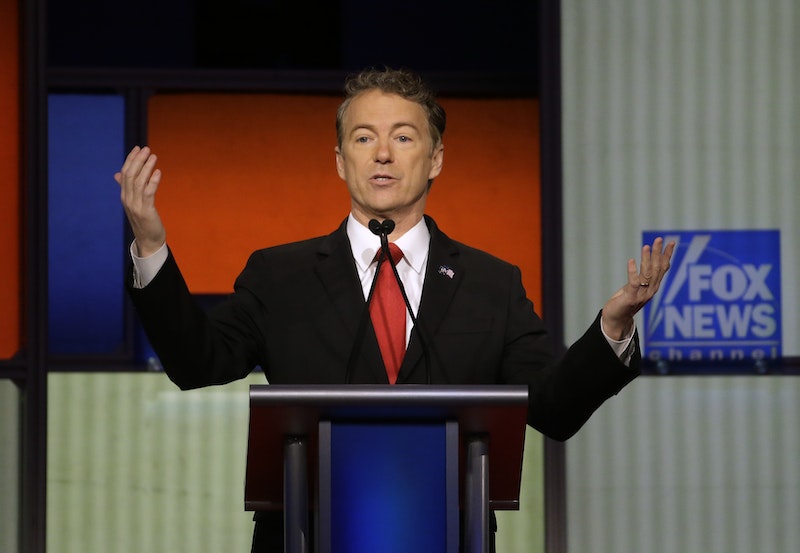 Thursday night was an education in alternative history. That's the genre of fiction where an author speculates how history would have unfolded differently if events had gone a different way. But one of the key things you learn from looking at enough alt-histories is that it's not that easy to know how things would have happened. We could see that as well watching the final Republican debate before the Iowa caucuses.

In this case, the alternative universe that we were sort-of peering into was one in which Donald Trump had never thrown his raspberry red “Make America Great Again” baseball cap into the presidential ring. It wasn't perfect alt-history, because people still mentioned Trump, who boycotted the debate, and because he’s already affected our present time stream to such a great extent.

Trump has forced other candidates out of the race, forcefully injected the immigration restriction issue deeply into GOP politics, cut the latest Bush down to size in the polls, and now threatens to walk away with the nomination. So he was there even in his absence. In her first question, Megyn Kelly addressed “The elephant not in the room tonight” and Cruz responded with a bad Trump impression, saying “I'm a maniac and everyone on this stage is stupid, fat and ugly. And Ben [Carson], you're a terrible surgeon.”

But still, Trump's presence was felt less than usual Thursday, and the debate was better for it, giving us a few fascinating might-have-beens. The most important ones to my mind had to do with foreign policy and civil liberties-related issues.

We saw that early on, even before they got to the questions. Sen. Rand Paul was mentioned and a significant portion of the crowd roared. Iowa “must be close to Kentucky,” quipped one of the moderators and we quickly heard of father Ron Paul's runs for president and the protest movement that started both within and without the Republican Party.

Fox News's Brett Baier told Paul, “Senator Cruz's campaign is out with a video saying Cruz is the intellectual and political heir to your father's 2012 campaign in the liberty movement.” He did this to drive a wedge between father and son and generate some conflict between Cruz and Rand Paul, but it's true that the Liberty Movement, a group of anti-war, pro-liberties activists quite distinct from the Tea Party, would’ve had a much better chance of influencing the debate if Trump's show, “the greatest show on Earth,” as Sen. Marco Rubio put it, didn't make the debate all about one man.

Absent the Trump show, and with the prodding of Fox moderators, we saw some fascinating exchanges and admissions. Fox proved, with copious video evidence, that both Rubio and Cruz have talked out of both sides of their mouths on immigration, and we got to watch them angrily deny it from the comfort of our living rooms.

Jeb Bush showed again why he doesn't understand what two recent wars and a busted budget have done to his family's political brand, saying that he “adore[s]” W., mockingly admitting, “I guess I'm part of the establishment because Barbara Bush is my mom.”

Chris Christie proved that you never quite take the “former” out of former prosecutor, by promising to throw the book at Hillary Clinton if elected over her mismanagement of State Department emails, and also pledging to restart the patently unconstitutional bulk data collection by the NSA.

Rubio, for his part, proved a passionate advocate for an almost messianic Americanism which would counter the forces of all kinds of nasty folks, including “this apocalyptic group called ISIS.” He implicitly endorsed the return of water-boarding, saying “And if we capture any of these ISIS killers alive, they are going to Guantanamo Bay, Cuba, and we're going to find out everything they know.”

Paul proved the voice of modest reason, giving an answer on criminal justice reform so perfect that it made my heart weep that this man is not further up in the polls. On Syria, Paul said the question is, “Should we be bombing both sides of that [civil] war? Some want to topple Assad. In fact they want they want to bomb ISIS and Assad simultaneously.” He called that a “really, really bad idea,” resulting, in a worst-case scenario, in “an ISIS that takes over all of Syria.”

It's not that these sorts of declarations and exchanges are absent from Trump debates. They do occur, but they tend to be overshadowed by personality clashes. It's hard to trump Trump as an issue and his point of view is already something that the other candidates are going to be forced to grapple with whether or not he's on the stage. So here's hoping somebody gives him a reason to boycott the next debate.