At least our fate will be clearer. 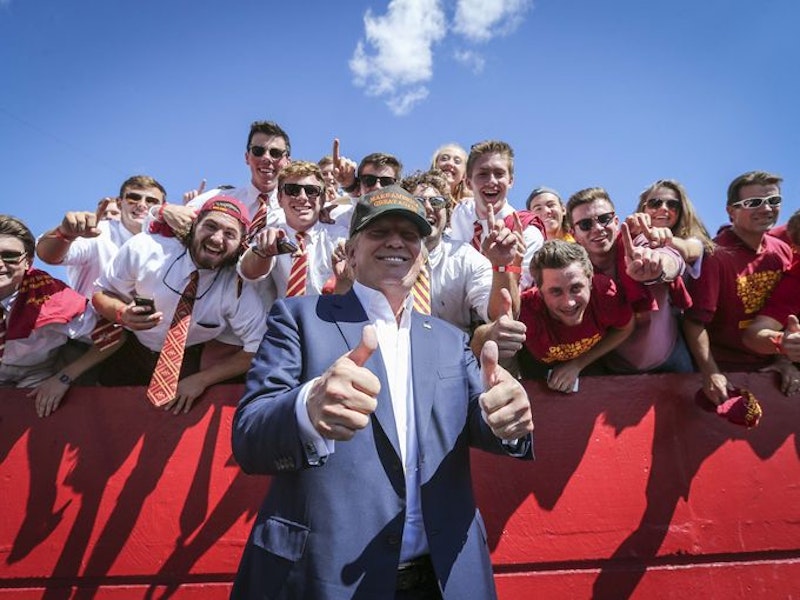 If Donald Trump actually becomes president, I think it’s going to be sort of like that time Homer Simpson got a chance to design a car.

Recall how Homer, speaking for the long-suppressed masses who had never had a real say in such decisions, said: “Okay, so you see how most cup-holders are teeny? They should be this big! Next: antenna balls! How many of you had problems finding your car? So you know what I mean. Those should be on every car! Next up: horns. I want a horn here, here, and here! You can never find a good horn when you are mad!”

If we’re not rescued from Trump in today’s Iowa caucus by his only substantial rival at this point, Ted Cruz (with Trump polling even better in later states), I think I’ll begin the coping by declaring this “Trump Week,” getting five columns denouncing him out of my system, and then move on to new topics for the next couple of months.

Some on the left must secretly realize that Trump, despite all the hurt feelings over his ethnic and woman-related remarks, is one of the Democrats’ greatest victories, as we are reminded by this brief montage of Trump enthusiastically supporting Democrat positions on everything from taxes to healthcare—and praising Hillary Clinton. Republicans have turned their party into a second Democratic Party. But then, some of us have been saying that for years. It’s just more blatant and obnoxious this time around.

Of course, William Kristol was still predicting a Rubio victory on Friday. Rubio has repeatedly enthused over authoritarian, anti-libertarian policy proposals, so my own futile hope will remain Cruz. However, if I cared only about party electoral victory, not policy, I would concede that either Rubio or Cruz could at least help the Republicans avoid the demographic destruction they face in the near future if they alienate the young and the Latinos. Gotta pick just one candidate to avoid Trump’s plurality, though, and Cruz keeps those populists aboard. Be smart.

In pure, unprincipled, Machiavellian terms, the Party’s smoothest strategic move right now would be to just do a complete amnesiac 180 on the anti-Latino rhetoric of recent months—in time for the general election—and have a candidate who talks about his south-of-the-border roots and praises “relocating to find the American dream” in vague but perro-whistling terms.

The Democrats are obviously winning their cynical war to turn the illegals influx into a mass of potential new voters—sometimes new voters with shaky i.d. but soon enough legal ones—and the GOP’s sole hope may be convincing those new voters to vote GOP after all. Stranger things have happened. But Trump can’t do it (and is a lying big-government con artist no one should be voting for to boot).

But for the moment, it looks likely that instead of the GOP race winnowed to Trump vs. one strong anti-Trump, it might be that Trump keeps soaring while the two remaining potential anti-Trumps (Cruz and Rubio) just destroy each other.

I’m not giving too much thought to any of the other candidates now. Although they have no souls, I expect at least half the GOP candidates to do the right thing and drop out after Iowa, since they know they may damage their reps in Republican circles by hampering the effort to create a unified anti-Trump candidate. I think everyone who ends up in single digits should stop now, even if that leaves only Trump, Cruz, and Rubio—plus the lingering moderate trio of Bush, Kasich, and Christie, who play just well enough among moderate elderly New Hampshire voters to hope for a comeback next week.

Once they’re gone, though, it’s a three-man race in which the most important thing becomes getting rid of Rubio for Cruz’s sake. If instead both men linger and scrap for second place, Trump will not only get the last laugh but also get it at the expense of a pair of Latinos wrestling for his entertainment, an ironic twist he doesn’t deserve.