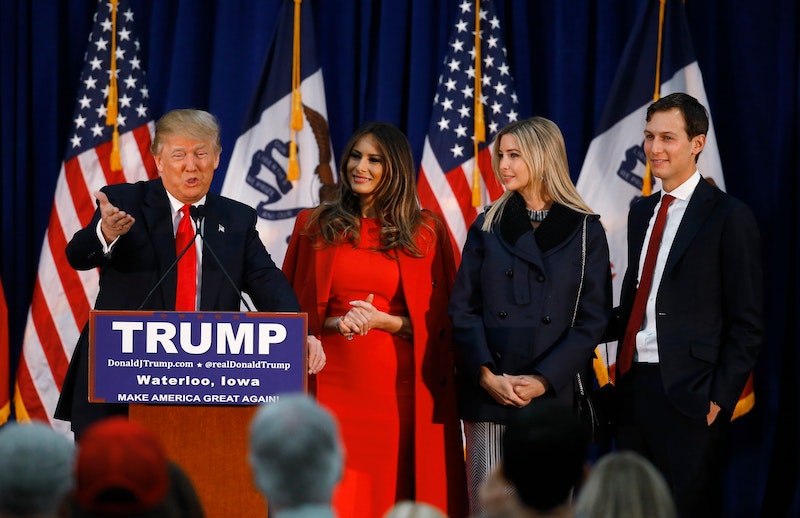 “The system is rigged!” Bernie Sanders shouts, and the crowd loves it. They’re a happy bunch, and on screen they’d appear to be a sea. The old man who normally sits at the bus stop has been parked behind a microphone; grappling his podium, he chants what he has to say about America and the rich. Meanwhile, faces and voices throng above and below him, in front and behind. He’s in some vast space stacked with noisy people, most of them young, all of them delighted with Sanders and the vote in Iowa.

When his speech is done and he ambles toward the exits, the old man from the bus stop has to be kept from walking off in the wrong direction—an aide takes his elbow, and she looks like somebody’s very good great-niece. Guided straight, Bernie turns a corner around the podium’s base and he’s walled on either side by hands reaching out for his. It’s like Obama passing among the Democratic congressmen before a State of the Union, only much more so. When Bernie rounds the corner, a girl shrieks. It’s like she decided at that moment she was a girl at a Beatles concert.

As of 1:55 a.m., with 99.4 percent of the vote counted, the race was still too close to call. So Bernie won or it was a tie. Or, in Hillary’s view, either she won or it was a tie. When a race is this close, both contenders are doing all right. Of course, Sanders is doing a better kind of all right. Clinton was the Secretary of State, he’s the Senator nobody much heard about. Yet he has her toe to toe, and he’s doing it thanks entirely to citizen donations that average $27. He can raise a lot more of that.

Loser. Donald Trump huffed and puffed and the house didn’t fall down. After all those months with the Tweets and the noise, he didn’t win Iowa. The polls had him up by seven points, but then people voted and he finished down by three points, three and a half. Ted Cruz came in first. Trump had walked out on the last debate, and his absence created a vacuum in which the other candidates fell to pummeling Cruz. Pundits thought the beating up might stop Cruz from placing first in Iowa. But Cruz had the power of 150 pastors. He had Steve Deace (the Senator gives a shout-out during his victory speech), he had Steve King and Bob Vander Plaats (they’re up there on stage). Cruz had Iowa’s hard-right Christian faithful wired pretty tight; he had the operators who belong to Iowa proper. Trump had Sarah Palin, a bedraggled celebrity fished from the national fame pool.

Trump behaves like a gentleman at his concession. He’s still got something warm for Iowa. He’d like to slip her something quick sometime, like buy a farm there. He’s subdued. Trump’s right arm, his gesturing arm that normally leaps and staggers in the airspace next to his torso, now hikes itself up and winches itself down, but it doesn’t go too far in either direction. Not tonight.

Much earlier in the broadcasting day, a savvy Fox correspondent said Cruz’s people talked like they saw victory coming and that Trump talked like he didn’t. Perhaps Trump has spent a few days facing defeat and has got his head in the right frame for a concession. He can’t declare voter fraud and say something snotty about the state party chairman and his risible moustache. This isn’t like Megyn Kelly and getting mad about her mean questions. Or it is, a bit, in that Trump boycotted the last debate before the caucus just to protest Kelly, and then he lost. Turns out there’s a price to pay, so tonight he acts like Trump the sober and decent.

“On to New Hampshire,” he says to a crowd that really looks like just a roomful of people, and not very excited people. “Good night everybody,” he says and turns from the podium. He exits in a file with his children and their spouses, and that’s a lot of hair on parade, what with the daughter and daughters-in-law. It’s like shiny little waterfalls had been issued to them. Noticing the hair, you notice the suits and the ensembles. These people don’t look like they belong in Iowa. Wealth is supposed to be Trump’s calling card, but maybe it’s more charming when farther away.

The caucus factor. A caucus, like they have in Iowa, tends to help candidates who rely on the grassroots. Activists turn out to vote even when doing so involves standing around a high school gymnasium all evening. Hillary Clinton isn’t counting on the zealot vote. Donald Trump does count on it, but his zealots—those Trump-crazy citizens—are by way of being impulse voters. Their fervor doesn’t normally translate into political activity but into buying something. In this case what they want to buy is Trump and the way they have to do it is by voting. But make your typical consumer jump through hoops and he loses interest in buying. Go to a booth, turn a lever—well, okay, maybe. But standing around is something else.

Looking ahead. Absolute best outcome, from my point of view? What we’re getting, but Hillary wins. Ted Cruz beats Donald Trump by a decent spread; Hillary and Bernie tie, but with Hillary a few votes ahead so she doesn’t get tarred with a loss. Cruz and Trump battle deep into primary season, as do Sanders and Hillary. The Cruz-Trump battle results in Trump going third party while Cruz gets nominated. The Sanders-Hillary battle results in Hillary having the left on her back all the way to the convention, at which point she gets nominated. She promises Elizabeth Warren the SEC and doesn’t renege. She runs against a Republican Party that has split in two, each half loathsome to the broad public, and she struggles on toward keeping Wall Street and the corporations from destabilizing American society. I don’t say all this will happen, just that last night we got off to a decent start.