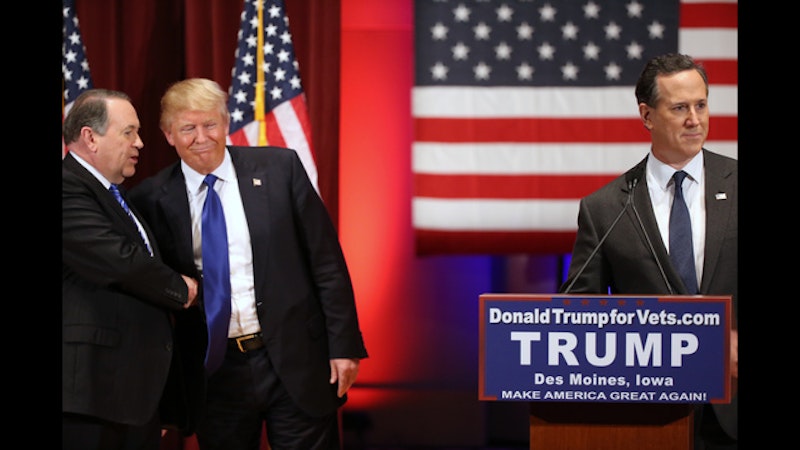 Regardless of arguments made or not made in the Republican debate last night, as I write this a few hours earlier, the important development seems to have been Donald Trump announcing in a huff that he wasn’t planning to participate—followed by Mike Huckabee and Rick Santorum saying they’d head out after the early undercard debate among less-popular candidates and join Trump at a veterans’ event (not so long after Trump made headlines for insulting veteran John McCain, remember, but that was a century ago in media-years).

It‘s not just that scheduling-chaos was interesting to behold—including the tantalizing possibility of Carly Fiorina eviscerating Jim Gilmore to prove she’s still a viable VP pick. It’s that it’s no longer clear who gets to decide what counts as an important conservative event—or for that matter who counts as a conservative.

Trump has now shown an amazing indifference to both National Review (in the wake of its anti-Trump issue) and Fox News—even after several of the latter’s on-air personalities seemed to spend several days saying extra-nice things about him and even dismissing the significance of National Review, the flagship magazine of the conservative movement for more than a half-century.

But if, say, anarcho-capitalists like me are arguably marginal within the libertarian movement; libertarians barely influence the large adjacent conservative movement (or modern liberalism, for that matter); the conservative movement’s most prominent magazine doesn’t matter too much to some Fox people; Fox/GOP debates don’t count for much in the eyes of some candidates; and most of those candidates are too far down in the single digits in the polls to faze Trump, where does right-leaning political legitimacy, if any, come from these days? Are all those accumulated decades—centuries, even—of political thought rendered irrelevant in an instant now by a big enough Twitter followers count and some reality TV gigs?

Media evolves very quickly these days, and no sooner had we begun wondering if organizations such as Fox have the power to decide who will win elections than we may instead have to prepare for talk of Trump as “the Twitter president.” (Or maybe Trump just started to think it would be great for one night to let his chief remaining rival, Ted Cruz, take the brunt of all the moderator questions and rival candidate jabs.)

I’m usually quite skeptical of any sort of “credentialing institutions” (colleges, award shows, etc.) because they so easily become self-aggrandizing, but I also shudder to think how much more “counter-legit” this process gets if layers of old-school conservative institutions can be trampled so easily. Don’t assume the buck stops with Twitter, of course, at least not for long. I’ve got plenty of acquaintances who think that useful social media platform has discredited itself by booting off people like trouble-making conservative writer Charles C. Johnson while barely policing people using tweets to coordinate actual violence. Perhaps Johnson will stand above in final judgment, then. (He seems to like Cruz. Maybe there’s still hope for Cruz, then…)

But seriously, who or what will emerge as the ultimate arbiter of real, definitional, non-RINO, non-“cuck” conservatism (if people insist on using such ugly terms) to one day dismiss Trump himself—while perhaps bearing even less resemblance to traditional conservatism than Trump does? Some very mean Instagram user who only cares about guns, perhaps? Or Jimmy Carter maybe? I’m no longer certain of anything.

Maybe President Sanders can sort it all out next year. Or President Bloomberg. But not President Murray. Apparently, claims Bill Murray is running for president were a hoax, so I shouldn’t have been so quick to repeat that report yesterday. I’ll just keep waiting for the Libertarians to (probably) nominate Gary Johnson and hope the next bizarre, unexpected thing to happen to democracy this strange year revolves around him.