What We Know About Jackie 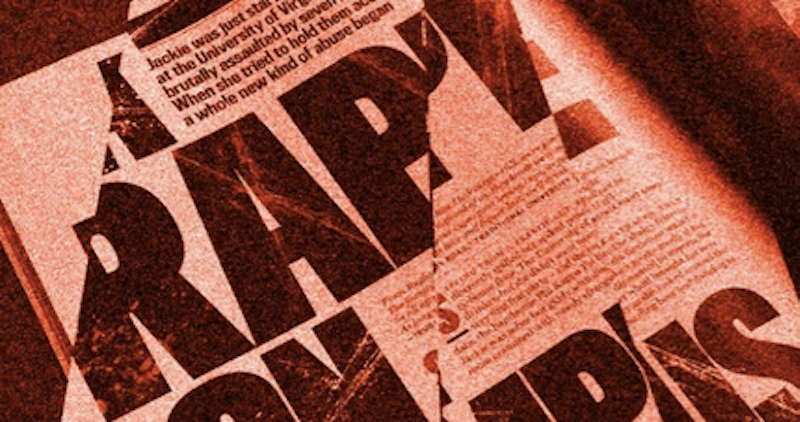 It's too bad about Jackie: she's a big, big habitual liar. Either that or Sabrina Rubin Erdely has constructed a work of art, a fake pixel trail that fooled the people from Columbia University. “A Rape on Campus” is bullshit at its core because bullshit came out of Jackie's mouth. She lied about her friends and to her friends. She invented a boyfriend (a fact uncovered by the Daily Caller and other publications), then told her friends the boyfriend raped her, then told a reporter the friends had said cold, self-centered things, then told a second reporter that the first reporter had strong-armed her, kept her in the first reporter's big article when Jackie wanted out.

“Erdely said in an interview for this report that she was completely surprised by Jackie's statements to the Post and that Jackie never told her she wanted to withdraw from the story.” That's from the Columbia people, and Erdely is the Rolling Stone reporter. Here's someone else who had a surprise: Ryan Duffin, a friend of Jackie's from freshman year. Erdely wanted to talk with him, and Jackie said her friend had answered this way: “No!… I'm in a fraternity here, Jackie, I don't want the Greek system to go down, and it seems like that's what you want to happen… I don't want to be a part of whatever little shit show you're running.”

Ryan was surprised to hear he had said this. The Columbia report: “The entire conversation with Ryan that Jackie described to Erdely 'never happened,' he said. Jackie had never tried to contact him about cooperating with Rolling Stone.” At least Jackie had waited a while to dump on Ryan. Up until then, she'd been telling Erdely that the boy was the one friend who wanted her to seek help. The others shot down the idea as she stood there crying outside the frat house. They said the cold, self-centered things, callous things about maintaining their social lives, rape culture things: “She'll be the girl who cried 'rape.'” But Ryan Duffin had been on her side. Actually, it seems they'd all been telling her to go to the authorities, but Jackie's rendition gave that role to the one boy. Then this turnaround. The reporter wants to talk with the fellow, and Jackie comes back with an account of him raving about the Greek system. It's like Invasion of the Body Snatchers. But the reporter shrugs. “'Ryan is obviously out,' Erdely told Jackie a little later.”

The reporter said that, not the source. Erdely's major goal was to keep Jackie in the story. That way she had an article about a prolonged gang rape with broken glass and people saying “Grab its motherfucking leg” and “We all had to do it, so you do too” and “Don't you want to be a brother?” A gang rape apparently performed as an initiation rite, and in a fraternity the victim was willing to name. An article about that was something. An article just about campus rape really wasn't so much. Erdely and Rolling Stone went to some lengths to avoid getting stuck with such an article.

As Homer Simpson said, “It takes two to lie: one to lie and one to listen.” This is not true all the time, but in Erdely's case it was overwhelmingly true. A good reporter sees the truth as something that is extracted, not something that is given. But Jackie had given Erdely the glass-table extravaganza, and that was all Erdely wanted. Her goal became making sure that Jackie didn't take it away. The girl was skittish after all, a survivor. Who knew what could make her take off? For Erdely, the situation was like having a loose tooth: she became very, very careful. From her notes: “I work round Jackie, am I going to drive her from the process?” She couldn't just do some looking around and call kids likely to know Jackie from freshman year. But The Washington Post could, with cataclysmic results.

The Columbia people don't blame Jackie for the mess. Their focus is on the professionals, the Rolling Stone crew. Yes, the crew's performance was awful. Erdely collaborated in greasing her source's bogus account past the truth. She didn't just neglect to call the necessary people; when she contacted the frat that Jackie accused, she left out all the details of the allegations so there was nothing they could shoot down. Erdely says she assumed the frat was filled in by the university. If so, that's something she wanted to assume. If she had really wanted to verify facts, she would have given them in her email. Her editor also appears to have been hypnotized by the story. The two of them would kick around the need to contact the friends who were being vilified, or to locate the boy being accused of rape, and then they would figure, hey, just put fake names on everybody. The managing editor was fine with it. Biting his lip and looking back, he offers this analysis: “We never sort of allowed for the fact that maybe the story we were being told was not true.”

Obviously, somebody needs to be fired. Instead the magazine has affirmed that everyone will stay on and that it will buy more articles from Rubin Erdely. This is absurd. Yet I think that Jann Wenner, the boss of Rolling Stone, offers a good analysis of the overall situation. From the New York Times: “The problems with the article started with its source, Mr. Wenner said. He described her as 'a really expert fabulist storyteller' who managed to manipulate the magazine’s journalism process. When asked to clarify, he said that he was not trying to blame Jackie, 'but obviously there is something here that is untruthful, and something sits at her doorstep.”' He said it, but then he danced away.

As far as I know, a few parts of the Jackie story still hang on as true. She was crying and seemed traumatized, and her friends were sure she wasn't acting. A suite mate from freshman year says Jackie went from happy and outgoing to severely depressed. The police chief who investigated Jackie's story and found nothing was careful to add this comment: “That doesn't mean something terrible did not happen to Jackie on the evening of September 28, 2012.” I defer to his judgment, and when the story first broke I thought Erdely was the villain and Jackie the poor schmuck who was dragged along. But that was before her ex-friends stepped forward and Haven Monahan (her fake boyfriend) came to light with his duped phone numbers.