Looking Forward to a Trump/Clinton Showdown

How did we get here? 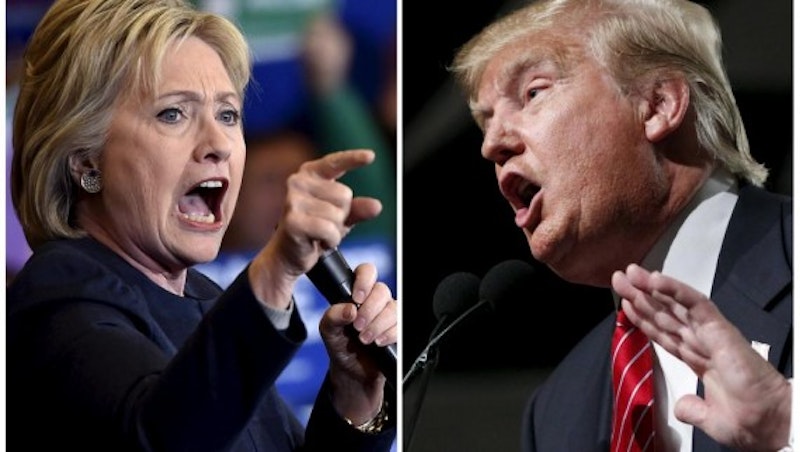 At least some of Bernie Sanders’ success can be credited to Reddit, the self-acclaimed “front page of the Internet.” On r/politics, posts about the candidate land on the front page hour after hour. While there is a "Bernie Sanders Sucks" subreddit, it has a tiny fraction of the subscribers to r/SandersForPresident. In this case, Sanders lucked out, because none of his millions of donations at just $27 dollars apiece had to go toward advertising—the Redditors did it themselves. Impressively, but not surprisingly, Sanders picked up $2.3 million on Reddit as of late March.

On the other hand, Hillary Clinton has struggled to pick up traction on platforms that don’t offer paid advertising. Her subreddit only scored her $16,000. Last month, one of the PACs supporting her campaign spent $35 million on Internet ads in swing states, all targeted at millennials. Despite her best efforts, even Barack Obama concludes that she and the Internet aren’t an ideal match. In his White House Correspondent’s dinner speech, he poked fun at her online awkwardness, saying, “Hillary trying to appeal to young voters is a little bit like your relative who signed up for Facebook.” Then, in a mocking old lady-voice, “Dear America, did you get my poke? Is it appearing on your wall? I’m not sure I’m using this right. Love, Aunt Hillary.” I’m sure that Clinton shrugged it off though, after Obama gave her a pseudo-endorsement earlier in the night when, in talking about the next president, noted that it’s “anyone’s guess who she might be.”

On the Republican side, the GOP hardly has a need for marketing, especially Donald Trump, who swamped every other candidate in media exposure on every network from FOX to Comedy Central. Trump has received more than $2 billion in free advertising. Maybe in an effort to have just one truly successful business venture, he planned this whole thing out. But that’s giving him more credit than he probably deserves. Not surprisingly, a feud broke out between Ted Cruz—who’s now out of the race—and Trump over a meme showing a naked Melania that read, “Meet Melania Trump, your next first lady. Or, you could support Cruz on Tuesday.” Trump pointed his finger at Cruz on Twitter, threatening to “spill the beans” on Cruz’s good Christian wife, Heidi. Sure enough, days later, the “Ted Screws” sex scandal broke out. The true damage done was that America was forced to think about Cruz’s sex life.

Has Clinton proved that Internet marketing doesn’t matter? Has Trump proved that there’s no need to buy advertising? Probably not. All that's left to do is throw the Jiffy Pop on the stove and watch as Clinton and Trump claw out each other’s eyes this fall.