2020 has it all: thug cops, an in-and-out pandemic, shuttered businesses, sanctimony and a presidential election that could wind up in litigation. 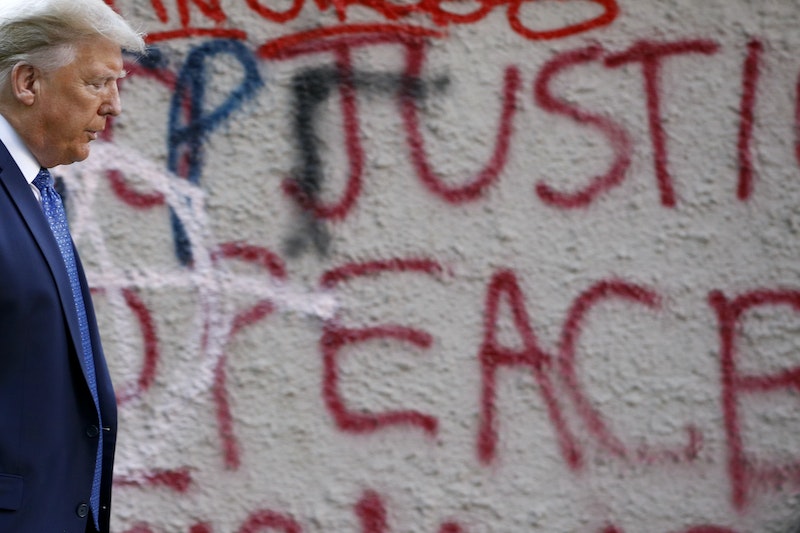 Paraphrasing a 1974 Hunter S. Thompson quip, when the going gets strange, the strange get stranger. You could’ve said that about 2020 in early-March, April and May, correctly, and instantly have to revise the next day, let alone week. I’ve seen people write, not trying to make a funny, that this year is 1861, 1918, 1929 and 1968 all rolled into one, but that combo don’t fit: Americans have never seen a three-month period, at least in modern times, that’s so combustible and panic-stricken. That the media of just 20 years ago no longer exists has exacerbated the frenetic news cycles (if not pace of life, which until last week had mostly been sedentary because of COVID-19).

By the way, what public officials will bear the brunt of blame if the recent mass gatherings of people throughout the country—not the families picnicking in the park or kids swarming beaches and boardwalks, but the George Floyd protesters, looters, rioters, useless cops—if there’s no enormous uptick in virus cases? What will Trump or Fauci or Cuomo or DeWine say to the unemployed worker who asks, “Where do I go to get my job back?”

Just two weeks ago I wrote a column that I thought was right on the nose: the gist was that November’s presidential election, hampered by in-mail voting (and with a compromised USPS ill-equipped for such a vital task) was up in the air; in fact, with such a jury/jerry-rigged system the results might not be known for weeks. (And Tuesday’s Maryland primary was messed up.) The idea was that COVID-19 would prevent, in most of the country, and definitely in large urban centers, live voting. Now, in early-June, I’m not so sure: maybe it’ll be business as usual at the voting precincts. Governors of the 50 states could simply say, “Fuck it, we were too cautious about the virus, so let’s proceed (but with facemasks!) like normal.”

And if that’s the case, watch out incumbents of both parties, since Americans could easily want to throw out the lot of them, including Trump and Senate Majority Leader McConnell, but perhaps Nancy Pelosi, Ilhan Omar and Alexandria Ocasio-Cortez as well. Those are just the high-profile names, and in fairness, Joe Biden is an honorary incumbent. Govs. Andrew Cuomo and Gavin Newsom, of New York and California, respectively, are lucky they’re not up for reelection (although both could be subject to recall, same with New York’s lost-in-the-weeds Mayor de Blasio): both starred in the first weeks of the virus crisis, but have since been the object of anger and ridicule for their lockdown policies.

Especially Newsom. California’s been relatively fortunate in the number—just over 4,000—of COVID-19 fatalities (maybe the nursing homes and hospices are better there) but Newsom impersonating Michael Bloomberg in his control of the state’s citizens has flipped California this way and that way and who knows what the result will be. Taxes will rise significantly across the country next year, both on a federal and local basis, and Californians, already soaked, will feel more pain. And Newsom’s threat to fire first responders if federal money wasn't sent his way made the guy look petulant. It was a Trump move, while acknowledging there is only one Trump.

Anti-lockdown voters will not be an insignificant force this November, nor will people disgusted by their local officials’ impotence during the non-peaceful “protests.”

(Trump’s photo-op on Monday outside St. John’s Episcopal Church was, one the one hand, necessary to assure his supporters he wasn’t the Baby in the Bunker; on the other, talking about calling in the military since the country’s governors were looking like “jerks” was inflammatory, as was the tear-gassing of protesters getting in his way. And, on my third hand, the sanctimonious criticism of Trump holding a Bible upside down (that’s a surprise?) was grating: I had no idea that in this era of diminishing attendance at houses of worship, that seemingly 40 percent of the country was suddenly born-again.)

Right now, most of the media is fairly confident that Trump (whose polling numbers, for what they’re worth, are on the floor) will lose, perhaps significantly, to Joe Biden, which is the same view as last year before 2020’s havoc, but how can they be so certain? It’s true that Biden isn’t as hated as Hillary Clinton, a plus, and he’s carrying just four steamer trunks of baggage as opposed to her 12, but then Hillary wasn’t perceived as on the wrong side of early-dementia. Biden’s coherent “healing” remarks on Tuesday were given a lot of attention (“That’s what a president looks like!"), justifiably since it still appears he’ll run against Trump (unless… repetition alert, the DNC comes to its senses and installs Bernie Sanders who’d have a far greater chance of winning, picking up unemployed Trump voters with his welfare-state promises).

Biden, in case you’ve forgotten since this column is appearing on June 4, lit up the Internet with this howler on Monday, suggesting cops ought to be trained to shoot bad guys and gals in the leg instead of the heart. What got lost was this: “Instead of standing there and teaching a cop when there’s an unarmed person coming at them with a knife or something…” Is a knife not a weapon?

I get that a percentage of Sanders voters are “doing the right thing” and riding the Biden locomotive, but there’s a significant amount of holdouts who just won’t vote. This Facebook post from a friend of mine, a steadfast Bernie supporter, is instructive: “Right now, I'm seeing a lot of folks blaming Donald Trump for the violent protests inspired by Officer Chauvin's appalling murder of George Floyd. This is like blaming the paint job for leaky pipes inside the walls. Minneapolis has a Democrat mayor and a Democrat governor. Furthermore, former Democratic presidential hopeful Amy Klobuchar failed to bring charges against Chauvin for a fatal shooting in 2006, when she was Hennepin County attorney, (her excuse is that she was already on her way to the Senate). But never mind, blame it all on Trump, and pray that replacing him with the guy who wrote the '94 crime bill will in any way address the problems of systemic racism and police militarization.”

New York Times scold/op-ed columnist Paul Krugman, the very rich guy in populist’s clothing, wrote on Tuesday: “I don’t think it’s an exaggeration to say that America as we know it is on the brink.” Never mind that Krugman’s expressed the same mock-worry repeatedly during the Bush and Trump administrations (he napped while Obama was in office, except to poke a stick in the Tea Party). I have but one question: on the brink of what?