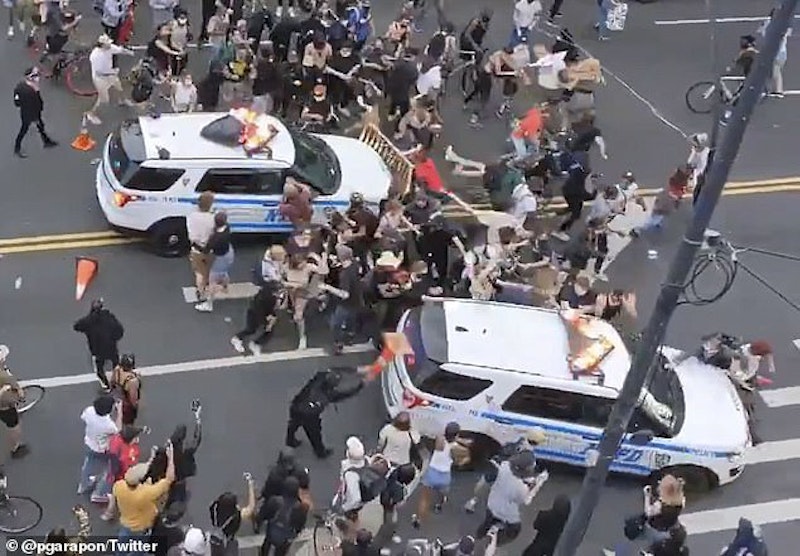 The violence and rage of cops across the country cannot be understated. No police department has “shown restraint”—showing up to peaceful protests in riot gear is a provocative action. I’m not sure if network news is showing it, but there are hundreds of videos on Twitter showing police arresting people for no discernible reason—for walking to their car, doing their job (whether as nurse, journalist, or cameraperson), or even sitting on their own porch—and still many more have been shot and permanently wounded over the last week. Getting shot with a rubber bullet doesn’t need to be qualified. It fucks you up.

#BlackOutTuesday came and went quickly, dismissed as a "well-intentioned" (sure) opportunity for white people to post and get lots of likes for an expression of solidarity with #BlackLivesMatter. This just clogged social media feeds from urgent information for and from protestors on the ground. Another fantastic display of solidarity! But it was all over so fast.

The rest of the country is learning firsthand what kind of crazy tactical military gear every police department in America has now. In Ferguson, and then in Baltimore, the gear itself was horrifying. But even here in Baltimore in 2015, the cops spread out their incidents: beating up photographers, locking people in and causing riots, looting pharmacies—but they never rammed crowds of people with their cars, on the third day. Cops across the country are acting like starved Coliseum lions ready to feed on weakling serf meat.

And so for the affluent, the privilege, those who couldn’t or didn’t really want to go out and protest this past week—what to do? “How can I be an ally?” Like this year’s presidential primaries, it appears that most people have retained absolutely nothing from 2015. If you’re white and you support #BlackLivesMatter and you feel bad that this country is built on the blood and bones of African slaves and indigenous populations, then there really isn’t much you can do—at least not in public, or online.

Six years after Michael Brown was murdered in Ferguson, five years after Freddie Gray was murdered in Baltimore, an alarming number of white people that live here and were here during the Uprising are still flailing, searching for ways to help in public and look virtuous and explicitly non-racist—in public. It’s not enough to retweet activists on the ground or share resources for protestors and political causes on your story: one must make a declaration of their adamant, active anti-racism.

A patronizing display of a group of white people kneeling and “begging forgiveness” from a group of black people at a protest; others, more pathologically, who insist the distrust and disgust “on behalf of my race and my ancestors.” The arrogance to assume that any individual is an ambassador of their race. You tell everyone you’re going to be a human shield “for black demonstrators” and use your precious white body to take the blows of batons and rubber bullets. For what? So you can lose an eye like Linda Tirado? So you can die like Heather Heyer? What I see online is a lot of white women expressing their most fetishistic views toward black people when most of them are bored in quarantine and desperate to get out of the house.

(I single out white women because it’s the only group I’ve noticed using this “human shield” rhetoric, always emphasizing how precious and pure their bodies are to the police compared to their black brothers and sisters. In a since deleted tweet, one woman even laid out an outfit as an example, the most lily-white thing imaginable. Deranged isn’t even in the same universe as this behavior.)

And to not ever realize how racist that is in itself. Like the black squares, they are a hollow gesture of solidarity that does less than nothing, it takes up space and bandwidth for no reason other than the depleted dopamine receptors of people who can’t stand being locked inside for weeks at a time. This isn’t a vacation, this isn’t Coachella, this isn’t a social event. I’m stunned by the number of white friends I have that were here in Baltimore in 2015 that are parroting the same self-serving, sanctimonious bullshit that was widely decried at the time.

Everything we learned about “being an ally” in 2014 and 2015 remains true. It doesn’t take long to learn: if you go to a protest, just go. Don’t start a chant, don’t lead a group of people, don’t say shit. Listen. And continue to pay attention and critique these problems always, not just when Instagram and Twitter are clogged up and you don’t know what to do. That’s it. You don’t have to read Marx or the complete works of James Baldwin to support #BlackLivesMatter.

But to offer yourself up as a sacrifice, a human shield “on behalf” of your race? You’re assuming power and fetishizing a minority while reaffirming your “inherent” superiority. As if we needed a reminder. My friend Leigh Ann nailed it: there’s such a pressure on social media not to be a good person but to not be a bad person, and it’s unbelievable how many people are insecure about their own “goodness.” Honestly, worrying yourself sick about how inherently powerful you are (while bemoaning your lack of power in elections or police brutality), for all of your friends to see, is just as sickening as cops kneeling.