People are angry and with good reason. 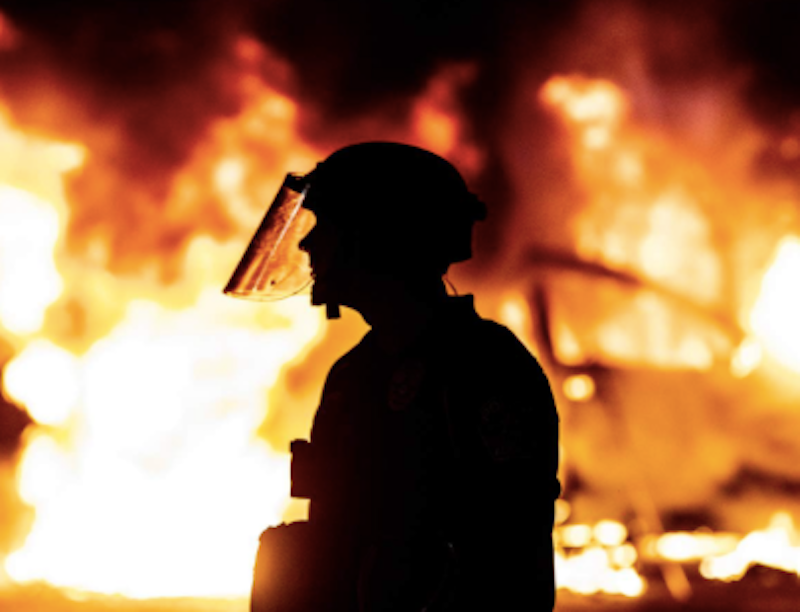 It’s always the same. The non-violent protests are weirdly beautiful, people coming together to call for change in a quintessentially American fashion, a Constitutionally-protected form of highly public, yet also personal, political dissent. Those scenes taking place across the country seem to affirm everything right and true in our national character even as they point out our dysfunction.

One sees images of people reaching across barricades or “taking a knee” in a gesture of solidarity with those who’d otherwise be regarded as antagonists or outright enemies. Witnessing it gives reason for a little optimism in spite of all the recent tragedy on display and the President’s inability to act beyond posturing, invoking police powers, and taking cover.

But after the photo-op, when the sun begins to set, one sees a different sort of behavior. A horrible parity emerges between cops and robbers—the former excited by the prospect of shattering skulls, the latter by the prospect of shattering windows. From then on, it’s felony riot, looting, and armored police dishing out tear gas, rubber bullets, and beatings just short of lethal force.

It has gotten so bad that Vox termed the police “counter-protesters,” referencing Brooklyn journalist Zeeshan Aleem: “Even when it became obvious that a protester was cornered and helpless, officers continued to attack the individual with their batons, making them look ‘like a literal mob.’”

And because every demonstration seems to follow this general pattern, the aforesaid parity is not only predictable but also tragic in its own way, a grim reminder of the broken, bewildered state of the nation, as darkly magnetic and disturbing as the earlier images of reconciliation and togetherness were positive.

As a liberal who worries about climate justice, literacy, and whether my branch library has enough accessible reading tables, I’ve spent a heart-breaking week staring at cell phone footage on Twitter, Unicorn Riot’s live feeds, and CNN’s constantly updated briefs on the protests. I’ve also been reading a lot of American history, mostly about civil rights in the 1960s. But it’s hard to look away from “history unfolding in real time.” They say the “cool zone” is a great place to read about but a lousy one to live in. Unfortunately, that’s exactly where we happen to be, all of us, together.

I’ve been at a loss. I’ve felt shocked and saddened by the violence and outraged at the ring of truth in the protest claims. I wrote a vehement blog post about how the chaos makes a surprising kind of sense from the point of view of an oppressed people and quoted James Baldwin from his famous 1968 Esquire interview, in which he asks: “Who is looting whom? Grabbing off the TV set? He doesn’t really want the TV set. He’s saying screw you. It’s just judgement, by the way, on the value of the TV set. He doesn’t want it. He wants to let you know he’s there.” I believe this is true, even if the looters aren’t fully aware of it and think they’re just out for a widescreen and a new pair of shoes.

Moreover, I’ve thought a lot about how white silence amounts to complicity, but also about intentionality and how unintentional silence about racial and economic inequality can only be adequately addressed and rectified through education, awareness and sincere communication. Education usually seems like the answer to inequality and bias, as it is to most social ills. It’s not surprising that education reform is critical in the United States right now, especially with COVID-19 causing widespread school closures.

But on the seventh day of the protests, I had to say “Enough. I need a break.” I’d spent all day, every day in front of my laptop, transfixed by the chaos. In my powerlessness, in my inability to act, being geographically distant from most protest activity and therefore consigned to merely read, watch, and worry, the only concrete opinion I could formulate was in response to the loud online condemnation of the looters coming from Trump’s supporters. What did you expect from people consistently diminished, invalidated, intimidated, imprisoned, and murdered? People are angry and with good reason. Angry people break things and misbehave. Gassing and night-sticking them only gives performative evidence of brutality, makes everyone angrier, and perpetuates the cycle of violence.

After watching Trump’s Rose Garden address, which was as chilling as it was unsurprising, I noticed how riot squad brutality seemed drastically intensified as a result. I noticed that protesters across the country, especially in Washington DC, seemed oblivious to what they were walking into. And I came to a conclusion: without quiet, there can be no meaningful conversation; though, wilful silence is a large part of the problem. And lip service from those in positions of authority is not the alternative. It solves nothing.

As protests become riots and riots become opportunities for rage-fuelled destruction, almost on cue, frustration and unrest perpetuate until neighborhoods and lives are tragically destroyed. That’s not the way of progress and redress. Healing doesn’t happen in a paroxysm of rage. It happens once the adrenaline has been vented, once the tear gas dissipates.

I don’t have an easy answer to the civic and moral conundrum America has constructed for itself. But I know one thing: we need compassionate and charismatic leadership. We need all Americans to be given dignity, real opportunity, and a voice. We need to rebuild from this multifaceted tragedy running wild in our streets. And we need these things before the next pandemic or catastrophe inevitably comes along and lays us low.

When will we start listening to each other?