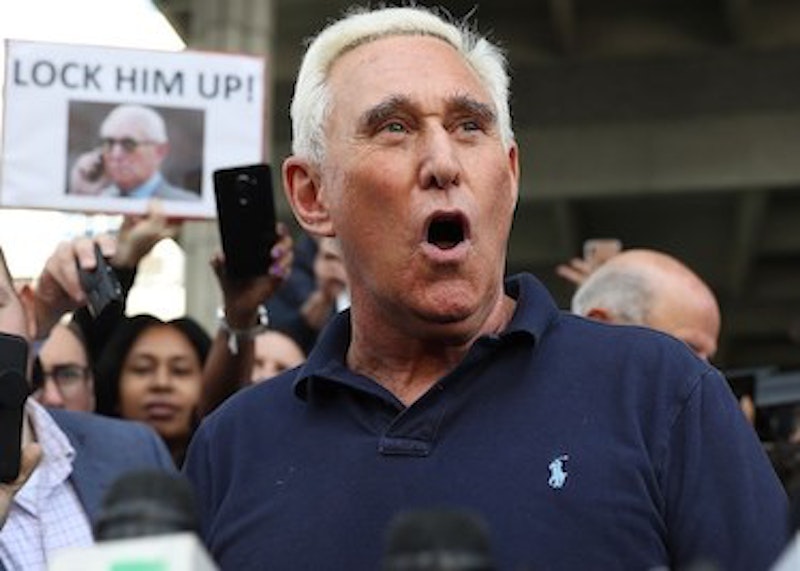 Trump advisor Roger Stone’s arrest vindicates the fear that “first they came for the conspiracy theorists”—as the law did for Stone associate and conspiracy theorist Jerome Corsi recently, and as I described the law doing for conspiracy theorist Bill Cooper last week. I mean, with a sufficiently byzantine law code, maybe they’ll find Stone guilty of something, who knows, but as he’s aware (and as the federal government might be too stupid to realize), the authorities can win the short-term legal battle and still lose the longer war for moral credibility.

In the long run, who took the bigger credibility hit in the 1993 fight between the U.S. government and the Branch Davidians? The flattest smoking ruin after that fracas was probably public trust in the ATF.

In the case of the Stone arrest, it once more seems to be the hyper-militarized state that was itching for a fight, not the aging loner—who was unarmed, unlike Bill Cooper when the government killed him shortly after 9/11. And even if you assume everything investigator Mueller, his associates, and his enthusiasts are saying is true, it looks a lot like Stone and some (not all) others swept up in the nearly three-year-old Russia investigation are guilty mainly of “six degrees of separation.”

It looks as though, very roughly speaking (and you cannot reasonably expect me to recount all the elaborate details at this point), Stone heard from a comedian who heard from an interview with Assange that Wikileaks might be receiving Democrat emails from a still unknown leaker, and Stone sometimes talks to the Trump team. That seems like a pretty sketchy target to paint on the President, if that’s the implied end goal here, especially in a political world filled with domestic and international connections at all times.

If Stone seems unfazed by Democrats’ worries that the 2016 election was in some tenuous sense “stolen,” maybe it’s because he’s still steamed about his first boss, Nixon, having his near-election to the presidency in 1960 stolen by dead-voters-backed gangster JFK. You don’t hear too many establishment Democrats who are now hyperventilating about Trump’s election denouncing the whole Kennedy administration as illegitimate. They seem to like Kennedy, in fact, though maybe if the conspiracy theorists convince Democrats that the CIA killed Kennedy, the Democrats will suddenly decide Kennedy must’ve been a bad guy, given how deeply in love with the Deep State the servile Democrats are these days.

Stone, who admits to being a slimy political trickster, strikes me as neither servile nor fascistic by nature but in fact almost unsettlingly mellow, most of the time. I met him briefly at the election night party he threw for Manhattan Madam turned New York gubernatorial candidate Kristin Davis in 2010, and normally he speaks very quietly, unsettlingly so, even if complaining about gratuitously unflattering coverage in the New York Post. Steve Martin, who portrayed him in bellowing fashion on Saturday Night Live this past weekend, doesn’t really get Stone, I think. It’s all about soft-spoken menace, even if he speaks up a bit when he’s radio hosting. I think I could do a better Roger Stone impression than the SNL bit, much as I love Steve Martin, a major early influence.

Forgive the comedic tangent, but for good or ill, it’s getting harder to take all this stuff seriously. As if mirroring the ever-tightening legal screws applied to the Trump faction, another conspiracy theorist(s), the mysterious online entity called QAnon, which spews unverifiably vague and syntactically-scrambled, horoscope-like political predictions and somehow thereby amasses a legion of devoted followers, keeps promising the imminent arrest not of team Trump but of Trump’s detractors and an array of Deep State operatives for unspecified but traitorous crimes. Trump is but biding his time, say the Q fans, until opening numerous “sealed indictments” that will take down all the anti-Trump conspirators simultaneously and send them to Gitmo.

Like the return of Jesus or UFO disclosure, the unsealing of the indictments perpetually retreats into the future while continually growing in significance so that the total number of purported sealed indictments keeps growing, from dozens to hundreds to something like 60,000 the last time I checked the Q-allied conspiracy theorists’ latest claims. Gitmo will be very crowded. Given that many of the Trump-leaning conspiracy theorists are also enthusiasts for border-Wall-building, though, they’d better hope the surprise ending isn’t that Trump has prepared 330 million sealed indictments and that we are all imprisoned here with each other for the rest of our lives.

In the parlance of the conspiracy theorists, that would be a bit like turning the whole of America into one giant FEMA camp. And at least one online conspiracy theorist is now obsessed with the claim that when that agency begins herding us all into camps, it will next break out the guillotines. I know of zero evidence for this wild fear—though I did just see the great play A Man for All Seasons at the Acorn Theatre in Manhattan, a reminder that some principled or just plain stubborn political advisors do end up beheaded. Sometimes a head rolls, and I don’t meant to sound indifferent about it, but I’d like to remind the overexcited that it is very rarely the king’s.