What Happened To The "Female Obama"—Kamala Harris?

The evidence was always right out in the open. 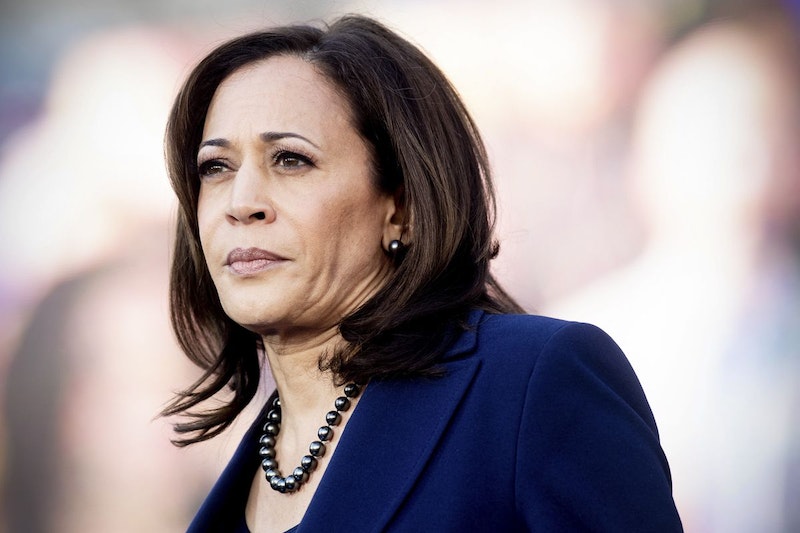 When Sen. Kamala Harris launched her presidential campaign last January in her hometown of Oakland, she drew a bigger crowd than Barack Obama did when he announced his run in Illinois in 2007. The media ran with the story. CNN declared, in a glowing piece of cheerleading that contained only a cursory treatment of any possible weaknesses, "It's Kamala Harris' race now." But just 10 months later, in the back rooms where California strategists, political operatives, and elected officials speak candidly, there's chatter that the former California Attorney General should drop out of the race before being humiliated in her home state's March primary. How could things have gone so wrong?

Instead of capitalizing on her auspicious Oakland debut, Harris turned into the Incredible Shrinking Candidate. Those of us outside of California were told how talented and capable she was, so we looked forward to witnessing it first-hand, but not even Californians are buying that anymore. The candidate's currently polling at single digits in the Golden State, down from 19 percent after she lit into Joe Biden in the June Democratic debate and had a brief uptick of support.

The initial hype over Harris as a candidate included speculation about her being the "female Obama," which made about as much sense as people talking about the next Michael Jordan. She came armed with a combative nature well-suited to taking on a sludge-thrower like Trump, they told us. On paper at least, the Senator seemed a good fit for a party that's much more intersectionality-driven than it was during Obama's time. Not only is Harris female and black, her Indian heritage makes her part Asian. Elizabeth Warren could only dream of embodying the "progressive stack" like that.

But the Democratic base has moved too far left for someone with a prosecutor's background. The meme that's getting around—"Kamala's a cop"—isn't the best message in an era when Democrats are pointing fingers at the culprits responsible for mass incarceration, cash bail, and other criminal justice inequities.

Tulsi Gabbard diagnosed the problem and kneecapped her opponent during the August Democratic debate. "She put over 1,500 people in jail for marijuana violations and laughed about it when asked if she'd ever smoked marijuana," said the Hawaii legislator before criticizing Harris for suppressing evidence that would have freed a man on death row, championing an oppressive cash bail system, and keeping people in prison for their cheap labor. "You owe those people an apology," she said, and Harris was unable to defend herself.

The media cuts her slack on it, but Harris has a laugh (cackle to her detractors) that can be off-putting on the national stage, and you never know what's going to trigger it. Sometimes it's her own joke, like the one she told about Donald Trump resembling the Wizard of Oz during one of the debates. She laughed uncomfortably long after that one. As Gabbard said, she laughed when admitting to smoking marijuana, just like she laughed about locking up the parents of truants. In September, Harris laughed and said, "Well said," to a man who'd described Trump's actions as "mentally retarded." She then apologized, saying that she hadn't heard the man's words.

It's not a Joker laugh, but it's weird and disconcerting. Despite her manifest weaknesses as a candidate, the media often pretends to be baffled by Harris' lack of success. A recent ABC News piece had this to say: "While the root of Harris' struggles to gain traction in polls is unclear, she has had her own difficulties connecting with audiences beyond her core supporters." If someone considered a frontrunner in January is now polling at five percent nationally, how is it possible that the cause of her collapse is "unclear"? Harris, wishing to avoid the harsh reality that she's a bust, has asked whether America's ready for a black female candidate. The answer is "yes," but her name is Michelle Obama.

Harris said she'll be a "prosecutor president," but the Democrats aren't looking for that. Whatever that je ne sais quoi quality is that turns a looks-good-on-paper candidate into a real-life contender, Kamala Harris, despite the early hoopla, has proven she doesn't have it. She'll quit before the California primary comes around if she still wants to be reelected to the US Senate.