Latest Democratic debate so obviously slanted against Bernie Sanders you’d have to be a liar or idiot not to notice. 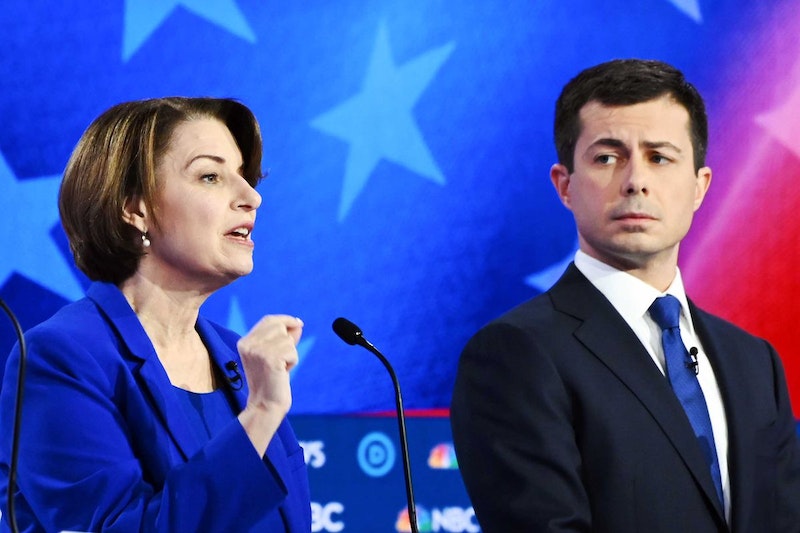 “Miss me?” Yes, Marianne. Please come back. America needs your smoky Transatlantic accented je ne sais quoi more than ever. Beto showed some humility and dropped out, but maybe that was a mistake. Maybe he would’ve been the favored candidate of the moderators at Wednesday night’s MSNBC/Washington Post debate in Atlanta. Inexplicably, Amy Klobuchar and Tom Steyer got more questions and time than the frontrunners. It was an also-rans’ night, and Klobuchar was positively vibrating with excitement. Not even Mayor Pete got a shining moment, despite being the media’s latest obsession. It was a holding pattern debate: without “explosive” impeachment news earlier in the day, it would’ve been a different debate.

The "bipartisan" civility that Buttigieg keeps pushing is really just a pre-Trump world where far fewer people paid attention to politics all the time. Trump is the only reason so many more Americans appear engaged with the news year round. Would the same scrutiny have prevented George W. Bush from invading Iraq under false pretenses? Would Obama have gotten some mainstream criticism for his wildly inaccurate drone strikes that had a 90 percent civilian casualty rate? Maybe not. I also missed Julian Castro Wednesday night, who did a nice job last month defending Sanders and criticizing Buttigieg’s disingenuous pleas for civility. “This is a primary!” Yes it is. And the DNC has no idea what they’re doing, stuck with a sundowning cadaver with bad veneers and half a dozen born-to-lose centrists.

Why so many questions for Klobuchar? I expected the questions to be slanted against Sanders, but Jesus Christ: he gets one chance to speak in the first 45 minutes, and the question comes, “Is Barack Obama wrong [about healthcare]?” He handled it fine, just as he took the even more ridiculous request by Rachel Maddow to denounce “LOCK HIM UP!” chants at Sanders’ rallies, despite the fact that she’s made a career out of documenting in painstaking detail almost every night on her show that Trump is a treasonous criminal. Yang is a benign non-entity to these moderators, and they ignored him with kindness. But Gabbard was the other target, and there’s some legitimate criticism in their loaded questions. Gabbard didn’t just go on Fox News (more Democratic candidates should, millions of people watch it), she was a regular talking head who denounced “radical Islamic terrorism” to the same tune as every other Islamophobic conservative on the network.

I figured, like everyone else, that it would be Buttigieg’s turn to get roasted. No such luck: only a tense exchange between him and Gabbard, where he nearly lost his cool as they got into a nice little piece of veteran-on-veteran violence. But the fix is in on Sanders, who’s getting petty asides in The Washington Post and The New York Times, and the questions made that clear. If you don’t see the obvious attempt at sabotage here, you’re either deluding yourself, lying, or just not paying attention. I’m not a fan of Gabbard, but the way she was treated was equally unfair and blatantly slanted. Even if you don’t like Sanders, do you want a primary where the scales are weighted before you have any say in the matter? It’s as much an affront to democracy as Trump’s Keystone Cops attempt at a quid pro quo.