Factions All the Way Down

For the right, the healing may never begin. 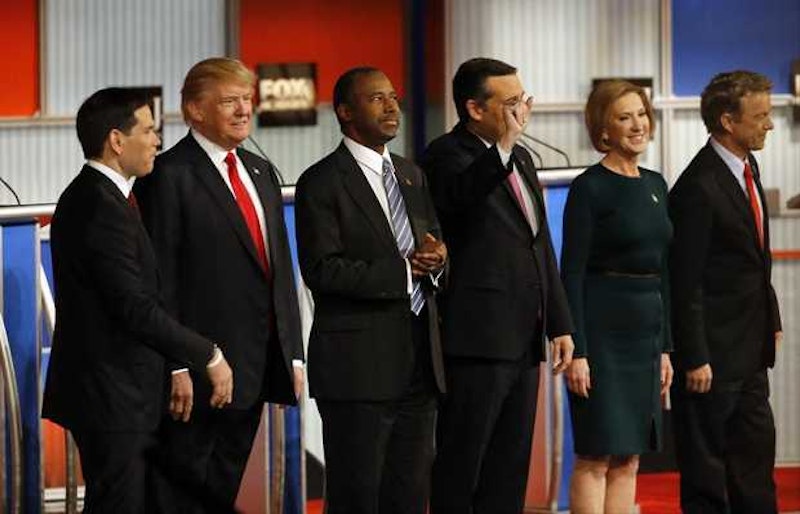 Democrats long thought they had tough coalition-building challenges on their end of the political spectrum and, particularly in the past couple decades, have spoken with awe and fear of the right’s ability to walk in lock-step, like the evil brainless zombie-monsters they were presumed to be.

But if you look at the fragmented polls for the 17 initial Republican presidential candidates, one more thing that must cause pessimism is the fact that you can eliminate 11 of those people and still have a hopelessly divided party. In fact, I predict that’s exactly where we’re headed.

The Democrats’ factions were rarely based on truly irreconcilable principles. They were just a varied bunch of people who sometimes ignored each other and sometimes worked together in big, rainbowy coalitions. Whenever talk of a potential “conservative crack-up” arose, by contrast, there was a recognition that grumpy conservatives had the potential to just declare each other evil and go their separate ways, especially since (unlike Democrats) conservatives really do tend to love their principles more than cobbling together an electoral majority.

If they lose at the polls, by gum, they’ll be vindicated by history. Or by God on Judgment Day. Or in philosophy class. Or in the pages of the more econ-savvy highbrow magazines.

So, even if we narrow our gaze after the Tuesday night Republican candidates’ debate and ignore all the candidates who weren’t eligible for the main stage—which cut the immense field to eight—and then ignore the bottom two of the main-debate candidates, Kasich and Fiorina, we’re still left with a half-dozen candidates who, I contend, will each continue for the rest of the year to work their half-dozen niche markets in the fragmented Republican electorate.

Roughly speaking, Ben Carson gets the religious conservatives, Donald Trump gets the populists, Marco Rubio gets the hawks, Ted Cruz gets the just-plain conservatives, Ron Paul gets the libertarians, and Jeb Bush gets the waning establishment. I’m not even sure that any one of those candidates cares about cobbling the whole mess into one coherent (fusionist, if you will) philosophy, one whole movement larger than its parts.

I mean, they each know that odds are none of them will be president. And each would probably like to keep his core audience around for the subsequent TV deal, think tank post, Senate campaign, mega-church speaking series, what have you—like so many doomed-yet-prospects-possessing Palins and Huckabees.

Paul has plainly put the most strategic effort into winning over different subgroups, and Cruz looks like a fairly typical “consensus conservative” without even trying, but they still might both be too weird to win. And then I’m not sure the Republicans really have a single party after Election Day—nor are there big incentives for serious new parties to form these days, given all the two-party advantages built into the system.

So perhaps a system of temporary, rotating factional dominance will have to be worked out, or just a big wheel with a pointer on it.