What About the Casinos in the Story About Jeb and Trump? 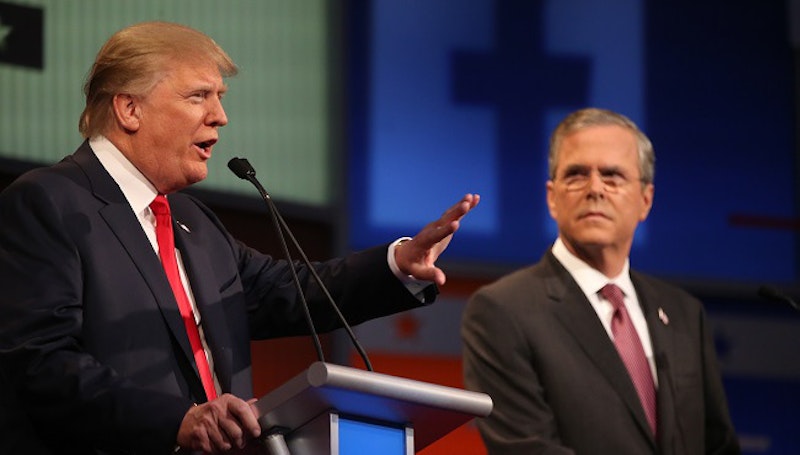 We never find out if Trump got the casino go-ahead. I'm guessing maybe he didn't, but The Washington Post ought to tell us. The paper has a long piece on how Donald Trump and Jeb Bush have dealt with each other over the years, and it includes mention of a fundraiser Trump held for Bush in 1998, when Jeb was running for governor. “It was not merely a political favor,” the Post says. “Trump had been trying to persuade Florida lawmakers to allow his company to manage casinos on tribal land.” If he backed Jeb, and Jeb did not come through, you can see why Trump would especially want to kick him. But the Post doesn't say.

We do learn that Trump buttered up Gov. Jeb in a fervent way. From his 2000 book The America We Deserve (which should be the slogan on his hats), here is Trump on Jeb: “[E]xactly the kind of political leader this country needs now and will very much need in the future... I believe we could get another president from the Bushes.” We also learn that much later, Trump was bad-mouthing the ex-governor on the golf course. In January 2014, Trump went golfing with some well-placed Florida lawmakers, all Republicans. “He was trashing Jeb and, quite honestly, I don’t think he’s ever held Jeb in high regard,” one of them says. “I’ve met with Mr. Trump on several occasions and he’s constantly had things to say about Jeb... He’s always had a negative connotation about Jeb.” Now Trump and Jeb are both candidates, and Trump is out to get him. A “Trump associate” says the Man has two goals: “One, to be elected president, and two, to have Jeb not be president.” Sounds like a grudge. Or maybe this is what Trump does when he sees a competitor.

The casino information—go-ahead, red light?—would’ve been nice to have. One looks for any toehold when making sense of these people. Of course, if Trump felt Jeb had let him down, wouldn't he have told us by now? The article leans toward the theory that the Bushes snubbed Trump at some point. The idea isn't fleshed out or argued for, just slipped in there: “Asked why the Bushes often have kept Trump at arm’s length, he said: 'He’s not from old, WASP money. The Trumps didn’t come on the Mayflower.'” Note the phrasing of the lead-in.

The “he” is Roger Stone, ex-GOP operative and frequent friend of Donald Trump. You can take his word or not, but Stone accepts the premise that Trump got snubbed. I'll add that, allegedly, the Bushes never let Lee Atwater into the mansion at Kennebunkport; he had to stand in the driveway. But the best evidence for the snub theory comes from Trump. “I’ve never tried to click,” he says to the Post. “If I devoted time to being friendly with them, don’t you think I’d be friendly with them?” Let the question hang there.

Brass tacks. The article is hopped up on the saga it's going to tell: “Since the gilded 1980s, when Trump and George H.W. Bush rose as forces in their respective spheres,” etc. The facts, when laid out, amount to this. Trump has voiced opinions about the first and second Bush presidencies, the same opinions a lot of people have voiced (the first Bush shouldn't have raised taxes, the second Bush was a flop and a moron). And Trump has sucked up to Jeb in print. And he held a Bush fund-raiser when George H.W. Bush looked like a good shot for president, and another when Jeb was a good shot for running Florida. And he says nasty things about Jeb in the presence of the speaker of the Florida House of Representatives. And Roger Stone accepts the premise that the Bushes didn't want Donald's company.

A page at Wikipedia, “List of Casinos in Florida,” shows us no casino with “Trump” in its name. So now we know that too. Maybe he never got the go-ahead. I wish the Post would let us know—it seems relevant.