Ohio Republicans miss a chance to show some class. 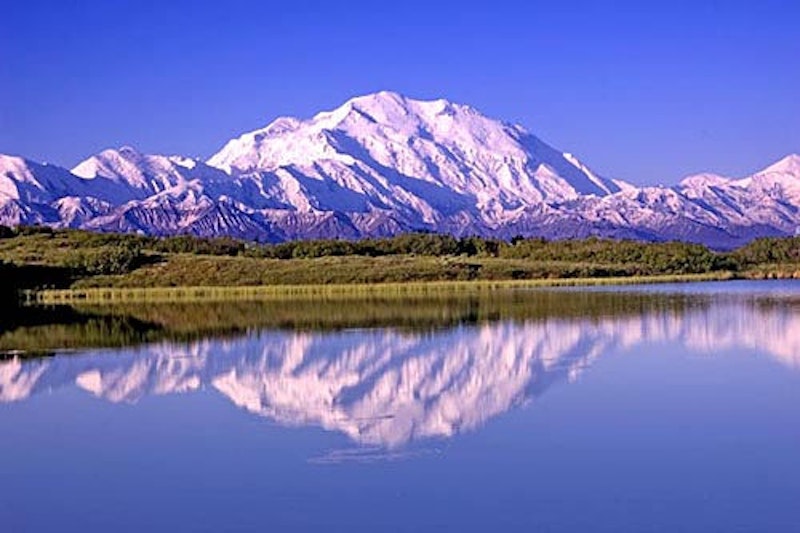 President Obama restored North America's highest mountain to its original name, Denali, this week, sparking predictable outrage (mostly for show) in some Republican circles, especially those in Ohio. The hand-wringing was for the 25th president, Ohioan William McKinley, who had somehow managed to get his name affixed to the imposing mountain without ever once setting foot in Alaska.

House Speaker John Boehner was able to hold back crocodile tears, allowing that he was "deeply disappointed," while Ohio Gov. John Kasich tweeted that the President "once again oversteps his bounds." Republican Rep. Bob Gibbs turned up the rhetoric, saying in an all-caps statement released on Sunday night that President Barack Obama's decision to revert Mt. McKinley's name to its original Alaska native name was "insulting to all Ohioans." Gibbs also claimed that this "political stunt" was part of Obama's effort "TO PROMOTE HIS JOB-KILLING WAR ON ENERGY," presumably unaware that, in July, the President green-lighted Shell to drill in the Chukchi Sea, about 70 miles off Alaska’s Arctic coast.

Gibbs, while defending the wounded honor of his fellow Ohioans, oddly neglected to mention the Alaskan people, to whom this natural wonder means so much. Normally his crowd is all for states' rights—certainly when it comes to voting restrictions, abortion laws, and marriage rights—but in ultra-crucial matters of national interest such as this one, the name of a mountain in a faraway state, they make an exception.

Sen. Lisa Murkowski doesn’t share the sentiments of her fellow Republicans in Ohio. In fact, she praised Obama in a statement and video posted online. "Denali" is what Alaskans call the mountain, and it's what people who climb the mountain have always called it. People talking about climbing "Mt. McKinley" happens about as much as people saying, "Let's go out for English food tonight."

The federal government officially dubbed the mountain "Mount McKinley" back in 1917, to honor the former president, who’d been assassinated in 1901. Alaska has been petitioning Congress for decades to restore the name "Denali," but Ohio politicians have maneuvered successfully, until now, to block them.

Maybe I'm being too cynical, but perhaps the anti-Denali contingent has a deeper motive to cling to the "McKinley" name. The Tea Party has pushed the GOP farther to the right than they've been since McKinley's time, so could they be feeling a nostalgic longing for the halcyon years of the late 19th century, the Gilded Age? After all, the 20th century has been a rough one under the prevailing Republican mindset.

Under McKinley, robber barons reigned, openly hiring the Pinkertons to do their dirty work (i.e. crack skulls) for them. Lincoln's "radical" Homestead Act was dismantled by big banks and railroad trusts. These were the golden years when businesses could actually thrive, unfettered by consumer safety concerns, civil rights legislation, a progressive tax system, labor laws, a minimum wage, or any of that government overreach. It's not hard to see how many of today's Republicans would moon over such idyllic times.

I'm not saying this is just a Republican thing when politicians manufacture outrage over non-issues that they refuse to talk about in their entire context, but in this case it is a Republican thing. This is one reason why people are cynical about hypocritical politicians.

I have a suggestion. Bob Gibbs could have released the following statement, sans caps of course: "It has been an honor that our nation's highest mountain has, for the past 98 years, been named after President William McKinley, one of Ohio's finest, who gave his life in service of his nation. We deeply appreciate Alaska's paying its respects to a great President for nearly a century, but we are happy at this time to allow the people of Alaska to decide what to name their own great natural wonder, in accordance with our deep and abiding respect for the concept of states' rights."

As a final step, Ohioans can rename their highest mountain, the 1,550-foot Campbell Hill, "Mt. McKinley." Denali, 20,000 feet tall, is way too majestic for McKinley anyway. I'd say Campbell Hill suits him just fine, with the added benefit that it's in Ohio.