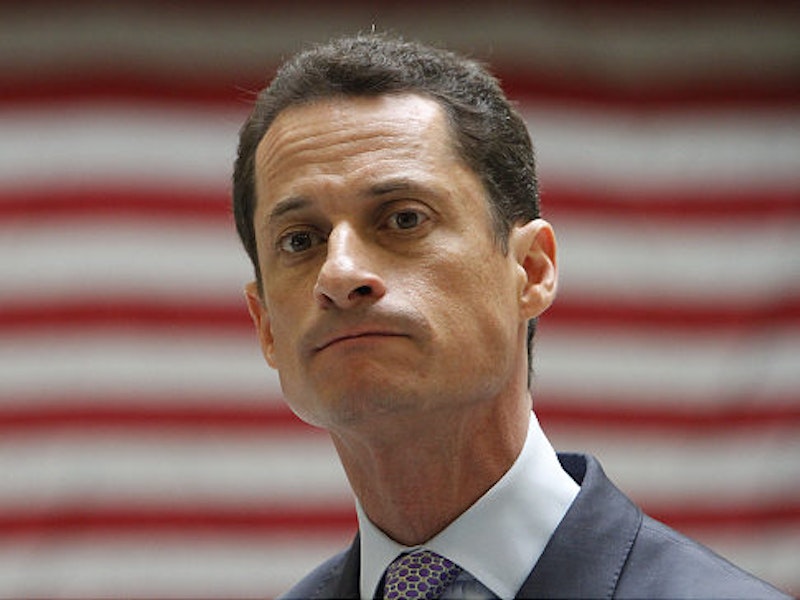 It was all in the name.

It’s the only explanation for the end of Anthony Weiner’s Congressional career. After all, he is a Democrat. Democrats get away things; even being serviced by an intern under your office desk, lying about it under oath, and coaching others to lie about it. For Democrats, doing such things is akin to “defending the constitution”—it’s practically Tea Party work! Heck, as Democrats, having sex with an underage page isn’t necessarily a bar to re-election (so long as it’s same-sex).

Convincing rape allegations from a tearful former supporter? Don’t worry about it! Your boyfriend is running a brothel out of your house and you’ve abused your authority to get rid of his parking tickets? Good for you! You have a habit of forcing yourself on women and occasionally raping them with the convenient help of a drug-laced cocktail? It’s a potential problem, but only if more than one complains! You’ve left a woman submerged underwater in your car after a drunken night of carousing? Give that man a waitress sandwich!

The lists of scandals go on and on, but let’s face it: Republicans can lose their seats for waving hello in a men’s room, while as a general rule, Democrats can keep their seats under all kinds of scandals. And before you shout “Vitter!” know that he’s just the exception that proves the rule. So why was Weiner forced to surrender his seat? After all, it’s not like he was a Treasury Secretary who didn’t pay taxes or something.

Obvious answer: the name. Unless there’s a politician out there named Harry McSchlongshower, Weiner could not have a worse name for a scandal of this kind. Even Congressman Norm Dicks of Washington State would’ve been better off—Weiner is funnier than Dicks, and Weiner puns have a nice PG-13 sound to them for TV and radio shows.

His name’s Weiner and he’s sending self-portraits of his namesake in hilarious poses! How was the media supposed to resist a story? As long as Weiner was in the news, Democrats couldn’t focus on their agenda—which is really just another more painful and less picturesque way of sending Americans what Weiner sent to Facebook friends: The shaft.

Weiner could have convincingly argued that he was the last honest Democrat in Congress—he’s actually sending pictures of what he’s looking forward to doing to you instead of trying to convince you he’s there to help.

Why would he do such a thing? Who knows? He’s among the smartest men in the political world—along with Eliot Spitzer and Barney Frank. We know this because all the really smart guys in TV and print keep telling us so. And speaking of Spitzer, who paid the price for his participation in the illegal sex trade by landing a hosting job with CNN, now that Kathleen Parker gone from CNN’s Parker/Spitzer show, perhaps the media-savvy Weiner could take Parker’s place. Weiner/Spitzer has an appropriate ring to it. After seeing the poses Weiner sent out, my guess is he’d want to share the limelight and make the show a threesome with John King, making it King/Weiner/Spitzer. No doubt John King would request a transfer to Fox.

With the brilliant Weiner finally pulling out, perhaps now the media can renew its fascination with Sarah Palin who just had 25,000 pages of emails scoured and, to my knowledge, didn’t get caught sending a single constituent an X-rated photo. She’s too dumb for that.

As this story shrivels in the aftermath, the mystery of the Weiner women may never be solved. Weiner sent crotch-portraits out to an array of women, none of whom seemed all that interested to see them. Yet these women showed a remarkable tolerance for the creepy by continuing their contact with Weiner. Is Weiner’s conversational style not as unusual as those of us outside far-left political circles would expect? We may never know. We may never want to know.

Ultimately, the stress and pressure was too much for Weiner and he collapsed like, well, you know. Weiner could not function and, after freeing his staff figuratively and literally, resigned his post, freeing himself to find a cure for his disease. He’s now like a political Bruce Banner, always searching for a cure for The Incredible Bulk. Only instead of not liking him when he’s angry, you also won’t like him when he’s happy.

Weiner’s off to heal with his family, which is good, because he not only has a wife to consider but a little Weiner on the way. I imagine family and friends will be a little nervous the first time he tries to show baby pictures.

“Would you like to see the little Weiner?” he’ll ask.

“No thanks, I’ve already seen enough of it,” they’ll say.

No doubt Weiner hopes to rise again.  If he does, he might consider a name change.

—David Boze is a talk radio host in Seattle and can be found at davidboze.com