The New York Times frequently buries important articles on issues like climate change, immigration and Palestinians in its back pages. 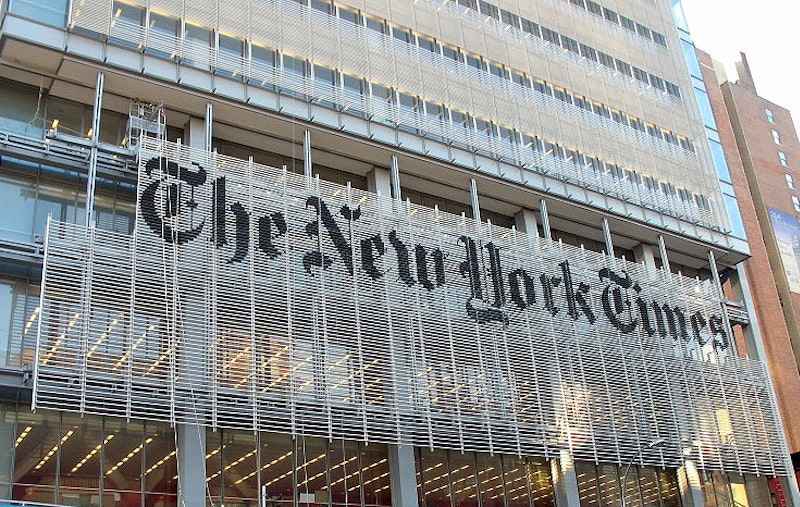 Before I lost faith in the integrity of The New York Times, I used to read the articles the paper wanted me to read—the front page, editorials and those singled out in the blurbs at the bottom of the front page and the “Inside The Times” section. However, one time I stumbled upon an article buried in the back about how the Supreme Court dismissed a case brought against the Bush administration in which the plaintiffs were removed from a speech President Bush gave about Social Security in 2005 because they held up a “no more blood for oil” sign, even though they did not protest or disrupt the event. This struck me as extremely important. I wondered why it didn’t make the front page or get any attention for that matter.

Around this time I was reading Jane Mayer’s The Dark Side: the Inside Story About how the War on Terror Turned into a War on American Ideals, and she reports that the Times knew about torture early on but chose to bury the scandal in the back pages, fearing backlash from the Bush administration. I nevertheless continued to trust the Times until I learned from dissident critiques of mass media such as Noam Chomsky’s Manufacturing Consent that, as a huge corporation itself, it merely serves corporate and state power. Accordingly, whenever I read the Times I now make sure to check which articles are dumped in the back. The last week and a half’s worth of coverage offers a stunning case in point about media bias in the service of power.

On June 10, the front page featured reports about Anthony Weiner’s sex life, a new A.T.M. machine in Russia and how in India the free market is being impeded from spreading prosperity by the government. On page A-17 appeared a one-paragraph article  about how Alabama passed an immigration bill that is even more draconian than the Arizona measure that generated much controversy last summer. In addition to all the flagrantly racist and unconstitutional measures sought by Arizona, Alabama’s law “requires public schools to determine the immigration status of all students starting in kindergarten and makes it a crime to knowingly give a ride in a vehicle to an illegal immigrant.” Certainly, such a disgraceful piece of legislation deserves more coverage than one measly paragraph. Why did the Arizona bill generate more notoriety? The answer is unclear to me, though I suspect fierce protests, rather than the measure itself, forced the media to pay attention.

The Times’ neglect of immigration issues manifested itself in ugly fashion once more on June 15. The front page featured an article pointing to a Human Rights Watch report on a lead poisoning epidemic plaguing China that the government failed to adequately address. That day there was another Human Rights Watch report. On page A-20, receiving no mention anywhere else in the paper, there was a piece about how HRW found that in America nearly half of all immigrant detainees being held in custody while their cases move through the courts have been shipped around the country from prison to prison and stripped of basic rights, such as access to lawyers and family. This has affected hundreds of thousands of people, from permanent residents to undocumented persons. The article was tamely titled, “Transfers Delay Release of Detainees, Report Finds.” The actual report is far harsher. This illustrates how corporate media is quick to highlight the moral bankruptcy of enemy governments, but not our own.

But at least in that case the Times reported the basic facts. In the same edition on page A-12 appeared a small piece that merited no mention elsewhere about a recent U.N. report concluding that the unemployment rate in Gaza is over 45 percent. The coverage is as Orwellian as what you’d expect to see on Fox News. The headline states that the “high jobless rates in Gaza” continue, “despite Israel’s easing of blockade,” as if Israel were working to improve living conditions for the Palestinians. The author blames Hamas for the misery because “one of the goals of Israel’s economic embargo on Gaza, which began four years ago, was to weaken Hamas and its grip on Gaza,” which was attained by “Hamas’s violent ouster of Fatah from Gaza in 2007.” There are no quotes from Palestinians—the victims of Israel’s siege, which is an act of war—and no mention that after Hamas won a legitimate democratic election Israel punished Gaza by launching missiles into densely populated refugee camps, slaughtering hundreds of civilians, bulldozed neighborhoods, and cut off electricity, water, food supplies and access to medicine. The article ends with a paragraph about Israeli officials disputing the accuracy of the U.N. report, which “seemed intended to paint as bleak a picture as possible.”

The next day the Times continued its perverse prioritization and misinformation by burying a piece about severe weather and global warming on page A-23. The headline reads, “Scientists See More Deadly Weather, but Dispute the Cause.” The article discusses a new report by the National Oceanic and Atmospheric Administration on extreme weather in 2011. It claims that the scientists involved “were careful not to blame humans for this year’s rash of deadly events” and then goes on to quote Thomas R. Karl, co-author of the report, as saying that the last two decades are similar to “the early part of the 20th century,” when “there was also a tendency for more extreme events followed by a quiet couple of decades,” adding further that “it is difficult and unlikely to discern a human fingerprint, if there is one, on the drought record of the United States.”

The Times purports that these quotes were made while “presenting” the NOAA report, without specifying where and to whom the presentation was given. I have been unable to find this presentation. I have been able to locate the report, however, which states unambiguously that in addition to the La Nina effect, the extreme weather came about because ahead of these storm systems, warm southerly flow brought much-above-average temperatures and moisture from the Gulf of Mexico, where sea surface temperatures were about 1.0 °C (1.8 °F) above average. The above-average sea surface temperatures in the Gulf of Mexico contributed to above-average water vapor content in the atmosphere, increasing the amount of energy available for severe weather outbreaks. North of the temperature boundary, along the Ohio Valley, record precipitation fell, and to the southwest much-below-normal precipitation was observed. For the month of April, record statewide precipitation amounts fell in Indiana, Illinois, Kentucky, Ohio, Pennsylvania, and West Virginia, while much-below-normal precipitation was observed across Texas.

The report further nullifies the Times’ claim that weather patterns resemble those seen at the beginning of the 20th century by asserting that “Tornadoes, flooding, drought, and wildfires ravaged many parts of the country during the period [Spring 2011], and each of these extremes broke long-standing records and have been compared to the 'worst such cases' in history. While similar extremes have occurred throughout modern American history, never before have they occurred in a single month.” The Times’ coverage of climate change and extreme weather is particularly disturbing because, aside from the fact that this issue merits front page status, since civilization is literally being destroyed by global warming, the only reporting we do get to see, for those who take the time to search through the entire paper, is hopelessly distorted. Furthermore, it serves as fodder for climate change denial websites which point to this article as evidence that even the “liberal” New York Times concedes “there's no evidence that global warming is caused by man.” The fact that the Times passes as liberal in America, much like with Barack Obama, illustrates how thoroughly corporate-backed right-wing flak machines have hijacked the political debate.

What makes the Times’ systematic adherence to corporate/state propaganda so dangerous is that it is probably the most important and influential newspaper in America and the world, with a reputation for questioning authority and defending free speech. It is also arguably the best media outlet in the mainstream, featuring extraordinary writing and occasionally excellent reporting. Since this is the best we can hope to get from the corporate media, it is crucial that we look elsewhere for information about the plight of American immigrants, Palestinians and the climate, to name a few examples.

—Marc Adler can also be found at thebloodycrossroads.com