Mohammed, a New York City cab driver, shares his all too common plight. 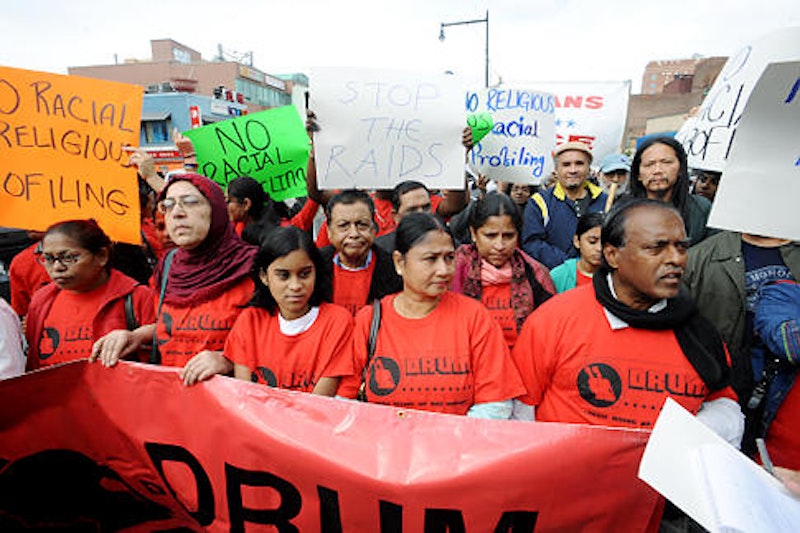 Muslims and Desis protest against racial profiling in New York.

“Before September 11 this was a great country, 100 percent beautiful, and I was treated just like anybody else. After September 11 we have a hard time because of the names.” These are the words of Mohammed, a cab driver in New York who requested anonymity out of fear of the police and government. He grew up in Jordan, where his family moved after they were expelled from Palestine in 1948. He moved to the States 35 years ago, returned to his home country only once to get married, and has two daughters, a nurse and an English teacher.

Mohammed wears a blue cap that says “New York City” and looks very tense as we sit down for coffee. His body language conveys sharp anxiety as he describes to me the injustice he has suffered during the last decade. A couple of years ago he received a traffic ticket for allegedly failing to record someone in his passenger’s log. Instead of being allowed to fight the ticket in a conventional setting, he was forced to attend a criminal court hearing. “When the judge saw my name it was all over,” he explains. “That’s how it is.”

The cop who wrote his ticket did not show up. Instead a colleague bore testimony. The false witness could not even get the manufactured story straight, claiming that Mohammed failed to record a male passenger when in fact the passenger in question was a woman. The judge obviously understood the full context of the case before him because after Mohammed contradicted the cop’s lie the judge asked the officer to clarify whether the passenger was a man or woman. The cop said he did not know. At this point the judge issued his ruling: not only did he find Mohammed guilty, but he compelled him to pay three tickets’ worth of fines, totaling $750. Because there were other people in the room waiting for their hearings the judge immediately stepped outside until Mohamed left to ensure there was no protesting this vicious injustice. When Mohammed exited the building the other police officers present at the hearing laughed at him, taunting him for being Muslim.

It gets worse. Two weeks ago Mohammed was driving when a cop who appeared to be drunk pulled him over and handed him a ticket for “unsafe passing” (I saw a copy of the ticket). Mohammed handed over his license and registration and protested that he had not violated the law. In response to this the officer wrote up three more tickets for offenses such as “failure to signal” and “obstructing view.” I ask what the latter meant. “You see this?”  Mohammed asks, handing me a car freshener that said St. John’s Riverside Hospital: “My daughter is a nurse and treats cancer patients at the hospital so they gave her this to put in my car… The cop didn’t even look at what it is.”

Mohammed tells me that these incidents are routine. Someone he knows once got arrested because a cop saw him take out a plastic knife in his car. A friend of his received criminal convictions for phony traffic violations and decided to sleep on the streets for a few nights because he feared the police were spying on him and following him whenever he went to work in the morning. Mohammed is careful to avoid even remotely suspicious behavior.

He adds that he recently donated blood at his daughter’s hospital: “What kind of country is this? I give my blood and they treat me like this? Why? It’s not fair… It’s almost like I’m in Jordan,” clarifying that it’s slightly better here because he has access to health care. “I love this country,” he explains, “I don’t blame them for what they’re doing after September 11, but they should not do so much; at least look at the record, don’t judge before you look at the case, treat us like everyone else.” Before he leaves he stresses that, “All this is from the media, nothing else.  People just hear from the news that we’re bad.”

Mohammed’s story illustrates what the future may hold in store for all Americans. We are living in a creeping police state, where habeas corpus no longer exists, the government has authority to spy on anyone with impunity, and the President can unilaterally declare war on any country he likes and kill or lock up any American citizen he deems a terrorist. This began with Bush but it has arguably gotten worse with Obama, who has already prosecuted more government whistle blowers than all previous presidents combined. The Supreme Court recently ruled in favor of police officers who broke into someone’s home without a warrant because they smelled marijuana and accused the suspect of burning evidence. And the FBI has just carved out new spying privileges for itself.

We should all be concerned about the plight of American Muslims out of simple compassion. But we should also fear for ourselves. America did not become a free society by accident. It happened because people fought for justice. Basic liberties have been abolished, and the state now has legal power to do what it likes to those it deems an enemy. Power unchecked will always be abused. Muslims understand this. Illegal immigrants understand this. What frightens me more about the next terrorist attack is not the attack itself as much as the measures the government will take in reaction. There is good reason to believe that we will all be treated like Muslims in its aftermath. Those who remain silent while the state collectively punishes the Islamic community will have nobody to speak on their behalf when it’s too late.