Hamlet on the Rio Grande: The GOP Waits For Rick Perry

Republican fundraisers and consultants are eager to find out whether Texas Gov. Rick Perry is a summer comet or a real candidate to challenge President Obama. 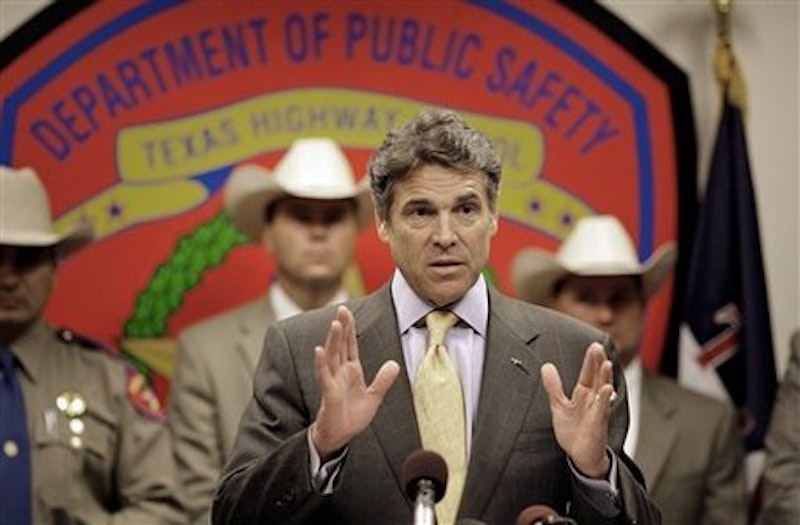 In fact, the author was not a man or woman seeking the GOP presidential nomination—it’s The Wall Street Journal’s Peggy Noonan—but expect similar sentiments expressed by candidates from now until next year’s election. Noonan didn’t mention Rick Perry in her June 18 op-ed—which was a bit odd since it was Perry Week at the Journal—but there’s no Republican aspirant who could deliver those words of fiscal warning more forcefully better than the three-term Texas governor, who is contemplating announcing a run several weeks from now.

Right now, as already-in candidates like Tim Pawlenty and Mitt Romney (the two most serious of the gaggle) are drawing lukewarm interest, Perry is the It Guy of the GOP. Since the end of May, national Republican fundraisers, consultants and would-be kingmakers are fairly drooling at the prospect of Perry joining the fray, such as it is, of White House aspirants. Like the vast majority of career pols, Perry isn’t shy, and so he’s lapping up the attention, and last week made the requisite pilgrimage to the Journal’s editorial offices, and emerged with a number of bullish reports. The editorialists and columnists focused on Texas’ remarkable—in this economic climate—record of job creation and tort reform, while mostly skipping over Perry’s less appealing (to me, at least) coziness with the Christian Right, social positions that make a small-government Libertarian lose his or her lunch, and his wacky evangelical “Response” event planned for August.

Which makes sense: the Journal has traditionally placed economics and the expansion of free enterprise and robust markets above contentious matters of morality. And the economic numbers in Texas on Perry’s watch are eye-popping, accentuated in these past three weeks of double-dip recession fear and a President who appears utterly flummoxed when speaking about how exactly his administration is going to lower unemployment and make Americans more optimistic about the nation’s short- and long-term economic health. Since June of 2009, according to Richard Fisher, president of the Federal Reserve Bank of Dallas, Texas has added 266,300 jobs; the nation as a whole has added 722,000. In a June 10 editorial, a Journal writer says: “Texas has no state income tax. Its regulatory conditions are contained and flexible. It is fiscally responsible and government is small. Its right-to-work law doesn’t impose unions on businesses or employees. It is open to global trade and competition.”

It’s said that the electorate won’t pull the lever for another governor from Texas: I say that’s baloney since the memory of President Bush pales in comparison to an empty checking account. Another common thread of criticism is that Perry is extremely unpopular with conservatives in his own state, which could be true, as Real Clear Politics’ Tom Bevan describes in a June 4 article about Perry’s legislation in 2007 that required all sixth-grade girls to be given the vaccine Gardasil, which prevents HPV, the most commonly transmitted sexual disease in the U.S. That liberal, nanny-state law was praised, Bevan wrote, by The New York Times, which can be the kiss of political death for a conservative. Still, though the Gardasil issue rankled Texans, it didn’t prevent Perry from a convincing reelection run last November. It’s certain that other GOP candidates, preparing for a possible Perry entrance, are readying ads about the controversial measure, and the national media, once it’s done propping up Perry (out of boredom), will hop on the Gardasil bandwagon as well.

Ed Kilgore, writing for The New Republic’s website on June 17, “Rick Perry: Why He’s Not the Man to Save the GOP,” expanded on conservative distrust of Perry in Texas, belittled the state’s job creation and cited his Tea Party cred as reasons why the current hype is overblown. Still, his concluding paragraph signaled liberal fear about an Obama/Perry election.

He writes: “Some [Texas conservatives] appear to be stunned at the very idea [of a presidential campaign], treating him as a sort of Chauncey Gardiner figure who has stumbled, through remarkable luck, into the national spotlight. But Perry’s ultimate stroke of luck could be in appearing on the scene at a time when the Republican Party considers the power of its ideology, not the brains or the accomplishments of its leaders, its trump card in 2012.” Sounds like Kilgore’s already making excuses for an Obama defeat.

Last Saturday, Perry pleased a crowd at the Republican Leadership Conference in New Orleans, saying, "It saddens me when sometimes my fellow Republicans duck and cover in the face of pressure from the left… Our party cannot be all things to all people."

I know several conservatives in Texas and they’re not nuts over Perry, but realistically, faced with the choice of Obama or Perry, does anyone believe that the electoral vote-rich state is going to fall to the Democrat? And nationally, as the Journal’s Dan Henninger wrote last Thursday, Perry’s Texan “swagger” isn’t necessarily a natural fit with the independent voters who decide presidential elections, but if the unemployment rate remains stuck around nine percent, Americans can overlook a lot of flaws that would disqualify a candidate in a happier economic climate.

Henninger noted in his column that Perry’s accent is nothing like Bush’s, and that when the Governor spoke softly at a recent New York appearance, “it had the whiff of that comfy Jimmy Stewart drawl in his cowboys movies.” Make of that what you will, but one of Barack Obama’s compelling traits during the ’08 campaign was the cool and confident demeanor that sounded like a combination of Ali and JFK. Given the right circumstances, I wouldn’t be surprised if the nation would cotton to a Jimmy Stewart type of candidate.