Let's Get Over Ourselves

So I called him a dick. So what? 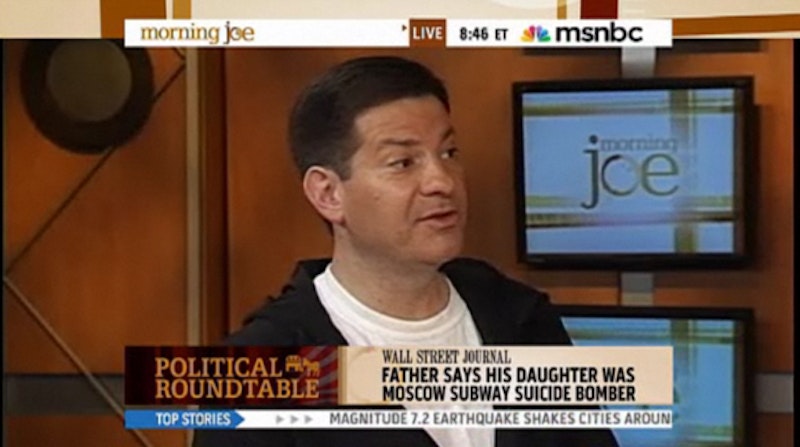 When I woke up today to the sound of 10 minutes of profuse and heartfelt and sincere (so sincere) apologies on MSNBC’s Morning Joe, I thought someone had called President Obama a nigger or something. Turns out all Time editor-at-large Mark Halperin did was call him “a dick.” So what?  Since when is that an offense that warrants an indefinite suspension? Aren’t these the same pundits who used the term “teabaggers”? The idea that “dick” is “above our discourse” is simply absurd; what Halperin said is not exactly a rare sentiment. We call each other dicks all the time and everyone knows it, yet a lot of people are reacting to this as if Halperin called for Barry’s lynching. What adult has never called someone a dick? How can an expression be so offensive when it’s as common as “Have a good one?”

The idea that the public and the media are “above this” is preposterous. Our culture is big, loud, and dumb. MSNBC and Morning Joe aren’t morally superior to anyone else (despite what those “LEAN FORWARD” ads tell you), and to feign disgust simply to hold that high moral ground is contemptible. This is what gets me about the perpetual war between MSNBC and Fox: the former may be slightly more sensible, but they’re equally deluded. Obama was full of shit yesterday: he dissed the Republicans for skipping town when he takes his own vacations and holidays all the time, and didn’t specify at all what he and his party planned to do about the debt crisis and the GOP’s recalcitrance. Obama can’t toe the middle forever and expect to get anything done with a Republican party that’s a far smarter political machine than the Democrats. He could use a little of Mark Halperin’s refreshing candor.

I liked Halperin’s comment because it was honest and straightforward, the precise opposite of typically vague and wishy-washy pundit speak. People don’t talk like pundits, and the lack of candor in the discourse is to blame for the profound and crushing apathy with our political system so prevalent in our country. It’s offensive to me that Joe Scarborough and MSNBC are willing to throw a colleague under the bus for a comment that made a whole lot more sense to a lot of people than most of the bullshit talking points spewed by party robots all day. And as for the won’t somebody please think of the children? argument, I think it’s fair to say that pharmaceutical ads are far more disturbing and traumatizing for young minds than a dirty-ish word they’ve probably heard dozens of times before on the same TV. “If you have thoughts of suicide…” “If you have an erection lasting more than four days…” “Feeling dry down there? Use Vagisil.” How stupid do they think kids are? They are not goldfish. Kids are a lot smarter and more sensible than most adults give them credit for.

There’s something seriously wrong with our culture if we feel the compulsion to so forcibly apologize for discretions that should never even be regarded as such. MSNBC is living the hypocrisy and disingenuousness that they so often skewer Fox and the GOP for right now, and this incident is just further proof of the media’s childish guilt complex. And don’t tell me there isn’t a shard of white guilt in here: if Halperin called George W. Bush a dick, would we have been subjected to a prolonged and condescending stentorian series of apologies from the panel? Get real. Obama doesn’t deserve special treatment because he’s the first black president and he talks nice. He hasn’t been working and fighting hard enough against the Republicans, who are more than willing to play the game and take advantage of his mediator personality. The press conference was nothing but snipes—no substance, no plan, no reassurance that he’ll be spending his time in the West Wing rather than Hawaii or Martha’s Vineyard. Mark Halperin called the President a dick and God bless him for it.