The US's entrenched culture of bailbondsmen is an embarrassment to our justice system. 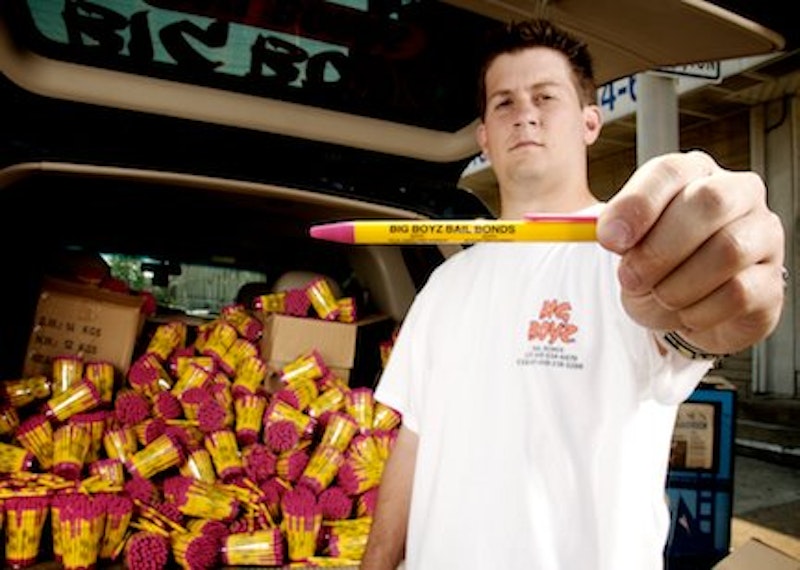 Most Baltimoreans can’t identify even half of Maryland’s state symbols (there are 23, and they range from the skipjack oyster-dredger to the calico cat). But one object has become conspicuously—and unofficially—emblematic of Baltimore: the Big Boyz Bail Bonds pen. That literally millions of these pens have been loosed upon the city signifies more than one company’s promotional prowess—it also suggests that Baltimore, with its high crime-rate and economically depressed populace, offers a thriving market for bail agents. But does a thriving market indicate a genuine need for the bail business, or does it merely betray society’s failure to adopt a better system?

Just as the Big Boyz pen is a Baltimore staple, so too is the bail industry an American staple.  Excepting the Philippines, no other country allows the bail bond business to operate as it does in the United States; such practices are equated with corruption and universally scorned, even in places with highly dysfunctional judicial systems. The industry’s critics, many of whom compose the backbone of America’s own legal system (such as the National District Attorneys Association and the American Bar Association), frequently point to the unseemly intrusion of private business into a system that—by virtue of the values it is sworn to uphold—should remain wholly public. A primary concern is that allowing private businesses to make determinations of freedom subordinates justice to the free market, inevitably resulting in economic discrimination.

Descended from English common law, the bail bonds system exists solely to ensure that defendants appear in court. Defendants who wish to go free during the pretrial phase must pay a deposit; failure to appear in court results in the forfeiture of that deposit. When defendants cannot afford to post bail, they may solicit the services of bail agents in exchange for a nonrefundable fee (usually about 10 percent of the bail), thus shifting the financial obligation associated with their court attendance to a for-profit entity. If a defendant skips his court date, the bond agent is left to foot the bill until he can recover his missing client. This is when the industry’s most colorful characters—the bounty hunters—burst onto the scene, often flouting those elements of the Constitution that protect citizens against kidnapping and unreasonable searches and seizures.

Taken in its entirety, the business is as nuanced as it is brusque. Like any private lenders, bail agents take calculated risks when determining whether to underwrite a bond; they often conduct background checks to determine whether a prospective client is likely to flee after bail has been posted; sometimes they take out mortgages on their clients’ homes as collateral (as one bondsman told the New York Times, “In this business, you have to understand real estate.”); they even scour the world in pursuit of high-value clients who have left them in the lurch. When you consider the complexities inherent to sleuthing, risk analysis, surety agreements, and the real estate market, the business of underwriting bonds can be as sophisticated as anything else. But perhaps the most difficult part of a bail agent’s job is justifying the true necessity of his profession.

Though bondsmen often claim that the American criminal justice system—with its many quirks and idiosyncrasies—has created a need for the bail industry, several states have proven able function without it. Commercial bail bonding no longer exists in Kentucky, Illinois, Wisconsin and Oregon. Many other localities have undercut bondsmen by permitting defendants to pay the court the 10 percent fee normally paid to bondsmen. Unlike the bond agents, who profit specifically by keeping the fee, the courts refund defendants who don’t violate the terms of their bail. Another alternative to bail agents and bounty hunters—though largely unexplored as of yet—is a pretrial release program that uses ankle monitors to track defendants’ whereabouts. These technological “tethers” have already proved effective in monitoring people under house arrest and could be used to dissuade defendants from evading the justice system.

The abundance of better alternatives to the current bond system invites us to ask why we tolerate a practice that subordinates justice to the free market? Why do we allow private businesses to make determinations of freedom? Why do we allow bounty hunters to operate in the shadows of legality? Why hasn’t the public demanded more of its lawmakers?

One explanation is that the average law-abiding citizen couldn’t care less about the mechanics of a system in which he is seldom involved. Bail bondsman argue that the informed taxpayer actually has an interest in maintaining the status quo, since it costs nothing to allow private business to provide a free public service (bondsmen like to portray themselves as public servants, claiming that they save taxpayers the burden of financing a system that ensures that defendants don’t outrun the law). However, most bondsmen fail to mention the billions taxpayers shell out to clothe, house, and feed non-violent offenders who languish in prison because they are too poor to post bail or hire a bondsman.

Another reason the industry prevails over more egalitarian alternatives is that legislators are loath to offend a powerful bail lobby. Bail lobbyists have specifically targeted pretrial release programs that would decrease the number of inmates in America’s overcrowded jails. These cost-saving programs allow nonviolent offenders to be released from prison (under supervision) while they await trial, thus eliminating bond agents’ client base. Kristina Gulick, who runs the pretrial release program in Florida’s Broward County, told NPR that the program costs about seven dollars a day per inmate, whereas incarceration costs taxpayers $115 a day per inmate. Broward County pretrial release program ultimately saved taxpayers over $25 million a year, but was slashed at the behest of bondsmen who hired a lobbyist to massage county commissioners. Twenty-three thousand dollars in campaign contributions later, Broward’s commissioners passed a bill that drastically curtailed the program.

Broward County offers yet another example in which the prison industrial complex, aided by powerful lobbying groups, has managed to prevail over fiscally responsible policy-making. Rather than expand its pretrial release program to reduce overcrowding in its prison—an act that would draw the ire of bondsmen and their powerful lobbying groups—commissioners are now considering whether to build a new prison that would cost taxpayers over $70 million. In Baltimore, where the Big Boyz pens are more plentiful than crab-cakes and vacant row-houses, prisons have exceeded their maximum capacity by about 116%.

But even after we acknowledge that the bond business is antiquated, economically discriminatory, unhelpful to taxpayers, and easily replaceable, the annihilation of any industry—especially one to which we have grown so accustomed—is unsettling. If the effects of lobbying and politicking could somehow be suspended, if legislators had the freedom to ignore their most generous contributors, we might still bristle at the thought of hardworking bondsmen—many of whom embody American values such as industriousness and accountability—going out of business. But the breadth of a bond agent’s responsibilities—ranging from social work, commercial lending and law enforcement—reveals that he is suited to any number of alternative professions that don’t contribute to economic inequality and civic profligacy.