Baltimore Is a Half-Newspaper City

While the beleaguered Sun fades away, its owners insult the remaining staff as well as the larger community with an atrocious free daily. 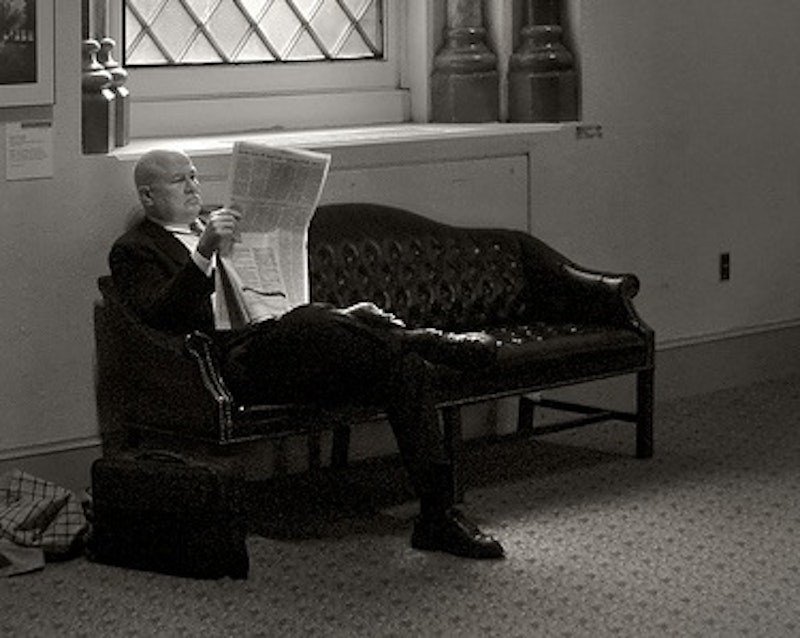 Last Thursday, while waiting on line at Dunkin’ Donuts, I had a most unusual sensation. Flipping through the 24 pages of The Baltimore Sun’s frightful stand-alone free daily b, I read a lackluster story about the Orioles’ hard-luck pitcher Kevin Millwood and, at one point, actually laughed. It’s not my intention to lampoon the writer—a fellow named Matt Vensel, who, as b’s Content Director, is a guy who at least has a job in journalism—but he could use the help of an editor. That person may not exist at b, a tiny operation that not only sullies the historical significance of The Sun, but also mocks the laid-off and bought-off employees at the floundering daily (daily circulation of some 201,830 as of March 31), and if so, Vensel will have to fend for himself.

Maybe he cringes upon reading his prose in print, such as this sentence: “The fact that Millwood, who enters Thursday’s start against the Mariners with a 3.26 ERA, has four losses and a big old goose egg in the win column is inexcusable, embarrassing and should be considered criminal in a court of law.” Nevertheless, the wide berth Vensel’s apparently afforded—it’s highly unlikely anyone with a position of authority at the bankruptcy-encumbered Tribune Co., which still owns The Sun, reads the garbage that’s produced in some cubby hole—sometimes pays off. And so this is why I got a cheap chuckle, for I can’t think of any daily newspaper which would allow the following sentence to escape a delete button: “I would be pissed off if I were Millwood, but to his credit … ”

I’m betting The Sun’s fine sportswriter Peter Schmuck, one of the paper’s few survivors, is plenty pissed off about the state of his employer, but he wouldn’t be permitted to use that word. And, undoubtedly he wouldn’t raise the issue with an editor, fearful that his cell phone might vibrate while covering an O’s game and, just like colleagues David Steele and Rick Maese in the company purge of a year ago, informed that he, too, was laid off.

Such is the state of print journalism in this half-a-newspaper city.

Not long ago I was having a discussion with a politically-connected Baltimorean, and asked him if he ever heard people talking about The Sun these days. “Well, yes,” he said, “but that’s only because their names are in the paper. Otherwise, no. Increasingly, friends and neighbors—and these are older, habitual newspaper readers—subscribe to The Washington Post, New York Times and Wall Street Journal and skip The Sun. It’s a damn shame, but the paper’s a shadow of what it was even 15 years ago, never mind before it was first bought by Times Mirror (The Sun, a family-owned company founded in 1837, sold to Times Mirror in ’86, folded its afternoon paper, The Evening Sun, in ’95, and was then was swallowed by Tribune Co. in 2000).”

At some point last fall, I let my own home delivery of The Sun elapse, and it was weeks before anyone in the household even noticed. As a result, any local news (weather, traffic delays, power outages… the important stuff) is delivered during those two-minute breaks on NBC’s Today, which my wife flicks on each morning, mostly as background noise.

When Baltimore’s Mayor Sheila Dixon resigned earlier this year after a conviction for penny-ante “fraudulent misappropriation”—an event that is still, even in today’s jaded environment, pretty big news—two of my politically-attuned colleagues were not aware of the event until I told them about it. I remember when the late Wally Orlinsky, City Council President and failed gubernatorial candidate, was indicted in 1982 for bribery (and eventually convicted), it was, no exaggeration, the buzz of the city. You actually saw people at bus stops and later in bars, poring through the pages of The Sun and Evening Sun for all the details.

The Sun’s PR department emits a lot of noise about the reach of its website—the enormous traffic, multimedia features, the smattering of blogs by staff writers—but really, I think that’s the kind of happy horseshit that’s instinctual for publicists. I’m a heavy consumer of media, but aside from Dan Rodricks’ column and Schmuck’s blog about the Orioles, I rarely check out The Sun’s website; and even less so in the past year.

Which brings me back to the indignity that b represents: the term “dumbed-down” is so omnipresent that it’s almost devoid of meaning, but if you take the time (several minutes) to read a copy of b it’s simply astonishing and degrading that a once-prestigious institution like The Sun would allow this abomination to be published under its own name. Every week, 375,000 copies of b are placed in street dispensers, coffee shops, music venues, willing retailers and the like, offering 50-word “Newsflashes,” tidbits from The Sun, AP and other Tribune properties, as well as inane “feedback” from readers. One such feature is “Rantrail,” and on May 13 one person contributed this: “I hate that you have a Mustang and refuse to use the gas pedal.” Another: “I hate when people complain all day every day about the simplest things.” If that’s not scintillating enough, there’s also a mild sex column, horoscope and terribly written arts criticism.

Out of curiosity, I asked Mike Bowler, a longtime friend who retired from The Sun in 2007, for his opinion of b (requests to current Sun employees were, unsurprisingly, given the gulag atmosphere at the Calvert St. headquarters, not successful). He said: “[b] is an embarrassment. No matter what you think of The Sun, it was once more than respectable, and this puerile piece of crap is taking resources from what’s left of a newspaper. There’s no way they can be making money on it, so why don’t they put it out of its misery?”

It’s difficult to imagine that b is a goldmine for Tribune—the printing costs alone would seem to swallow up any revenue from the deeply discounted advertisements—but then again nothing that company does makes any sense. It’s possible that Tribune managers, both in Chicago and Baltimore, are simply unaware that by publishing b they’re insulting not only the remaining employees of The Sun, but the citizens of Baltimore as well.