The first U.S. off shore wind farm is a go. 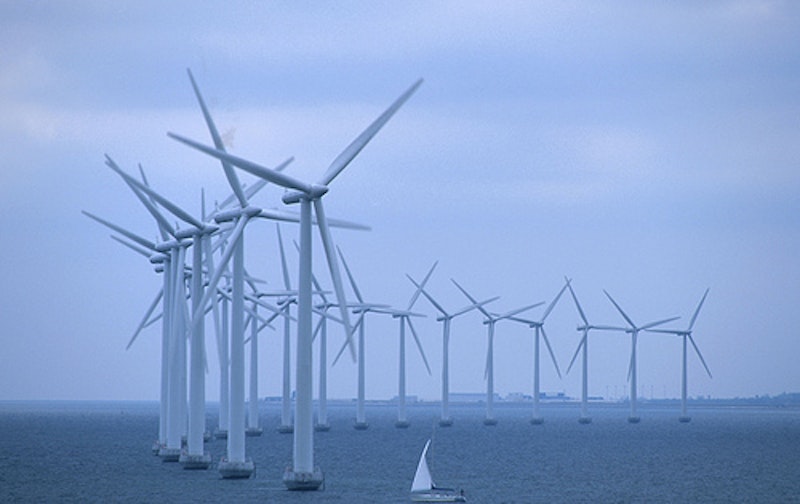 Ladies and gentlemen, the jury has reached a verdict. Finally.

After nine years of bellyaching and regulatory rigmarole, level-headed consideration has defeated childish NIMBY-ism. Concern for future generations has prevailed over entitlements of the past. The will of the people has trumped the whines of the few. At last, the sleepy giants will rise from the depths of Nantucket Sound. Last week, U.S. Department of the Interior Secretary Ken Salazar announced federal approval of the much-ballyhooed Cape Wind project that would generate electricity from high-tech windmills off Cape Cod. For years, strong opposition from local residents—most notably, a very vocal contingent of the Kennedy clan—has held up the development of the offshore wind farm, citing environmental impacts, disruption of sacred Indian burial grounds and an impoverished vista of their beloved cape.

To appease the opponents, Salazar has reduced the number of allowable turbines in the 25-square mile project area from 170 to 130. (Or, five windmills per square mile, the approximate density of downtown Baltimore if only its five tallest buildings were to remain standing.) He has required the turbines to be painted an elegant off-white that will be softer on the eyes while still remaining visible to avian species that might otherwise be caught unawares. And safety lights will be turned off during the day and dimmed ever-so slightly at night so no one confuses them with ships, airplanes or the shimmering brilliance of the night sky.

Cape Wind will be the first offshore wind farm ever built in U.S. coastal waters, and the decision to let it proceed comes at a particularly auspicious moment. Two weeks after the explosion of an oil rig leased by British Petroleum, oil is still spreading across the Gulf of Mexico and onto the Louisiana coast. This ecological disaster should only bolster the case for wind farms that can begin to subsidize our use of dirty fossil fuels.

And yet, the obstinate forces of opposition have vowed to continue the fight against Cape Wind, even though it could provide new jobs and an infusion of cash during difficult economic times.

It all has the familiar stench of hypocrisy, which thwarts environmental progress at every turn. We want clean energy, but not if we have to look at it from our porch. We want a cap on carbon emissions, but only if China and India agree to one too. We bemoan the lack of public transit service, but oppose it cutting through our neighborhood.

I’m not advocating complacency. People have every right to fight in defense of their patch of paradise. That’s the American way—a tradition of forcefully availing ourselves of that which we have no legitimate right to take.

Let’s just remember that the places on this earth that we call home are only on lease temporarily. The plants and animals (not to mention Native Americans) never agreed to the subjugation of their pristine wilderness. We took it without asking and have been enjoying its fruits ever since.

Our assumption of undisputed ownership over land and resources was never an eternal guarantee. There are now more than 300 million people sharing this vast expanse we so cleverly marked off in the name of God and country, including those beautiful cerulean waters of the Atlantic that buffet the coast of the Commonwealth of Massachusetts. Another six billion people can lay claim to the skies we continue to poison with every botched attempt to get cleaner energy off the ground. Most of us couldn’t care less about the alleged rights of a select tribe of seasonal interlopers and devout isolationists to an unadulterated view. We want clean energy, and we want it now.

In fact, we need these windmills—off Cape Cod, Long Island, the Eastern Shore and the Outer Banks. Not just for the relatively clean energy they will provide, but as a symbol of our selflessness and progressivism. We need it to prove to other countries that we are committed to a more sustainable future as much as we need it to prove to ourselv es that we can still lift our heads from our small existences and do something for the sake of the greater good.