We're All in This Together

What I learned at the Women's March in London. 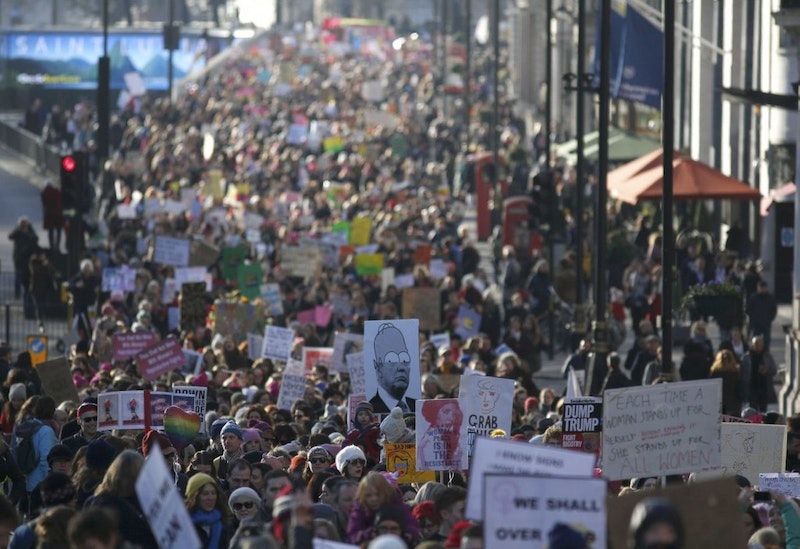 I’m on my way to the Women’s March on London, jumping out at the Central Line at Oxford Circus, a place I usually avoid, not totally sure where to go from here. I fight my way through the exits and stand off to the side, across the street from Topshop, asking my phone how to find the march, but since my hands are freezing I can barely type. A woman walks past me with a sign that says, “Dump Trump” so I follow her, dodging slow tourists and big red London busses that make virtually no noise but are always going faster than they seem. Somewhere along Brook St. I roll past a white guy, walking away from the March, who tells his friend, “Hillary Clinton would have been worse!” and I feel like I’ve just been punched in the stomach.

No, Clinton wouldn’t have been worse, I almost screamed. Was she the best, most progressive choice? No. But we wouldn’t be talking about “Alternative Facts” under a Clinton administration. I’m certain that her administration would not use its first press conference to dick measure the size of the inauguration audience compared to previous ones, and then lie about easily verifiable facts. I’m certain that under a Clinton administration the LGBT, climate change, and immigration rights pages on the White House website wouldn’t be removed, nor would the Vice President be in favor of conversion therapy for gay people.

But, as a (straight) white guy, none of this political correctness stuff matters because it doesn’t necessarily affect you. Why are men in charge of making decisions about women’s bodies, and how do people on the other side of the aisle not see this as a serious problem? How are they not outraged? Men don’t have to have babies, so why should they care?

The only way you could say, “Hillary Clinton would have been worse!” is if your normativity somehow shields you from the most right-wing, conservative policies, where conservative essentially means creating policies for people who are white, male, able-bodied, heterosexual, and wealthy. If it doesn’t affect you, why should you care?

I’d been so depressed in the days leading up to the inauguration that I wasn’t entirely sure what to do. Now, after the worldwide Women’s Marches, I feel rejuvenated. Walking with over 100,000 other people in London was energizing. Seeing all of the creative anti-Trump signs in person and online was also encouraging, and knowing that millions of people from around the world of different backgrounds and life experiences came together to protest Trump was definitely reassuring.

So what do we do now? How to keep this momentum going? To start, the Women’s March has staged 10 Actions for the next 100 days. Every 10 days we’ll be assigned a new action to help us keep up the fight. We need to make “Automatic Google Chrome Cats” life difficult, protesting Trump’s actions, calling out all lies and, more importantly, organizing on the ground. We need to talk to people who voted for Trump and figure out their concerns, and let them hear ours, so that a second term is utterly out of the question. It’s not enough to show up to marches. We need to be involved every day.

A friend of mine made an excellent, if sobering point on Instagram the other day. She said if Clinton had been elected, maybe the world wouldn’t be marching for anything at all, even though marginalized people are always the ones fighting every single day. In that way, Trump proves to be a unifying force; though it turns out people from diverse backgrounds are against him rather than for him. The Women’s March is proof of what happens when we look outside of ourselves and think about others.