At Least the Nazis Could Draw a Crowd 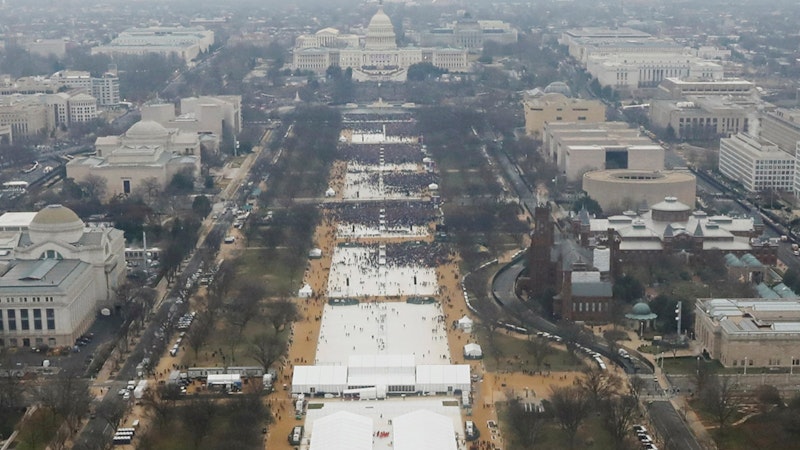 Donald J. Trump is no longer Accident-elect. On Friday he was duly sworn in as full-fledged Accident of the United States. Some people turned out, but not many. An empty bandstand watched Mike Pence smile and wave as he marched along the parade route. Worse, the media ran cruel photos giving at-a-glance comparisons of the Accident’s sparse crowd and the masses that gathered for Barack Obama in 2009.

On Saturday the country’s new boss visited Langley to make peace following his recent disputes with the intelligence community. Talking to his audience of CIA employees, he mused about invading Iraq again. “We should’ve kept the oil,” he said playfully. “But, okay, maybe we’ll have another chance.” But his mind strayed to the vexed business of his inauguration’s turnout. The media was dishonest, he said. He’d turned on his TV that morning and the inauguration coverage showed “an empty field,” whereas he personally had the distinct impression that there’d been a million people or a million and a half. The figure most people are kicking around is 250,000.

As the Accident spoke, Washington was filling up with demonstrators against his regime. The Women’s March had drawn 500,000 people to the city by Saturday afternoon, according to the Associated Press (citing a “city official”). Add the marches in the rest of the country, and newspapers felt safe putting the national total somewhere over a million. Really, the range seems like the one Trump imagined for his swearing-in. Or a good deal higher, if one decides not to lowball the estimates in New York (400,000, according to the mayor’s office) and Los Angles (750,000, according to organizers). At any rate, the pictures told the story, one summed up by a police captain in Los Angeles. “There’s a sea of humanity everywhere,” he said. Trump’s turnout, not to harp on this, was more like a set of rain puddles.

If you’re looking for signs of what America’s about to become, it’s awfully good to see that Trump-friendly bikers weren’t a factor this weekend. They showed in D.C. with the announced mission of keeping protesters from interfering with the swearing-in. Whatever the bikers did, no one noticed much. Instead the Accident’s big TV showed streets, squares, and parks turning dark from all the people marching against him. This is like Weimar Germany, but only if the Nazis and Communists couldn’t turn out any street fighters, and instead the Social Democrats could mobilize millions of peaceful citizens. Which means it isn’t like Weimar Germany. America has dropped itself in a very rough patch, but not as rough as that.

Yes, America could still become a dictatorship. We have an overcomplicated political system that’s breaking down, and about half the electorate’s too debauched to understand civics. These very substantial factors have dumped into the White House a man who’s a greedy brat. He’ll do his best to be dictator because grabbing is his nature. Now that protesters have pulled his nose, he’ll be hot to have the law beat them down and stamp out anti-Trump thoughts. And he’s allied with a party that has staked its future to gerrymandering and voter suppression. Trump and the Republicans have Congress, and soon they’ll have the Supreme Court. At that point the regime’s limits for legal maneuver may expand in ways that astound political experts (who, of course, have been surprised by nothing that’s happened during the past 19 months). A terrorist attack, real or fake, may be used to stampede, or try to stampede, the nation.

All that’s very grim. But any attempt at a putsch will have to get by without Brownshirts, not unless Trump and his crew become much better organizers. And it will have to face a country where most of the people still understand democracy and want to keep it. America’s in a bad way, but the patient’s going to rally. This country wants to live.