We Need to Pay Attention to the Alt-Right 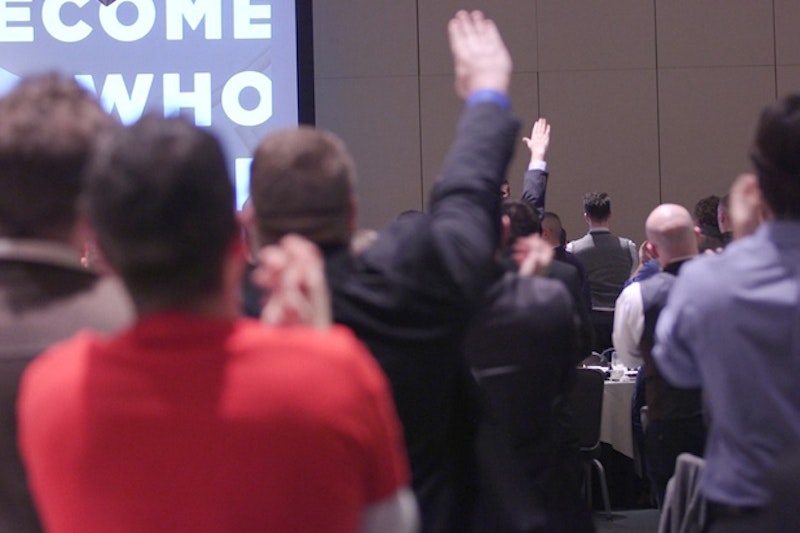 When my clock radio went off the other morning, I heard a crazy, disembodied voice shouting, “Hail Trump, hail our people, hail victory!” It was quickly followed by Green Day: “Don’t wanna be an American idiot!” Clearly, the station was having some fun. The voice belonged to Richard Spencer, who gave the alt-right its name, and is head of the National Policy Institute (NPI). Spencer and his organization recently hosted a Washington, D.C. conference where he gave a rousing speech that ended with “Hail Trump!” and the audience enthusiastically responding in like, complete with Nazi salutes.

Bill Maher’s recent mea culpa may have been more prescient than he realized—that liberals cried wolf too many times by too frequently labeling Republicans as sexist and racist, that it’s now impossible to stop an actual bigot. Maher was talking about Donald Trump, but now that argument can extend to Steve Bannon, and perhaps the alt-right movement as a whole. As Bannon has become an integral part of Trump’s team, I’ve seen a lot of comments responding to lefty hand-wringing along the lines of “Calling someone a racist doesn’t work anymore, you dumb libtard!”

Is the media equipped to deal with the alt-right? In the short term, my answer is no.

The alt-right thinks in cinematic terms, they’re constantly making references to The Matrix and Fight Club. That Breitbart editor Milo Yiannopoulos has defined himself as “the most fabulous supervillain on the Internet” is telling, and many people eagerly associating themselves with the alt-right are openly embracing the villain role. I’ve seen a number of tweets describing Trump as their Lex Luthor: as President Luthor fought an invading super-powered alien from outer space, a President Trump will fight the illegal alien invaders of the Middle East and Latin America. I’m reminded of how Robert DeNiro’s hitman character in Goodfellas was described as someone who always rooted for the bad guys at the movies. In a recent interview with The Hollywood Reporter, Bannon said: “Darkness is good. Dick Cheney. Darth Vader. Satan. That’s power. It only helps us when they get it wrong. When they’re blind to who we are and what we’re doing.” He also goes on to compare himself to Thomas Cromwell, whom Henry VIII had executed for treason. So I think it’s appropriate to look at the alt-right as a movement of wannabe bad guys, since that’s what they’re telling us they are—anything less would be rude.

In an essay instructing fiction writers on the creation of believable villains, psychiatrist and novelist Charles Atkins breaks down the narcissism, sociopathy, borderline personality, and paranoia that push people past the edge of reason. The narcissist can’t handle rejection; a normal person learns to manage their frustration, where the narcissist plots vengeance. The sociopath is without empathy and guilt, and is entitled to the point of believing society’s rules don’t apply to them. The borderline personality is a black and white thinker, seeing the world as filled with only allies and enemies. Paranoia is the belief the world is out to get you, directing rage at a perceived persecutor.

Atkins’ character-building is consistent with a Canadian study that examined the psychology of Internet trolls, who often exhibited signs of the Dark Tetrad: narcissism, Machiavellianism, psychopathy, and sadism. Sadism, in particular, stood out to researchers as both a motivation for trolling, and a motivation for finding like-minded people. While sadists have little outlet for their predilections in polite society, Internet trolling has emerged as a sufficient substitute, with the researchers concluding, “Sadists just want to have fun and their Internet is their playground.” And Bannon’s Hollywood Reporter interview strikes me as an act of trolling, embracing the villain to get a rise out of readers; “darkness is good” is too reminiscent of Wall Street’s “greed is good.” Yiannopoulos might be more famous for being a troll than a writer, particularly after being banished from Twitter for instigating a trolling campaign against Ghostbusters actress Leslie Jones.

What’s interesting is that a right-wing movement embracing the role of a villain isn’t particularly new. In Thomas Frank’s book The Wrecking Crew, he described the New Right’s emergence in the 1980s as cultivating “an air of swaggering truculence.” He goes on to describe bullying’s “special, exalted position” on the right, and doesn’t regard it as a coincidence that both Tom DeLay and Oliver North were both nicknamed “the Hammer.” Jack Abramoff took pride in cultivating his bullying skills while in high school and college. Frank sees that thread continuing through to a 2006 CPAC speech given by Ann Coulter where she concludes: “If you’re going to be a conservative in America, you can’t be a pussy.” That Coulter went from New Right girl wonder in the '90s and is now a grande dame of the alt-right with her Breitbart column is a connecting thread that shouldn’t be ignored.

In response to Rachel Maddow’s report on the NPI conference, Coulter went on a defensive Twitter tirade: “Total # of deaths connected to American Nazi Party in last quarter century: ZERO; Total # of deaths connected to Al Sharpton: 9 I know of.” The conservative site Red State responded, “While everyone with an ounce of human decency is running away from these racist basement dwellers, Coulter is running to them with open arms…They can have each other.” How one responds to the alt-right is becoming a Rorschach test for Republicans. Trump finally issued a weak response: “It’s not a group I want to energize. And if they’re energized I want to look into it and find out why.” It’s weak because he went after the Hamilton cast with greater aggression. Trump also suggested that if he believed Bannon was a bigot in association with the alt-right, he wouldn’t have hired him. The same Bannon who told Mother Jones that he turned Breitbart into a “platform for the alt-right.”

Breitbart, as a whole, has been fairly inconsistent about what the alt-right means to them. Some of this could be attributed to differences in writers. I think Bannon answers that question in comparing himself to the treacherous Cromwell, that he’s willing to do anything for power, even use white supremacists as his foot soldiers because they’re easy to discard under the inevitable media scrutiny. In a broader context, I’ve also considered this as a reason that Republican leaders, including Trump, have been dragging their feet to definitively denounce the alt-right. This is also why I’ve come to look at Trump’s pending appointments as such a parade of malignant narcissism that it could play out like a sequel to I, Claudius.

I think the media would be wise to give more attention to conservatives like Ben Shapiro and David French, who’ve been outspoken in their opposition to the alt-right—sometimes at personal risk—and perhaps let them define the narrative. The left’s whiny approach to identity politics have turned us into the movement that cried wolf. We should reshape the argument into something more patriotic, that defending the equal rights of all citizens is the American way, and that the genius of the Constitution is that it can be amended to expand those defenses. That defense is made easier by someone like Spencer, who wants to get away from the ideals of the Declaration of Independence.

But denouncing Nazis should come so easily that even a Blues Brother could do it.