Expect increasing secession calls from different parts of the country. 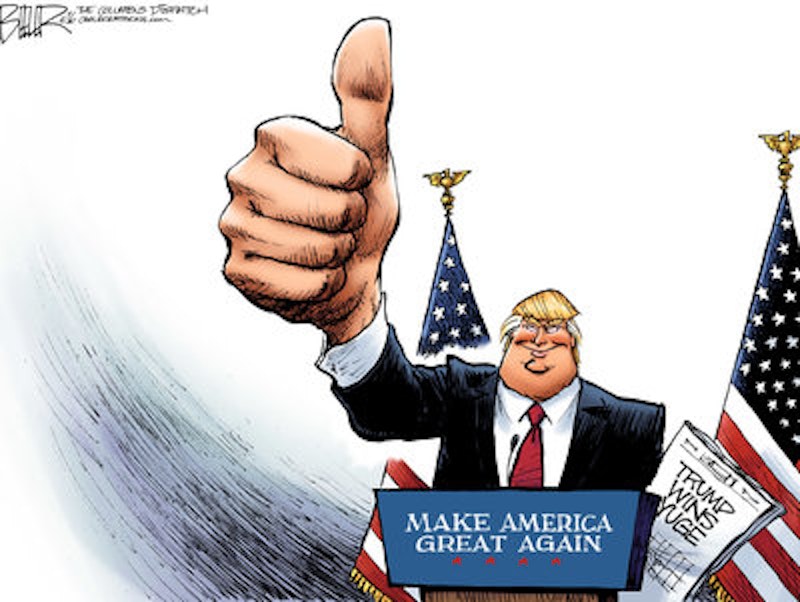 During the recent presidential campaign, the militant Peoples’ New Black Panthers Party declared that its goal was to fence off and declare a cluster of Southern states a sovereign black nation within a nation where blacks could live under their own laws unbothered by whites. Just recently, Richard Spencer, leader of the so-called alt-right, declaimed that his aim was to establish an all-white “ethno-state” that would ban all minorities. And over the years, surveys have repeatedly found that a majority of Mexicans, including those in the U.S. illegally, believe that a large chunk of southwestern states plus California rightfully belong to Mexico and will inevitably become the Mexican Republic of the North.

Only recently, a petition was launched to withdraw Oregon from the union to protest the election of Donald Trump, only to be cancelled after vulgar reprisals. The secession petition called for a working confederation among Western states, including Oregon, California, Washington, Nevada, Alaska, Hawaii and Canada’s British Columbia.

Hispanics of many dialects make up nearly one quarter, or 4.2 million, of the population of Florida, most of them clustered in and around Miami, territory formerly the exclusive domain of Cuban refugees who now share the area with growing populations of El Salvadorans and Guatemalans. And to the north, the city of Dearborn, Michigan, has been taken over by Muslims who’ve become the dominant population. Still, the greatest number of new arrivals in America are not from the war-torn mid-East or political refugees from Central America. They are Chinese.

Is this the polyglot nation President Barack Obama envisioned when he gestured expansively toward the diverse—in accomplishment, gender, sex, religion and color—gallery of recipients of the Presidential Medal of Freedom and declared, “This is America.” Or is this a country heading like an uncontrollable tribal nation that’s about to break apart into disparate pieces as did the Balkan nations, the former Soviet Union and as is happening before our very eyes in the mid-East—in a familiar phrase, the kind of isolationist straight jacket that some consider the vision to “make America great again.”

It has been a hallmark of the Obama presidency to celebrate diversity as a strength of democracy and not something to be feared. And now it seems as if Trump or, at least, his followers who’ve taken his poisonous words literally, are determined to undermine the welcoming nature of America’s open borders that have been a virtue of this nation since its founding. Populism, nationalism, and other -isms cyclically rear their ugly and menacing heads, most often in times of economic distress. Much of the agitation turns out to be hot air from hot heads, culturally manageable, that eventually exhausts itself into the mainstream, if not asterisks in history books. Consider, for example, the Civil War, the upheaval of the 1960s and the Vietnam War era, the McCarthy convulsions of the early 1950s, the Great Depression and the flirtations with communism and, most significant of all, 1776, the formative year when many of the founding fathers were rabble-rousers and hell-raisers as much as freedom-seeking statesmen.

The campaign rhetoric has so inflamed passions that the usually unthinkable and indivisible nation is theoretically, at least, being torn apart in the minds and hearts of those who till its soil, stoke its furnaces and man its ramparts. For it has been observed that Trump did not really manufacture the thoughts and words he uttered. But he skillfully read the minds and thoughts of those who longed for someone to echo and champion them. To his many enthusiasts, Trump’s words were the sounds of self, expressing the momentary politics of white identity. Trump received nine percent of the black vote and 29 percent of the Hispanic vote, underlining the divisions within the nation of 320 million.

So hear the separatist voice of the witless Spencer, head of the white nationalist National Policy Institute, who describes himself as an “identitarian,” but who the Southern Poverty Law Center, which tracks hate groups, calls an “academic racist,” according to reports. “Richard Spencer’s clean-cut appearance conceals a radical white separatist.” Recall that Spencer caused a momentary stir when he and others mimicked the Hitlerian “heil” salute with the outstretched stiff-arm, “Hail Trump,” at their white nationalists’ convention in Washington. Spencer once dated an Asian-American but now says he would never date a non-white again, according to reports.

In a Thanksgiving message, the transactional Trump seemed to discourage and disavow such divisive activities: “Emotions are raw and tensions just don’t heal overnight. It’s my prayer that on this Thanksgiving we begin to heal our divisions and move forward as one country strengthened by shared purpose and very, very common resolve.” Yet Trump continues to resist pressure to dump Steve Bannon, the CEO of Breitbart News, the website that specializes in hate news, whom Trump has designated as his chief strategist in the White House. Trump has also weaseled when he stated that he did not believe Breitbart encouraged separatism with its incendiary stories and headlines such as, “Bill Kristol: Republican spoiler, renegade Jew” and “Birth control makes women unattractive and crazy.”

And consider the opposing voice of Babu Omowale, the Black Panther’s National Minister of Defense, who wants to partition off Louisiana, Mississippi, South Carolina, Alabama and Georgia into a separatist black nation: “We need to start migrating back to those states and taking control of the economies of those states. If black people move in, most definitely white people will move out, so it’s not a hard process for us to have our own country within a country.”

The Mexican reclaiming of the Southwestern U.S. is the pipedream of Charles Truxillo, a professor at the University of New Mexico. His fantasy is supported, he claims, by polling data in Mexico and Hispanics the U.S. The states Mexico would repossess are California, Arizona, New Mexico, Texas and Southern Colorado. There is an “air of inevitability” that they would become the Nation of Aztlan, the Hispanic homeland, Truxillo has proclaimed.

The idea of a flyover America has contributed in the abstract to the notion that many citizens feel disconnected from the complex nation at-large and a longing for a simpler time of economic security and social sameness. Abraham Lincoln, America’s greatest president in the view of many, built the transcontinental railroad as a way of uniting the nation after the Civil War had threatened to split the young country into competing parts. And of lesser grandeur but no less important, President Dwight D. Eisenhower built the Inter-State Highway system which links all 50 states. And to drive it, crumbling as it may be, gives Americans a sense of awe and belonging that air travel cannot. For in the end, the only rhetoric that matters is not the words of Trump or Bannon or Spencer or any other tin-pot politician, but the unifying words that are inscribed in the Constitution and the laws of the land—United States of America.