Trump has Fun at His Briefing

Scenes from the first hundred days. 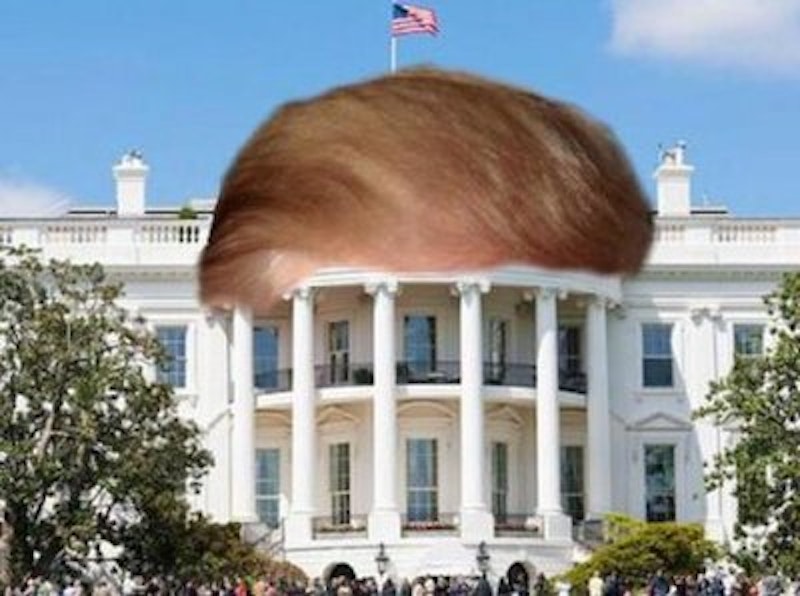 Donald Trump’s going to move a big television set into the Oval Office. With luck, Kellyanne will talk him out of having the doorways or walls fiddled with. He’ll settle for a screen that’s five feet high instead of eight feet. But furniture will have to get moved around, taken out. That thing’s going to take up space. When the national security aide comes for the daily briefing, the guy has to shout over Morning Joe or Fox & Friends.

Pretty soon Trump starts to wait until the aide’s seated, then turns up the volume. (His remote will be about three feet long and have enough sections and buttons and little inset panels to resemble a baton from Jack Kirby’s Asgard.) Trump has spotted a shift in the aide’s jaw and perhaps a hitch in one buttock as the fellow straightens up. These habits signal the moment when the aide has decided to find dignity in doing his job despite what he has to put up with. At that moment Trump turns up the volume up.

After a few weeks, a different aide appears. “No,” Trump says. “Nah, nah. No.” He stabs at buttons on his phone. “Who do I call?” he says into the phone. “Tell them I want, uh, Brendan. You know? For the briefing. Not, uh—” And he gestures at the new aide, who’s hovering by his seat, wondering if he should sit down. “Yeah, you can go,” Trump says, but he’s still talking into the phone. “Yeah, yeah, go. Not you,” he says to whoever’s on the other end. “The guy standing. You, the guy standing. You. You go. Door. There.”

The next morning the first aide’s back. “Brennnn-dan,” Trump says. “I thought you didn’t like me. You got transferred, what?” The TV’s on low; Brendan’s relieved. Trying to be droll, he utters something Georgetown-sounding about finding a modus vivendi. “Like, I don’t appeal?” Trump continues. “No good for you? I got to say, Brendan, that kind of surprised me, having you bug out. You put in for that transfer, am I right?”

Brendan, who did put in for it, tucks his chin a quarter-inch closer to his chest. Trump sees that.

“I can ask,” Trump says. “You’re working for me. So I want to know: you put in or you didn’t put in? I just want to know.” He’s looking at Brendan’s throat, the Adam’s apple. He’s waiting for it to hop.

“Yeahhhhh, I’m going to check that,” Trump says. The Adam’s apple, instead of hopping, appears to burrow between Brendan’s throat tendons. “Uh huh!” Trump says nice and loud, as if announcing to the room. Then he lets it go. “Okay, come on,” he says. “The… Houthi. I want to hear what’s up. Give it to me.”

“Yes,” Brendan says, inclining his head over his papers.

“The briefing, okay? You got the time?”

“Those winter blues can need some beating,” says Ainsley Earhardt. “Stick with us, we’ve got helpful hints on the way.” The television’s nice and loud again.

“Brendan,” Trump says, voice up so it can carry. “Hey, Brendan. Get used to it.”