Mainstream Media Flummoxed as 2016 Winds Down

Hillary Clinton wasn’t the only person humiliated by election results. 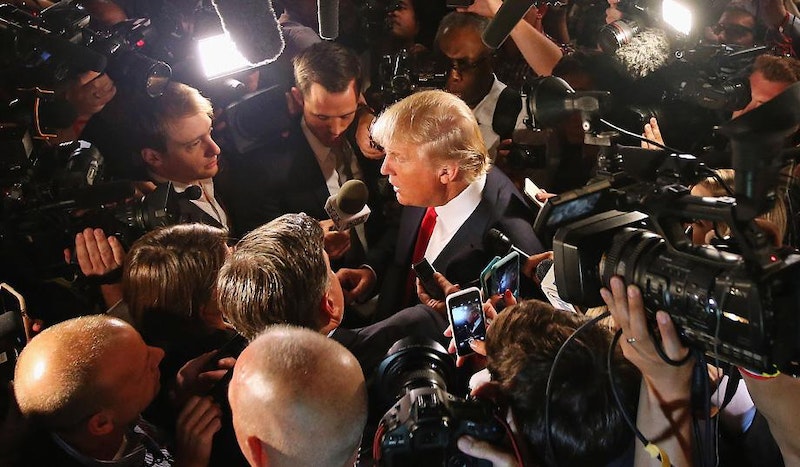 This is how confused and fractured The New York Times is in 2016: on Sunday the paper ran a long, detailed investigation of Donald Trump’s myriad business conflicts of interests across the world (of course, the front page was dominated by a fawning portrait of the merciful death of Fidel Castro), an important story that not even 10 years ago would’ve dominated the news. You’d think the Times would follow up on the investigation the next day (Nov. 28th), but Trump, who’s crazy as a Krugman, baited its editors—and most media outlets—with an outlandish and stupid tweet on Sunday, in reaction to the likely quixotic recount efforts in Wisconsin, Pennsylvania, and Michigan, spearheaded by attention-seeking Jill Stein.

As most readers interested, and outraged, by politics, know, this is what Trump tweeted: “In addition to winning the Electoral College in a landslide, I won the popular vote if you deduct the millions of people who voted illegally.” On the surface, Trump’s pique is so moronic, that it’d appear his 10-year-old son Barron has helmed his father’s social media campaign for the past 18 months. In reality, someone on Trump’s staff, if not the president-elect himself, knew that a ginned-up controversy (similar to how the Hamilton flap 10 days ago buried Trump’s settlement of fraud charges over his bogus university) would overwhelm the increasingly cluttered “24/7” news cycle, and blunt infinitely more serious questions about Trump’s fitness for the White House. And, sure enough, on the front page of the print edition of the Times I received Monday morning, the A-1 story was headlined “Trump Promotes s Baseless Claim on Illegal Voting.”

That decision by Times editors is no longer odd: in a media environment where its revenue declines nearly every quarter, with more buyouts and layoffs coming—on the heels of The Wall Street Journal’s downsizing staff and pages in its print edition—the storied company no longer produces “the paper of record” as it fights for page views with the likes of BuzzFeed, Politico, and, God help us, The Huffington Post, among others. The Times, as well as the Journal and Washington Post (does anyone ever even notice once powerful dailies like The Los Angeles Times, Chicago Tribune, or Boston Globe anymore?) aren’t exactly bit players in the media, but the future’s slipping away. The Times’ investigation into Trump’s tangled, some might say corrupt, involvement with overseas businesses was hailed by liberals on Twitter, with justification, but here’s the problem: on social media platforms, people struggle, whether out of laziness or new, unconscious conditioning, to read more than a headline, to say nothing of 250 words. That doesn’t stop a torrent of comments, obviously, because that’s the media landfill that’s soiled part of our national culture.

As I’ve noted repeatedly this year, serious journalism is either out of fashion, or, more ominously, a vestige of the past. After Trump’s election, writers took to Twitter and Facebook to exclaim that liberal venues like the Times and New Yorker were swamped with new subscribers. I challenged a New Yorker writer on Twitter about this claim, asking if she were privy to the weekly’s bottom line, and she blithely said no, but that’s the buzz in the marketing department! Last week, The New Yorker ran an Obama special, filled with essays about the 44th president’s legacy. Aside from editor David Remnick’s piece (and Remnick’s an Obama biographer), the issue didn’t cause a ripple. Case closed.