Castro and His Parrots on the Left

American hagiography of the Cuban despot is insulting. 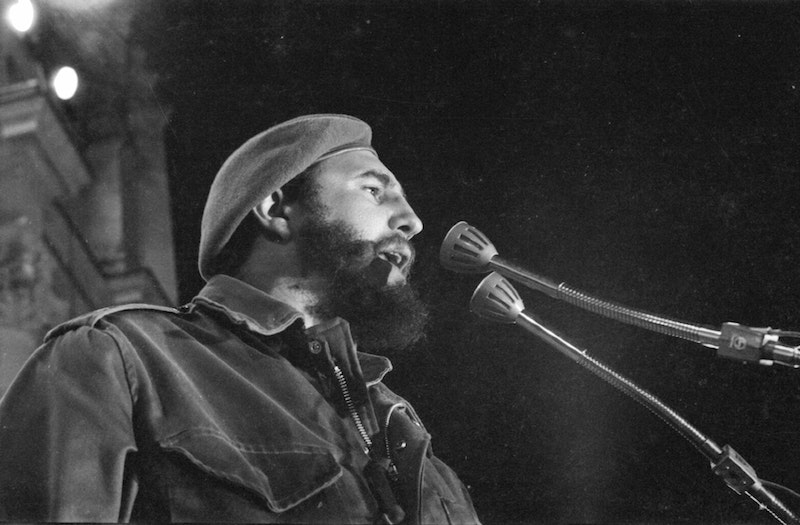 Among all the ridiculous and insulting hagiography of Fidel Castro, pouring out from parts of the media and people on the far left, CBS’ Sunday Morning profile—historian Douglas Brinkley was especially fawning—stands alone. This show, about as anodyne as they come, called Castro “David to America’s Goliath,” and for 10 minutes, they shooed away his brutal and oppressive regime in favor of praise for the “master of political theater” and his ability to continually outsmart the CIA and the American government, by allowing Cubans to leave legally but only sending criminals and the mentally ill, allowing foreign development and resorts to pile up, legalizing the U.S. dollar after the fall of the Soviet Union, and yes, outliving hundreds of assassination attempts. The piece ends with this: “The man the United States tried so hard to topple tormented eleven American Presidents, and died on his own terms.”

I feel like Daffy Duck, totally tongue-tied at all of this. How can any activists lamenting the death of their “comrade” square Castro’s history with their own criticisms of the United States? Everyone keeps going on about Cuba’s universal healthcare, 99 percent literacy rate, stellar doctors, infant mortality rates, and life expectancies that barely surpass ours, and the inspiration of successful resistance against American hegemony. Everyone loves an underdog. It should be obvious to everyone that Castro is irredeemable: he executed political dissidents, jailed artists and activists, tormented blacks and homosexuals, and behaved like an egomaniacal despot. Too paranoid of losing power, he shunned democracy and free speech and propped up his cult of personality with the bodies of everyone that dared oppose him or speak out. I know the far left is just so desperate for a charismatic leader that they can all get behind for once instead of constantly fighting amongst themselves. But giving Castro any shred of praise betrays a startling double standard when it comes to basic human rights. A lot of people would rather have a successful socialist state to flout about than acknowledge the typical tyrannical evil that Castro was guilty of.

I read President Obama’s and President-Elect Trump’s statements side by side, and they’re both valid: Obama, pragmatic to a fault, offered his “condolences to Fidel Castro’s family,” and assured Cuba that they “have a friend and partner in the United States of America.” I don’t take any issue with this—Cuba never attacked us, theirs was always an abstract existential threat that very briefly 50 years ago became very real very quickly with the Cuban Missile Crisis. The embargo with Cuba and our strained relationship with them is outdated and very much a 20th-century holdover that we have no use for. At least he didn’t give the guy a full-on BJ like Justin Trudeau—for once, Ted Cruz was spot on, denouncing the “slobbering adulation” of Trudeau’s bizarre eulogy.

But unlike Obama’s stale rhetoric and sterile diplomacy, Trump’s vulgar and uncompromising approach just rings more true this time: “Today, the world marks the passing of a brutal dictator who oppressed his own people for nearly six decades […] Fidel Castro’s legacy is one of firing squads, theft, unimaginable suffering, poverty and the denial of fundamental human rights.”

Castro deserves no quarter for what he did to his own people. Clueless apologists may argue that Castro had to be oppressive because America was up his ass constantly. Well, with good reason! Every argument circles back to blaming Western Imperialism and dismissing the very same human rights violations that we protest here—freely!—all the time. Don’t you love that we can do that? And aren’t you getting a little hysterical over there talking about Trump doing away with elections? We’re going to have another election in four years. That’s more you can say for Cuba, where you won’t be bankrupt by a broken leg but you can’t publish zines or speak out against the orthodoxy without fear of brutal reprisal. Cuba sounds great—everyone can read, but you can’t read everything. Rocio Montes, a young Cuban speaking with The New York Times yesterday said it best: “‘Fidel and Raúl started out with a good idea,’ she said. ‘They just didn’t achieve what they said they would achieve.’”