This summer's discontent isn't specifically about health care, but rather a vehicle for political frustration. 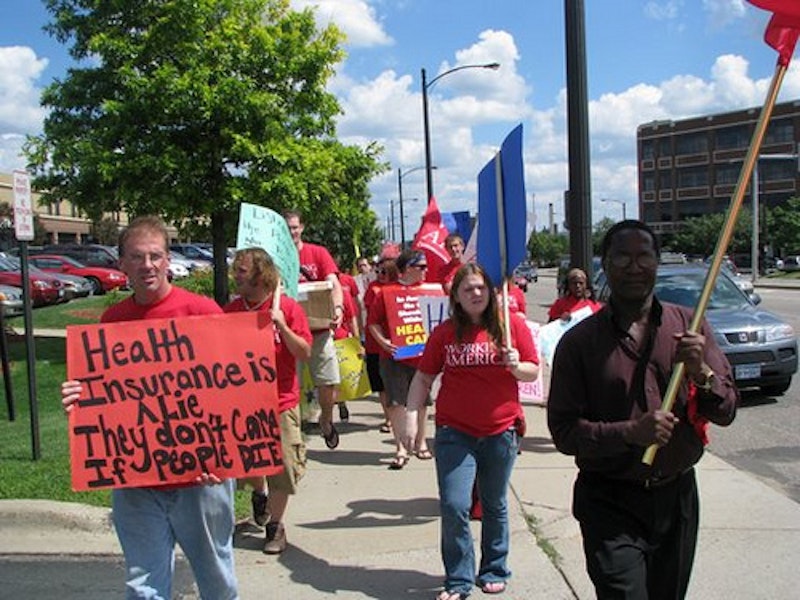 Here's a question, one that's not at all facetious: Why are so many Americans, from the media to academia to think tank "experts," to town hall protesters, surprised that a left/right battle, mostly verbal, has erupted this summer over President Obama's ambitious health care proposal? Reading the comments from both sides, you'd think this was a unique phenomenon that has no precedent in the country's ongoing political dialogue.

It's as if there's a collective amnesia at work: spanning back just a generation, there have been heated disagreements, most with the fervor of the current brouhaha, about President Bush's push for partial social security privatization; gay marriage; the invasion of Iraq; the 2000 Bush/Gore Florida recount (which lasted eight years); the impeachment of President Clinton; Clinton's own universal health care legislation; the first President Bush's backtrack on raising taxes; the no-nukes rallies; and the Howard Jarvis-led 1978 revolt in California that led to the enactment of Proposition 13. Oh, and let's not forget the fictional news anchor Howard Beale from the film Network, whose catchphrase "I'm mad as hell and I'm not going to take it anymore!" long ago entered the lexicon and is familiar even to those people who never saw the 1976 film.

Today's anger over health care is, in reality, a vehicle for venting about the function of government. It's an all-inclusive, no middle-ground debate that's exacerbated by the continuing recession, uncertainty over Obama's economic stimulus, the bank and GM/Chrysler bailouts, feigned shock that men and women in the financial industry draw enormous salaries, the steady stream of revelations about the tawdry or unethical conduct of elected officials, and, in the background, both the exhilaration and frustration about how the way people communicate with each other is in rapid transformation.

And, as Peggy Noonan wrote in The Wall Street Journal last week, all this inflamed rhetoric now is also partially a result of Obama's "gobbledygook" on health care; words like "single-payer" and "public option" and "insurance marketplace exchange" either aren't clear or haven't been adequately explained to the American voter. I don't share this following notion of Noonan's, but at least it's charitable, unlike the proclamations of many of her colleagues: "The president in the past month has been taught a lot by the American people. It's all there in the polls. [As usual, op-ed writers use un-cited "polls" loosely, to buttress their opinions.] He could still step back, rethink, say it didn't work, promise to return with something better. When presidents make clear, with modesty and even some chagrin, that they have made a mistake but that they've learned their lesson and won't be making it again, the American people tend to respond with sympathy. It is our tradition and our impulse."

My own opinion is that if Obama followed Noonan's advice he wouldn't be rewarded in the polls, but would immediately be twinned with Jimmy Carter.

Like any controversy that captures the public's attention, the opposing sides this month are talking past each other, so certain in their beliefs that no one takes a moment to even consider the merits, or lack thereof, of reasonable counter-arguments. Here's a simple example that illustrates the chasm between groups of various demographic and political categories: the topic of New York City. One person says, "I hate New York. It's dangerous and scary at night, filthy, crowded, impossibly expensive, filled with rude people and you can never find a parking spot." The other lashes back, "I love New York. It's the cultural center of the world, with priceless museums, architecture, restaurants, an embracing assimilation of people from all over the world, a literary mecca, lots of quirky characters with hearts of gold, and a rush of energy that you can't find anywhere else in the United States."

Neither person responds to the other, but rather continues pounding, and pounding his or her points into the ground. And that's what's happening today with the disagreement over health care-let alone abortion (still!), tort reform, taxes, school vouchers, unions (corrupt or vital?), gambling and euthanasia, which is certain to be the next "moral values" flash point.

Frank Rich, despairing over Obama's apparent unwillingness to exercise his perceived electoral mandate, wrote in the Aug. 23 New York Times, exemplifying liberal myopia: "The G.O.P., whose ranks have now dwindled largely to whites in Dixie and the less-populated West is not even a paper tiger-it's a paper muskrat." This is plainly nonsensical, for just four years ago the Republicans controlled both the presidency and Congress: political parties do wither out, but not that fast.

Rolling Stone's Matt Taibbi makes the rhetorically rambunctious Rich appear tame, claiming that the health care impasse proves "another failed system: the political entity known as the United States of America." In the same Sept. 3 issue of RS, Taibbi refers to Democratic Sen. Max Baucus as a "dick" and longtime conservative commentator George Will as a "douchebag." As for "Blue Dog" Democrats, he's even less kind: saying they're a "powerful bloc comprised mostly of drawling Southerners in ill-fitting suits... a gang of puffed-up political mulattos hired by the DNC [read: Rahm Emanuel] to pass as almost-Republicans in red-state battlegrounds."

Equally fatuous are the claims by right-wing hysterics-Limbaugh, Glenn Beck, Bill O'Reilly, Michael Savage, Sean Hannity, writers at the website The American Thinker, take your pick-who brand Obama a "socialist" or "Nazi" who's taking his cues from the likes of Hugo Chavez and Michael Moore. And it's simply embarrassing that some fringe conservatives who have a megaphone insist that Obama's a Muslim and wasn't born in this country.

The United States, despite the cyclical successes and defeats of the Democratic and Republican parties, remains a politically unpredictable nation. Fundamentally, citizens to the left of center believe in and trust big government and have inherent antipathy toward the private sector. They are not, by and large, troubled by unfettered public expenditures because of a basic belief that a gigantic national debt isn't a problem. On the other hand, citizens to the right of center have faith in the private sector and only trust limited government; they fear a Congress, such as the one led today by Nancy Pelosi and Harry Reid, that's willing to open the public's wallet to solve any problem. (George Bush increasingly alienated conservatives by his own profligate spending.) And these citizens are extremely concerned about the ultimate consequences of an enormous national debt being something that will have disastrous consequences over the next few years, not a generation from now.

Ultimately, there will be no national consensus on health care, which is why Obama will probably get, at most, a watered-down version of the idealistic blueprint he spoke about during last fall's campaign and shortly after he was inaugurated. There was a window this spring, when Obama could no wrong with the media and his millions of supporters, a time when even moderate Republicans were willing to give him a chance, that he could've done the heavy lifting and arm-twisting in Congress on health care-which, as I've written before, apparently isn't in his political DNA-but he punted, just as he did on no-consequence issues like the abolition of the military's don't ask/don't tell dictum about gay soldiers and repealing the Defense of Marriage Act.

Now that he's squandered that opportunity, Obama has presumably realized that re-jiggering one-sixth of the nation's economy with universal health care won't work (at least in private), and he can't win with anyone. The issue has become like abortion, you're either for it or against it, and no middle ground exists.