We Must Protect the Rights of All Americans

It's more important than ever after Orlando. 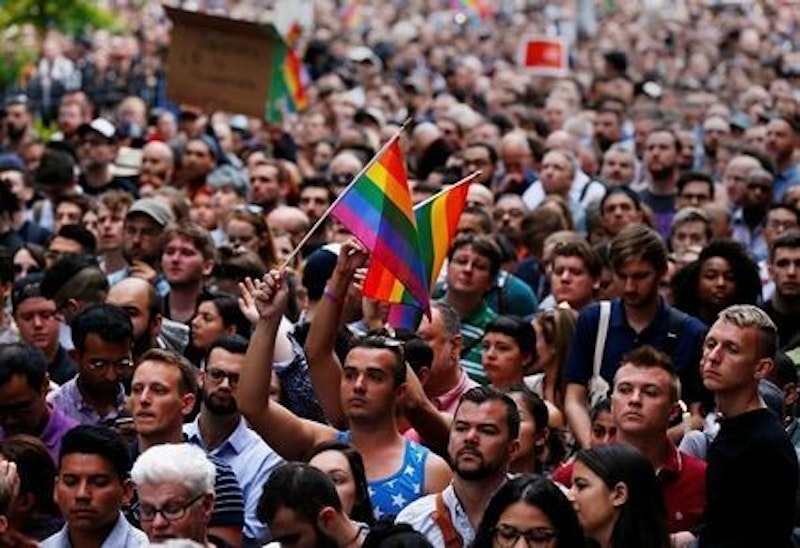 When I was a small child in the early 1980s, my family made a trek, via station wagon, from Chicago to Los Angeles to visit some relatives. We had lunch at the Original Pantry one afternoon, and my mother noticed a very frail man at a table near ours. He was so thin and pale. One of the quirks of memory is that I don’t remember if I saw the purple sores associated with advanced AIDS, but I remember the conversation between my parents in the car afterwards. They concluded the man had AIDS, and was probably terminal. My father, who followed the news closely, was more ahead of the curve than my mother at that point, knowing that the man should enjoy eating out while he still could without risk of contaminating anyone.

Whenever I see incidences of violence aimed at the LGBT community, I’m always reminded of the man at the Pantry. As I saw the news about the shooting in Orlando, and how a nightclub that was a haven for people of color as well as LGBT people was targeted, it was a terrible reminder that there’s still work to be done to protect equal rights for all.

There’s variance in state laws regarding how hate crimes are recorded, so it’s difficult to get a full statistical grasp of how persistent threats of violence remain. The Southern Poverty Law Center notes that they saw an increase in anti-gay hate groups from 2010-2011, and a study of 102 acts of violence against transgender people found that about 10 percent of those were attacks against children under 18.

To gain a better understanding of the threats that LGBT people live with, I spoke with Anthony Martinez, founding member of the Civil Rights Agenda. He said that with civil rights progress comes inevitable waves of backlash, and that the way to make lasting gains is to win the battles for hearts and minds. As for more specific threats of violence, Martinez said that victims are often attacked in settings when they’re at their most vulnerable or intimate, like a same sex couple holding hands, or a transgender person using the washroom. He was emphatic that this was an act of terrorism targeting the LGBT community, and that the responsibility lie with the gunman.

The inevitable questions will arise about the attacker’s access to guns, or the role his faith played in motivating the assault. While those ideas are explored, we can’t forget about protecting the rights of our fellow Americans—provided we remember that our fellow Americans and the LGBT community are not mutually exclusive. Except for Marco Rubio, no conservative members of Congress who have offered their condolences have acknowledged that this was a specific attack on LGBT people.

Donald Trump has practically turned this attack into an outright condemnation of Islam, which will only have the effect of silencing and alienating peaceful, reform-minded Muslims who not only condemn the attack, but also support equal rights. In a recent interview with Fareed Zakaria, Islam scholar and reformist Irshad Manji said that she sees no conflict between her faith and being a lesbian: “I really haven’t struggled. And my lack of struggle at being a gay Muslim really comes from the fact I have deep faith in God. And this is not a God whom I fear, it is a God whom I love, and I believe loves me back. And what I find so ironic is that, even mainstream Muslims, especially mainstream Muslims, say that Allah is omniscient, and omnipotent, He cannot make mistakes, He knows what He is doing. Great. Well, in that case, He knew that He was creating somebody like me. Did He make a mistake in doing so? Fareed, I’m not saying I’m right, I’m just saying let’s have the humility to leave the final judgment to God Himself.”

This attack in Orlando comes at a time when we’re more open and tolerant of diversity than ever before. To go back to when I saw the man at the Pantry, the federal government was still dragging its feet in acknowledging the AIDS crisis. To this day, 29 states do not have any protections for LGBT people from job discrimination. A recent government study found that 19 percent of transgender or gender non-conforming people surveyed faced discrimination when trying to buy or rent a home.

On the other side, Americans maintain that freedom of religion is an integral part to our national identity. Yet discrimination against American Muslims does happen. It’d be a mistake to pit the rights of Muslims and the LGBT community against each other. If we become selective in protecting human rights, then we are simply failing to protect the rights of all people.