Especially the girls, you know? 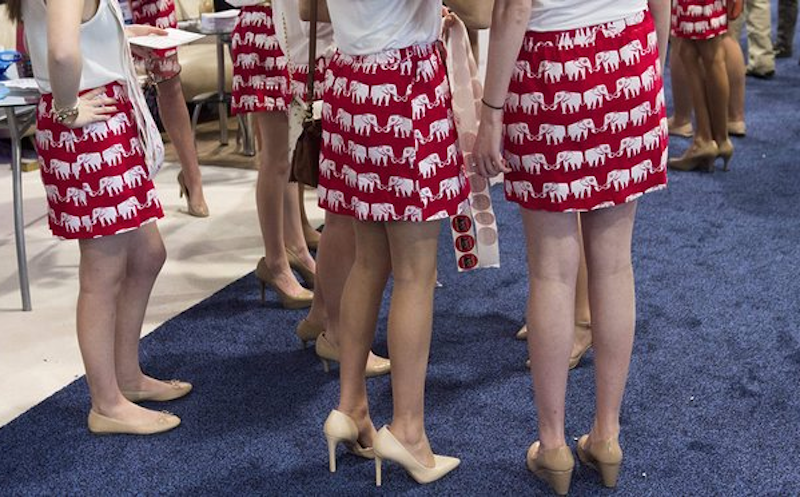 Ideologues can mess up anything. One of my fellow geezers finds himself in a room stocked with pleasant girls under 30. What does he do? He writes a column about conservatism and how great it is. The young people in question (there were boys too) had turned out for the Conservative Political Action Conference. Surely there had to be a connection between the event at hand and the somersaults in his wrinkled heart. The geezer’s column considers the possible links and settles on this: “It’s not that a lot of attractive women, for some reason, find their way to conservative views; it’s that something about holding conservative views causes women—all women, across the spectrum—to become particularly attractive.”

Imagine that, to look upon young humans in bloom and decide that the glow comes from their political views. The writer figures that rejecting the left allows the girls to be as their creator intended. He puts it quite well, I think: “Maybe what I’m noticing is simply women who have been liberated by their worldview to be who they are, uniquely and confidently, unabashedly and apologetically, unencumbered by the politically correct constraints imposed on women of the Left, and the result is a kind of essential womanhood that, far from being oppressive, as the Left would have it, is instead, miraculous and quintessential, and, you could say, God-given.” Still, I’m dubious.

Elements of the left sing a similar song. The established order is anti-life. Humans are alienated from themselves by capitalism and patriarchy. Therefore, some combination of admiring Che, dropping LSD and avoiding office work allows the true self to emerge with bright eyes and an integrated spirit. The New Left pursued this dream and Marge Piercy wrote it up in her throbbing novels of young people getting transplendent. A couple of these books were corkers, and I’ve certainly met some bouncy left-wing backpackers chasing their tails across the Third World. But the gentleman at CPAC encountered radiant young women freed to be themselves by Phyllis Schlafly, or at least the absence from their lives of those who disagree with Schlafly. Who’s right? Who’s been liberated here? My advice: sit down a while and then think about something else.

I suppose liberals and centrists (I insist on that distinction) can be as pleased with themselves as lefties and right-wingers. Come on, of course they can. Liberals in mid-argument roll their eyes and crimp up their lips. Centrists give sing-song lectures about avoiding extremes of left and right, as if the point of living were not to tip over. But they don’t think they’re heroic. You don’t find liberals dressing up in combat boots and keffiyehs. You don’t find adherents of No Labels describing their kind as warriors. But dig our man at CPAC on the young people around him, “all of whom seem to be warriors for the cause, possessing an inchoate nobility and clear courage that might serve as nothing less than the lifeblood of a better future.” That’s a hell of a way to talk about people wearing nametags.

Going to my favorite coffee shop, I used to see high-spirited, hard-working, merry young chaps and ladies doing a fine job and doing it with a smile. Not all the kids, but most, and I miss seeing them now that I don’t go. Maybe these particular kids had avoided exposure to anti-patriarchal ideas. Maybe they’d been set loose from capitalism’s grid and were operating undercover to free the rest of us. Maybe that particular chain of coffee shops had a corporate philosophy so potent it unleashed the employees’ inner potential. Or maybe human beings are like pennies: after prolonged use they lose their shine, but everyone notices that shine while it’s there. No, that last one isn’t much of an idea. But I bet it’s true.