Some Johnson in Your Mitt 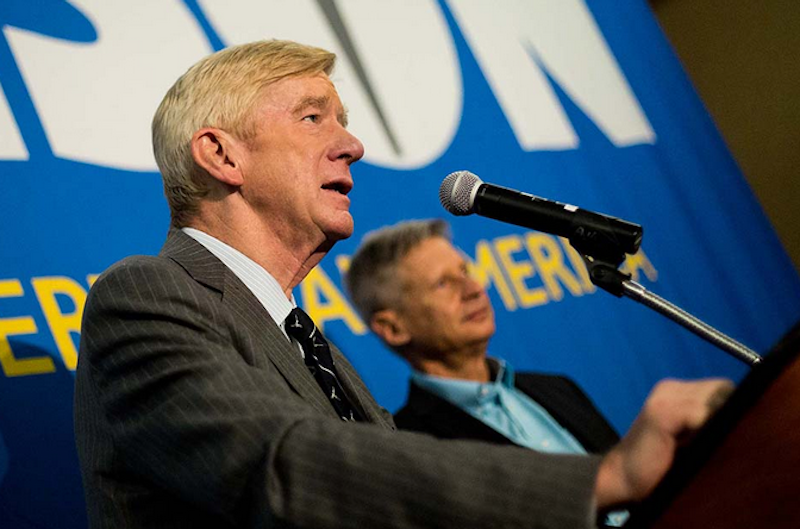 Mitt Romney said he’s contemplating voting for the Gary Johnson/Bill Weld ticket the Libertarian Party is offering in November (as was noted by the site LibertarianRepublic, founded by one of Johnson’s former rivals for the LP nomination, Austin Petersen).

Some on the left will react by saying this proves the Libertarians offer nothing more than a “Republican lite” option. Some conservatives and hardcore libertarians will similarly say with disgust that Romney was never anything but a Progressive, and this is just an attempt to restore the East Coast’s Rockefeller Republican establishment of decades past—a “Prog-Rock” fusion, if you will, pleasing only to a few soulless Kasich supporters in Manhattan.

I say, look at one potential big-picture scenario here: lots of vaguely free-market types following Romney’s lead. If you’re bothering to vote at all, you’re presumably not making a perfect one-time statement of principles but rather indicating what sort of real-world, long-term ripple effects you’d like to see in people’s political decision-making. It’s fantastic if you’re indicating that you’d like to see government completely abolished, but that doesn’t preclude sending the signal that as a means to that end you’d like to see a strategic realignment in politics. You’re certainly going to need one.

Would a new, more libertarian East Coast establishment be such a bad move in this game?

As a New Englander who knows full well how shamefully Democratic my homeland has been in recent decades, but also knows there is an American Revolutionary past there without which there’d likely be no limited-government constitutionalism in this world—not to mention no Tea Party imitators a couple centuries later—I’d be delighted to see the capitalists, brainiacs, anti-government revolutionaries, and people of a sane and moderate temperament start to recall, however dimly, that they all ought to be working together.

One long-term strategic reason I was rooting for Rand Paul in the Republican primaries was the recognition that he was capable of doing some outreach to the religious that some libertarians can’t. One needs allies, after all. But, hey, there are avenues of cultural engagement other than the road to the nearest mega-church. A Northeasterner like me certainly wouldn’t turn his nose up if a big shift toward the Libertarians occurred among the secular, educated, and rich. We’ll take ’em, even if they too need further education in the philosophy. Some of those Unitarians in the North are surprisingly educable, you know.

Meanwhile, the angry Trump populists can wrestle with reconciling claims such as that their man is about to deliver a deathblow to the establishment conspiracy even as one of his most prominent fans, Peter Thiel, follows up his announced plan to be a Trump convention delegate with an appearance at the dreaded establishment confab called the Bilderberg convention.

See, it doesn’t offend me that he was there, but then, I’m the one admitting that it’s very useful to steer the establishment when you can. There were populists a century ago, too, but the elite were busy molding academia, media, government, radical movements, and finance. If you can’t do something strategically useful with a chance to exert similar influence, maybe you aren’t really trying. Maybe you don’t want to win. I think there might be a chance here, however small, to do Prog-Rock far, far better than the stuff they had back in the 1970s.