The Unknown Bumps Up Trump

A vote for Brexit is a Clinton headache. 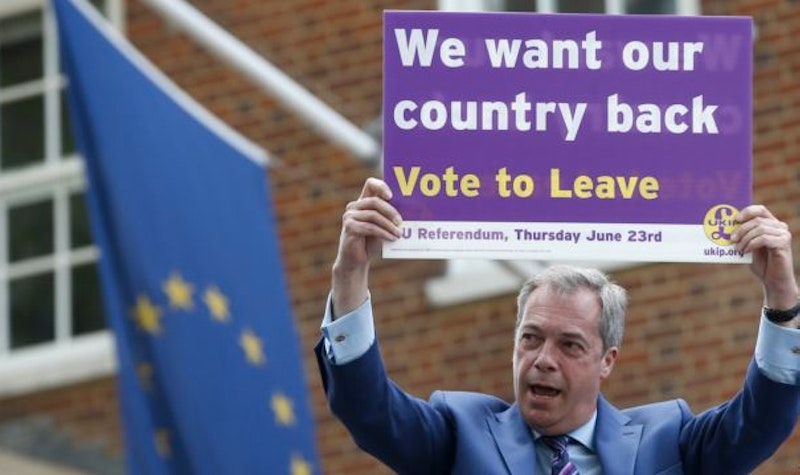 I noticed on Twitter yesterday morning several people relishing the results of the latest presidential SurveyUSA poll for very conservative Utah, which showed Hillary Clinton and Donald Trump tied, each with 35 percent. Never mind that it’s fairly absurd to take any poll seriously five months before the election, that’s lost on Clinton supporters. They take any scrap on offer. The larger picture is Democrats, and some permanent government Republicans (who are wavering), are terrified that Trump could actually win. (For the record, I loathe both candidates, and hope, most likely in vain, that the Libertarian ticket of Gary Johnson/Bill Weld takes off like a Roman candle.)

Have reporters and commentators learned nothing in the past year? Trump, by conventional standards, should’ve been chucked into the Herman Cain trash can about 100 times by now, considering all his crude and self-aggrandizing remarks, most delivered with the syntax and lack of sophistication of an ADHD school boy. What makes the Beltway crowd so confident that now that the primaries are over voters will do the right thing and vote for Clinton? Surely no one believes Trump pulling the credentials of Washington Post reporters will have any backlash, right? Why is there this notion that the mass media, which feasted economically during the GOP primary, will abandon the bottom line and limit its Trump airtime? Seriously, presidents come and go, but television companies fight economic peaks and (mostly) valleys every quarter. It’s not in their interest to go the equal airtime route.

Pre-Orlando, I read a fine column in The New York Sun (now just online, unfortunately) by the invaluable Seth Lipsky, who connected the real possibility that the UK on June 23rd will vote to leave the European Union—Brexit—with the populist appeal of Trump in America. (That Trump, an entitled, crass celebrity resonates with lower-income whites is still baffling, but is of a piece with this fantasy-sports election, where the Democrats have embraced Clinton, under FBI investigation and with a long but hollow resume.) Lipsky traces the rise of Brexit with Barack Obama’s “shocking act of interference in the internal affairs of an ally,” when earlier this year the President said in London that voters should reject Brexit, and warned that if his advice wasn’t heeded, Britain would have a more difficult time making trade deals with America. Back of the bus, mates, last in the queue. Clinton echoed Obama, while Trump said, “I would say that they’re better off without it [EU], personally… but I’m not making that as a recommendation.” A Brexit win will roil global markets—however temporary is anybody’s guess—and that, too, is to Trump’s advantage.

Left unsaid in Lipsky’s column was another similarity between the Brexit campaign and Trump supporters: immigration. As noted countless times in this space, I’m pro-immigration, which leaves me in the corner with a minority of Americans, and I find all of Trump’s pandering blather about walls and deportations especially vile. Of course, the Democrats aren’t much better on immigration reform, but they’ve been given cover by the increasingly Nativist wing of the GOP (which includes so many moral high horse #NeverTrump adherents, who preferred Ted Cruz, more of a Xenophobe than Trump). In the jumble of Brexit polls, what’s fascinating is that it’s the younger voters who favor Remain, while those in middle age and beyond prefer Leave, and in the latter case, a lot of that’s ascribed to anti-immigration, a common thread in Europe today.

The preponderance of political correctness isn’t, of course, unique to American culture today. Conservatives and moderates alike lampoon Prime Minister David Cameron’s walk-on-eggshells mentality in Britain, as his groveling at the altar of multiculturalism is perceived as weakness. Some say that just a year after Cameron lead the Conservative Party to a smashing win over Labour—once again, the polls got that all wrong—if Britain votes to leave the EU, he could be finished. Perhaps in favor of that aging rapscallion Boris Johnson. Then again, Brexit is more a ferocious opponent than the hapless Ed Miliband.

It’s too early—and politically unseemly—to figure out how the atrocity of the Orlando massacre plays, and neither Trump nor Clinton has acquitted themselves well on the rushed statements they’ve issued to media jackals. But ultimately, their words are unimportant compared to the renewed layer of fear in the U.S. today, and that doesn’t favor the status quo. Going forward, we know it’d take something so salacious, so tawdry to knock Trump down like any other candidate, since he’s already traversed that road. Proof that he’s a pedophile? Yes, I think that’d do it, but not much else.

And that’s what the Beltway insiders don’t get: Trump is merely a vessel for a large segment of the population’s discontent. The repulsive nature of the man is nearly irrelevant: Brexit, the inevitable next Orlando, an economic downturn, all of that works to the Republican’s favor. That’s why this election is such an outlier. Calm waters ahead and Clinton’s the first woman president. Chaos, and she goes back to giving speeches for $500,000 a pop. I’ve dismissed predictions of violence at the conventions in Cleveland and Philadelphia—it’s just hard to conceive that anxious as America is today, it compares to 1968—but now, I’ll admit I’m in the dark.