I Held Hands With a Trump Supporter

Sparsely attended rally in Richmond leaves a feeling of depression. 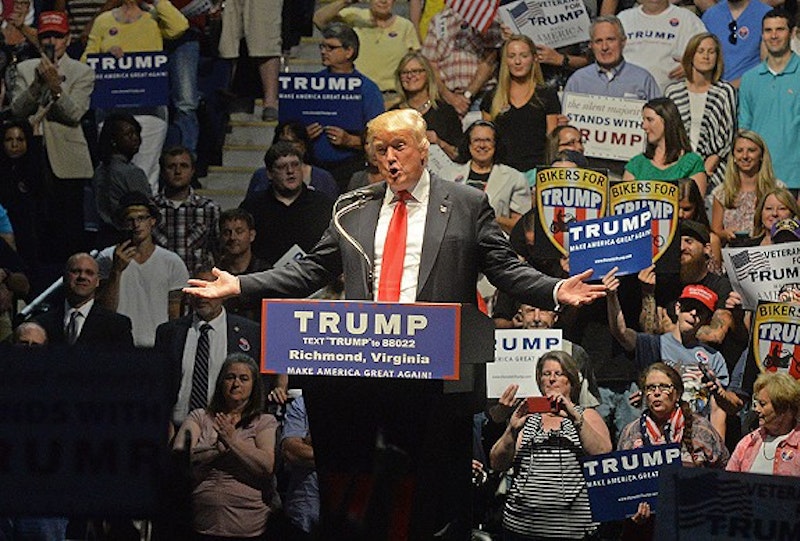 I parked my car a few blocks away from the Richmond Coliseum on Friday evening and headed to the Trump rally. Spotting two guys selling Trump merchandise on the street, I stopped for a look. One of them, who looked like a typical street bum, quickly took a couple steps away, turned his back and started retching. When he returned, I tried to get him to pose for a photo with the Trump paraphernalia, and it would’ve made for a great shot, but he declined. I asked his partner how to get to the event. "How do you get there?" he asked, as if it were an odd question.

The police presence was heavier than I'd ever witnessed. At the gate, I couldn't get my electronic ticket to come up on my phone. The tall, imposing man in an expensive suit (either Secret Service or a Trump operative) asked if I was a Trump supporter, and I assured him I was. He looked at me skeptically, but waved me through.

Neil Young's "Keep on Rockin' in the Free World" was playing on the PA system, and then the Rolling Stones "Let's Spend The Night Together." Both Young and Keith Richards despise Trump, and wouldn’t have approved. The atmosphere was reminiscent of a county fair, and that's how people were dressed, except for a handful of well-coiffed, manicured Republican women. One stereotype of his fans is that they're unlettered peckerwoods, but that's too simplistic. The crowd was mixed, including black people, biker types, and some college kids. People wore t-shirts with amusing messages. "Hillary For Prison 2016" was my favorite.

I put the Trump sticker on my shirt. The plan was to go down on the floor and blend in with the other Trump fans. A hype man was speaking. A right-wing talk radio host spoke of "Mr. Trump," adding that there were more people in the Richmond Coliseum than there had been in years. The place was maybe a quarter full.

A black Baptist preacher came onstage and told everyone that blacks are finally going to vote Republican in 2016. He instructed us to hold hands while we prayed together. Wanting no part of this, I stared straight ahead, but in my peripheral vision I spotted a hand on my left side being extended to me. It belonged to a tall, country-looking, huge pot-bellied man who looked at me earnestly. I was stuck now. Reluctantly taking his hand in mine, I listened to the preacher, hoping he'd be brief. The preacher, loving his own voice, did not oblige. The Goliath tightened and relaxed his grip several times as the preacher spoke, and also moved a few of his fingers.

There were a number of preliminary speakers warming up the crowd before the Great One arrived. Periodic chants of "Trump, Trump, Trump!" and "U.S.A!" broke out, and mentioning Hillary Clinton got loud boos. When their idol finally arrived, the crowd erupted. I was afraid he was going to use a teleprompter, but he winged it, detailing all his primary victories and the times he'd been on the cover of Time magazine. Trump spent a lot of time talking about Bobby Knight, and then mentioned all the other sports stars who love him, including Tom Brady and Ben Roethlisberger. Trump spoke of having a new kind of convention in Cleveland this year. All the great sports people who love him would gather there. He'd call it "winners evening."

That was about the only new material Trump had this evening. He loves China, like he loves everyone, but he's going to slap a 35 percent tariff on their goods. Jobs will come back come and they'll soon be opening plants in Richmond. Hillary wants to raise taxes on everyone, but Trump will lower them, because we are the "highest taxed country in the world." Hillary hates the Second Amendment and wants to take our guns.

When Trump got to Common Core, I'd had enough. Trump makes my skin crawl. He's comfortable at the microphone, but his speech bored me. I thought about how much Trump resembles Venezuela's Hugo Chavez, who also once had his own TV show and spoke comfortably to the masses. They're both populist demagogues. I don't know if Americans, under Trump, would end up carrying backpacks full of cash around town to pay for things, but I get a bad feeling when I think about it.