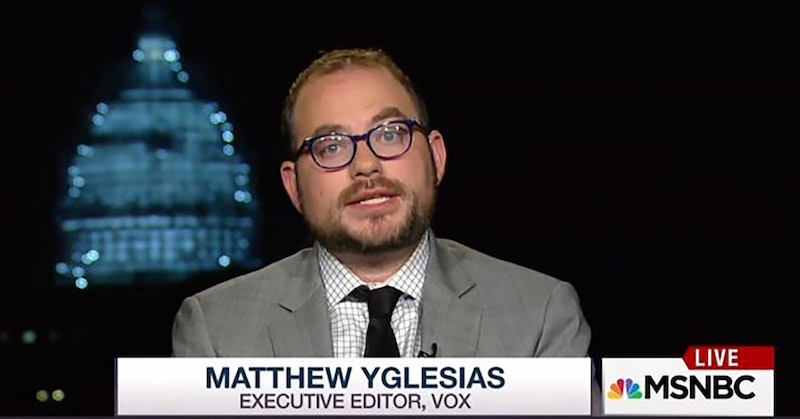 For the past 40 years, politicians have had only one position on crime. They’ve been "tough" on it. The bipartisan, virtually universal grandstanding in favor of more law enforcement has led to our current regime of mass incarceration. It's also enabled the systematic police brutality and abuse exposed by the Black Lives Matter movement.

It's only very recently that Democratic politicians and voters, pushed by activists, have begun to question this consensus. Law and order still has many proponents, though, as Matt Yglesias demonstrates in a recent article at Vox.

Yglesias worries that Democrats are abandoning the tough on crime position to Republicans, and recommends course correcting. He says Democrats should push for federal funds to put more police on the streets.

In making this argument, Yglesias reproduces the logic that has led us to our current law enforcement cesspool of racism and injustice. Rather than re-embracing policing, Democrats can show they care about crime by putting money into social services, starved by government obsession with law enforcement solutions.

Yglesias goes further and argues that more cops will reduce harassment and use of force. He points to studies showing that cops are more likely to commit use of force violations after they've done overtime; i.e., when they are overstretched. Adding more cops, he argues, will reduce the need for overtime. That argument seems logical, though Yglesias doesn't have any particular studies to back it up.

Yglesias acknowledges that in New York, more officers on the street led to more stop and frisk incidents without probable cause. Yglesias says those incidents had nothing to do with crime reduction, though. So you could in theory bump up police presence, institute less racist and invasive practices, and end with more crime reduction.

To ensure that more police behave better, Yglesias suggests that federal funds for more policing could be predicated on reform of police procedures. That's a nice thought. But in practice, how likely is it?

Once Democrats embrace more policing as a good in itself, reform measures become a bonus good. Yglesias acknowledges that a major goal of pushing more funds for police is to win over swing voters. That means Democrats who embrace this policy would be eager to attract bipartisan support. It's inevitable that Republicans will love putting cops on the streets, and balk at the reform demands.  Democrats can then jettison those reforms, since reform was never the main point of the proposal in the first place. The result will simply be more cops on the street following the same script of racist harassment.

As Yglesias' outlet Vox itself reports, slashing of mental health services nationwide has led to police called more often for mental health crises. The result has been an "epidemic of police shootings of people with mental illness." Almost 500 people with mental illness were shot and killed in 2015 and 2016 that doesn't count individuals who were shot or beaten but didn't die.

Similarly, a huge boost in police officers in schools has led to increased suspensions and harassment of students of color but not more safety or better educational outcomes. Meanwhile, many public schools can't afford new textbooks or safe buildings.

Kevin Drum has argued that we could reduce crime substantially by investing in lead abatement. Environmental lead causes brain damage that can cause more violence. Various studies have shown that reducing lead also results in a drop in crime. Investing in lead abatement would create jobs in inner city areas, and would improve and shore up housing. It also wouldn't risk an increase in police harassment and brutality.

In theory, you could pay for both more police and more services. In practice, over the past decades law enforcement has effectively been used to replace other spending, concentrating social service functions in the hands of inadequately trained, and often racist police personnel.

This is why activists have desperately tried to push politicians to shift funds away from police, and towards less dangerous solutions. In Chicago, for example, where Mayor Rahm Emanuel has gutted schools and mental health services, the city has proposed a $95 million police and fire training center. Activists have responded by pointing out that these funds could be used in much more productive ways. As Chance the Rapper said in a city council meeting, "There’s a lot of different ways to transform the city that don’t have anything to do with police training."

We're just beginning to explore those different ways, in part because we're now acknowledging how harmful it is to treat policing and incarceration as the solution to all our social ills. Yet Yglesias sees even those tentative moves away from policing as dangerous, and calls for a return to the 1990s politics of law and order to cater to the right.

Those policies resulted mass incarceration. It also got us the current administration, in which the President defends the torture of children on the grounds that people of color spread crime. It's time we finally realize there are ways to make our society better that don't involve more uniforms and more guns.