The media's too full of itself to admit its coverage was execrable. 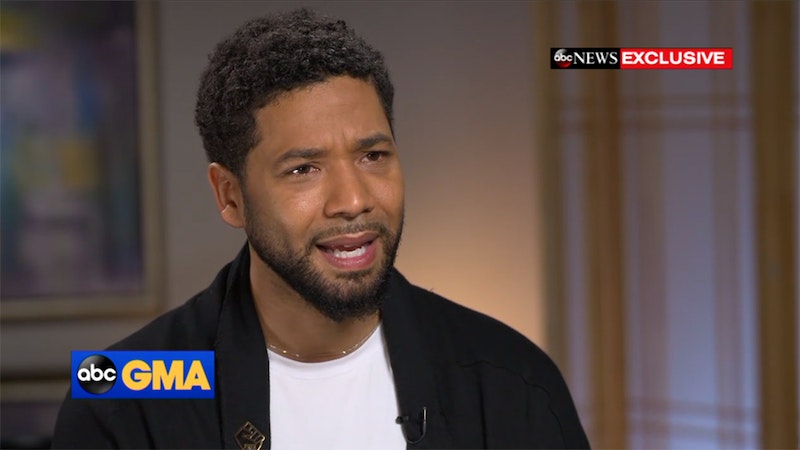 CNN’s Brian Stelter, allegedly the cable channel’s ombudsman, has assessed the media's handling of the Jussie Smollett “hate crime,” and he's fine with it. "There was a rush to judgment,” he said on his Sunday morning show. “I think it was mostly in the celebrity press and among activists and among Twitter people. I think it was a really careful reporting by news organizations. But it all gets lumped in together at the end of the day.”

This is after his CNN colleague, Brooke Baldwin, had said of the alleged attack, “This is America in 2019” and “Absolutely despicable,” without looking at one police report or a single photo. In another time, such reckless editorializing would’ve been considered unprofessional. These days it could be called—God forbid!—fake news, but we all know using that phrase puts democracy in danger and offends our heroic journalists.

So TMZ and Kathy Griffin are getting lumped in with prestige media like The Washington Post? Maybe that's because WaPo’s Global Opinion Editor, Karen Attiah, tweeted this: “Regarding the heinous attack on @JussieSmollett, yet another reminder that Trump’s ascendance and the resulting climate of hate has meant that lives have been increasingly at stake since 2015. Smollett could have been killed by those thugs screaming MAGA. Let that sink in.” “Could have” been killed? His injuries were minor.

Maybe Stelter also missed what Senior Editor for Rolling Stone, Riddhi Chakraborty, reported on the incident: “Empire’s Jussie Smollett was violently assaulted in Chicago by 2 men yelling racial & homophobic slurs. They dumped an unknown chemical on him, stated ‘This is a MAGA country’ & wrapped a noose around his neck. They were trying to lynch him for being an LGBTQ+ person of colour.”

GQ weighed in: “The Racist Homophobic Attack on Jussie Smollett Is Far-Right America’s Endgame,” for an article focusing on “whiteness.” It's now looking like the “attackers” were two black guys paid by Smollett, but the article remains online.

That's just a small sample of the misinformation “respectable” and “careful” journalists were spreading after Smollett went public with the accusation that two Trump fans had attacked him while yelling “This is MAGA country, nigger,” which Chicago isn’t. The assailants, who just happened to be carrying bleach and a noose at two a.m. on the coldest night there in decades, recognized and then jumped the Empire star (a program few Trump fans watch), an act none of the area surveillance cameras picked up. But the actor still had the presence of mind to pick up his Subway sandwich before returning home with the noose around his neck. Were he not now headed towards an arrest, Smollett could be looking at a lucrative Subway endorsement.

Brian Stelter thinks the media did a good job even though he saw Smollett’s dramatic, emotional appearance on ABC’s Good Morning America. The story smelled from the beginning, but host Robin Roberts allowed the actor/musician free rein to use his thespian skills for self-promotion. Smollett said he was attacked because he was a Trump-basher. “I come really hard at 45,” he told Roberts, adding, “I punched his ass back.”

As of Sunday, Stelter was in Phase Four of the media/politician/celeb/woke Twitter reaction cycle to the latest faux outrage story. The same pattern played out just a few weeks ago with the Covington High School travesty. Phase One is an outpouring of outrage from the Left, which is an easy mark for any sort supporting a narrative that the Trump phenomenon’s produced jackbooted, Clockwork Orange-style gangs roaming streets in search of blacks or gays to stomp. Presidential contenders Kamala Harris and Corey Booker both called the attack a “lynching.” When Booker was asked about this days later, he said he was waiting for the facts to come in.

Phase Two kicks in as conservatives recognize the pattern and start poking holes in the story that progressives are blind to. This is what trained journalists used to do when there were still standards—before journalists became cheerleaders for a cause.

In Phase Three, facts start to trickle out. Embarrassed liberals get quiet, while the conservatives get louder. Because the media’s too timid to do its job by remaining skeptical, it now has to wait for the police to confirm what were obvious inconsistencies in Smollett’s story from day one.

Phase Four is the gaslighting stage that Brian Stelter's in. He said the bottom line’s that this mess is all Smollett's fault, as if the easily-duped media volunteering as his bullhorn wasn't relevant. Stelter's self-serving denial brings to mind the Marx Brothers movie, Duck Soup, when Chico said to a woman, “Who are you going to believe, me or your eyes?”

Phase Five is the rehabilitation of Smollett. You'll hear people talking about how the story, while not technically true, still represents reality in Trump's America. Some will invoke Alexandria Ocasio-Cortez’s concept of “moral truth” over factual truth.

Progressives don't want to vilify Smollett because, regardless of what happened, he's still in a protected group. The current political landscape is not defined by principles, but rather by which narrative you promote. The progressive narrative is that the streets aren’t safe for minorities in the Trump era. To question that orthodoxy by criticizing Smollett could be seen as act of disloyalty or even racism by the Left. You're much better off claiming, as actress Ellen Page did on Stephen Colbert’s show, that Mike Pence caused the attack. The fact that the video of the interview has had over 18 million views demonstrates how impervious the chosen story is to facts.