Intel Will Pick the Next President

Not fundraising, likability, or demographics. Surveillance. 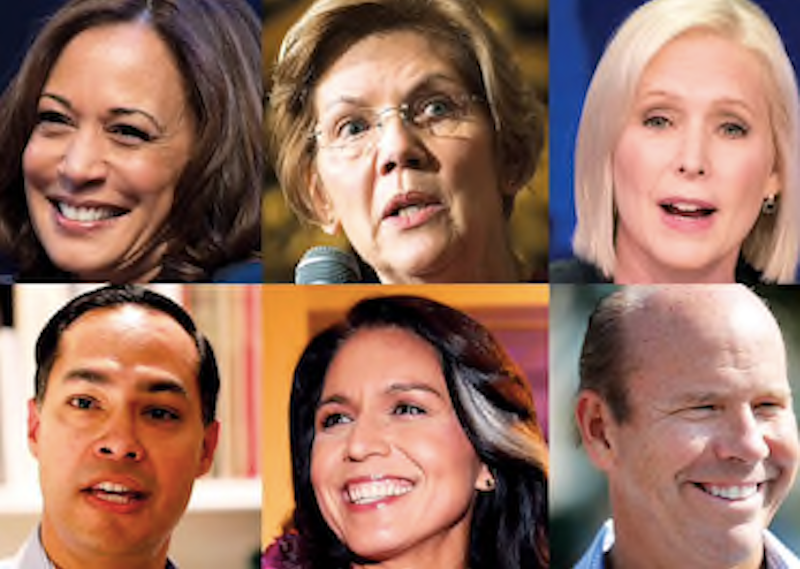 As we gear up for 2020, there’s great emphasis on who had the best launch, who can raise the most money, who belongs to which demographic group, and whether Amy Klobuchar should endorse Medicare for all. Which of the countless candidates, ask anxious voters, is most electable? But electability this time around is likely to turn on who has least offended "the American intelligence community." If you had a clear notion of who that was, you'd have identified the next president of the United States.

Here's something we should be asking, but which nobody seems to: What sort of surveillance, direct or indirect, have the FBI and other intelligence agencies got on Kirsten Gillibrand, Kamala Harris, Corey Booker, Elizabeth Warren? They have some on all these people (as well as the biggest intel file in human history on Donald Trump & co.). That’s likely to give them the power to select the next president of the United States. And for our own good as they see it, they’re likely to do just that. Instead of thinking about how far left to float this week, the candidates should be concentrating on placating Gina Haspel. Those who don't aren’t electable next year.

People somehow missed the big, obvious lesson of 2016. The FBI was all over the communications of both candidates. Obama-Bush-era intel officials (as well as CNN anchors) spent a long time being disingenuously outraged at the very assertion that Trump was under surveillance in 2016. They've quieted down on that because nothing could be more obvious than that they were watching Trump and his campaign from a number of angles simultaneously. And as the election approached, they were rummaging through Hillary Clinton's emails, again, this time on Anthony Weiner's computer. They didn't need direct warrants against the candidates or campaigns to do any of that.

And perhaps the intelligence establishment did decide the 2016 election, as Comey blundered his way through various miserably-timed announcements on Clinton, appearing to exonerate her in the summer even as he slammed her carelessness in using an unsecure email server as Secretary of State. Then he brought up the name “Anthony Weiner” and dragged Hillary's emails back in, a week before the election. But if intel officials decided the election, they did it accidentally, just by blundering around through everyone's communications. I can't imagine that Comey, McCabe and co. wanted Trump to win. They were bewildered and confused as to how to proceed with all the material they had on both candidates; they made decisions piecemeal, chaotically. But Trump’s been a complete disaster from the point of view of the intelligence establishment. They could’ve taken him out before the election. They waited until after, probably because they didn’t expect him to win. They won't make that mistake again.

It's very unlikely that there's a FISA warrant on Tulsi Gabbard, for example. But intel agencies have access to a range of her communications. When Gabbard was touring Syria and Lebanon in 2017, she unexpectedly was offered a meeting with Bashar al-Assad (and was politically unwise enough to take that meeting). It was arranged by a pro-Assad Lebanese political party, apparently through Arab-American intermediaries (Gabbard later reimbursed the travel expenses). Now, if you’re the head of an Arab-American community organization in Ohio that is funded by a pro-Assad Lebanese political party (the person in question is named Bessem Kharam, the organization the Arab American Community Center for Economic and Social Services) you’re under CIA surveillance. And when you start approaching members of Congress, they're liable to FISA you immediately. (And of course, they’re doing their best to monitor the communications of Assad and people around him.) In short, it's very likely that they have a legally obtained trove of information on Gabbard. It's possible that they also have leverage over Gabbard and that, if it became an urgent matter as they saw it, they could effectively end her candidacy with leaks or merely by announcing an investigation.

This is a terrible dilemma for us all and for American democracy. It's not that the FBI didn't have good reasons to track Trump, and it remains an open question whether he has been compromised by Russian intelligence. It's hard to imagine a more urgent matter, though it seemed less urgent when it seemed almost impossible that Trump could win. And there’s certainly a nest of international criminal corruption all around the man, in the forms of Michael Cohen, Roger Stone, and Paul Manafort, for example. I see why they took the approach they did. (It's a little harder to make this case on Clinton.) The fact remains that they had a rich trove of compromising information on a major party candidate. That's what can be used to pick or eliminate presidents. Even a decent establishment-minded intel official (a Peter Strzok type, maybe, still embedded), or dozens of them, might conceive it to be their duty to keep someone like Trump from being elected again or specifically to keep him from being re-elected in 2020. I don't think he can be re-elected, for precisely that reason. These considerations indicate that our hypothetical official and his people will need to track not only Trump, but every viable candidate.

I'm not really into trying to rummage their schedules, but it's likely that every Senator who’s running for president has come into contact with people who are under active surveillance. For example, Elizabeth Warren and Kirsten Gillibrand have run into Sergey Kislyak, the Russian ambassador with whom a number of Trump campaign, transition, and administration figures—including Jeff Sessions and Jared Kushner—engaged in semi-clandestine meetings where they discussed sanctions relief. Or have any of these people found themselves at a party or taking a meeting with a Russian oligarch, for example? Or with someone who is associated with a Russian oligarch? Or for that matter with a Chinese-American constituent who turns out to have some connections with the Chinese government? The routine activities of US Senators will edge their communications into the surveillance category.

Even a completely politically neutral and patriotic intelligence official could be excused for thinking that they better pay close attention to presidential candidates. Anything else, they might come to believe, is irresponsible, because not doing this in a systematic way led us to the Trump disaster. Maybe Trump is actually working against America's security interests. But more to the point, he’s insulting and undermining the intelligence community all the time. If you were an Andrew McCabe-type still in the hierarchy, for example, you'd owe it to your country and your agency to see what we have on Corey Booker.

Part of this is not really a matter of decision. They already have some, or a lot, of material on all the candidates. It's liable to leak from them anyway. The candidates are likely to have a sense that intel has some of their communications, and so I think we’ll hear little direct criticism of the intelligence services from any of them. And the intel agencies have got to see that the way they affected the 2016 election shows that they can control the outcome if they want. They may conceive it as their patriotic duty to do so.

In other words, if they want to, they can control American politics. Trump gives them reason to want to. But then electoral democracy becomes a sort of scrim over the real power, generated by surveillance. I'm not saying that any of the 2016-cycle surveillance was directly illegal or even unjustified for security reasons. What I'm saying is that it amounts to an intelligence coup, and that we're going to see whole new rounds of evidence for that as November 2020 approaches.