#PuppetGate and the Celebration of Ableism 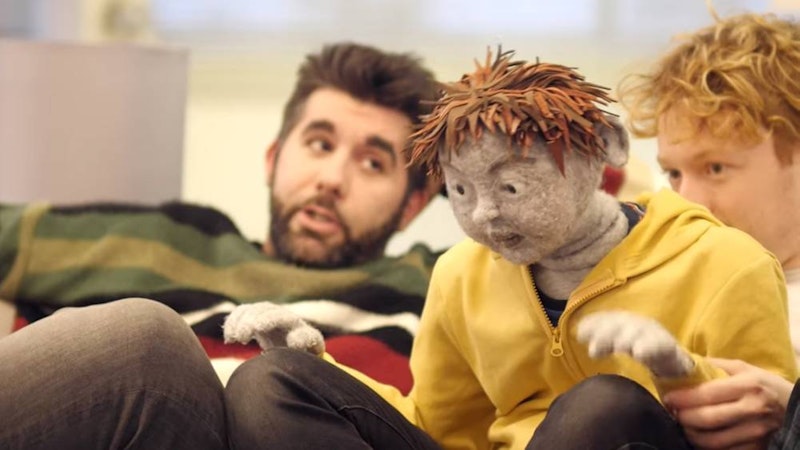 My girlfriend looks up from the phone, showing me a ghoulish puppet with gray skin. She asks, “Is that what they [neurotypicals] think of me?” I want to tell her no, but can’t. My own experience proves otherwise: I've spent a lot of time dealing with ableist attitudes and assumptions in every facet of my life. A significant part of my emotional energy is spent “masking,” altering my behavior to conform to neurotypical standards. I remain vigilant and assume that people think negatively about me in secret, because it's happened before.

This is about #PuppetGate, a hashtag formed by #ActuallyAutistic Twitter in response to the UK play All in a Row. The puppet is the autistic boy, whereas live actors play the other members of the family. The script indulges in ableist tropes without question or clever subversion. Shaun May, a Senior Lecturer in Drama and Theatre, reviewed the play's most egregious offenses on his blog. The autistic community has organized a boycott of the play, but the damage has already been done.

Often, stories with autistic people in them aren't really about them. Instead, it's about the struggle of the parents. In fiction, as in real life, it's the parents who get the attention and resources. Few people acknowledge that there's a wide gulf between parents and autistic adults, who criticize harmful parenting practices and damaging “treatments” such as Applied Behavior Analysis. Autism Speaks is still routinely sponsoring autism-related events and companies ally with them despite the fact that the autistic community is vehemently opposed. We still have autism martyr parents filling up social media with videos of meltdowns they recorded without consent, or writing books that divulge personal details of their children and receiving praise for it. The blue puzzle piece emoji was clearly made with zero input from autistic people.

I have to couch my language to appeal to these parents, I must give them more charity than they’d ever give in return. “Yes, you built a sensory hellscape for your autistic family member, but I'm sure you had the best of intentions!” “Yes, your autistic sibling wants to express creativity through the special interest that you’re denying, but you want them to be productive after all!” “Yes, your autistic adult child is losing out on important developmental milestones due to gatekeeping, but I'm sure that's just because you're worried!” The words, “I mean well” can cover anything.

Efforts are made to excuse, downplay, or ignore anything that could negatively impact someone autistic. The onus is always on the autistic person to fit into a world that isn't made for them. People with enormous talent and potential slip through the cracks. It's exhausting explaining neurodiversity at a 101 level, especially to people who show no interest in modifying their behavior.

But if there's positive outcome of #PuppetGate, it's that this blew up on social media. What was previously confined to more private platforms is part of public discourse. I can point to this as a visible example of how ableism works in our culture. That probably won't stop the parade of martyr parents who’ll no doubt praise it, since it goes out of its way to validate them. But I wonder when we'll get a play that’s about how hard it is to be autistic in a world where this kind of treatment is the norm.