It’s easy for the affluent to dispense advice to their perceived moral inferiors. 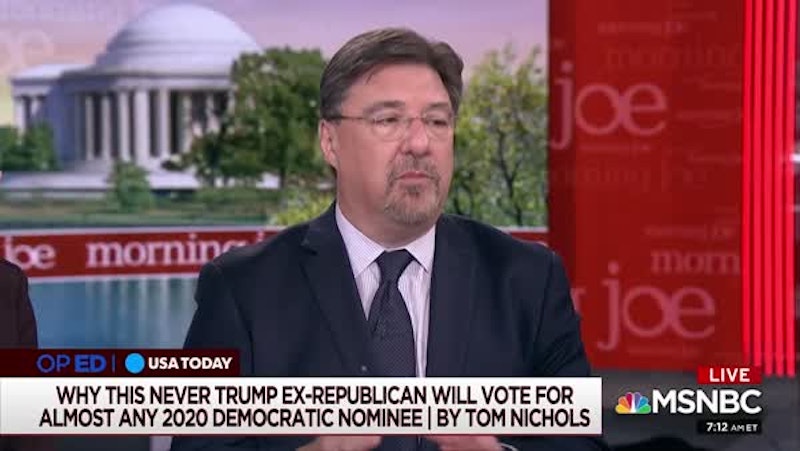 The rumpus over Donald Trump’s made-for-parody daily press conferences about COVID-19 has continued far longer than necessary. It’s true, as The Wall Street Journal editorialized last week, that Trump rambles on too long, settles real or imagined scores (mostly with the media) and is less than dignified when addressing the worst health crisis of the modern age. This isn’t new, and besides, has anyone ever accused Trump of possessing even a dust particle of dignity? The Journal was rewarded with a “Fake News” tweet from the President, which he hands out like mini-Milky Ways on a busy Halloween evening.

I don’t watch the briefings, just as I don’t watch cable TV or, except on rare occasions, read The Washington Post, Huffington Post, The Federalist or Breitbart. It’s easy enough to find out the two minutes of pertinent information dispensed by Anthony Fauci, or even Trump himself. Why masochists subject themselves to 90 minutes of one more Trump ego-gratification show is beyond me, but as has been the case since 2015 the media won’t sacrifice ratings, and nuggets for occasionally thoughtful but more often scabrous essays, and that’s not confusing at all.

As I’ve written previously, the Trump administration is like a daily Super Bowl for journalists—like tornados, blizzards and hurricanes for weather forecasters—and if you believe that the elite media, the high-salaried survivors, aren’t privately hoping for another Trump term, you’re living in a naïve world of your own.

I understand The Atlantic’s website publishes non-stop—and though I doubt many read the printed monthly magazine, give the owners credit for not pulling a Vox Media (capitalized at over half a billion) and begging for reader donations—but the quality control is nearly non-existent. It’s a haven, a safe space, for #NeverTrumpers to repeat what they’ve written since early-2016 when it was clear Trump had a chance of winning the Republican nomination, but with one more new angle. Granted, Trump is a goldmine for these exhibitionists, but in a rational world you’d think an editor would say, “Stop…”

Perhaps the worst offender is Tom Nichols, a 59-year-old former Republican flipped independent, whose self-righteousness is every bit as loathsome as Trump’s vicious frivolity. (In a feat worthy of Houdini, he surpasses onetime let’s-bomb-the-shit-out-of-Iran #NeverTrumpers Max Boot and David Frum for chest-thumping.) Nichols, with his approximately 352,000 Twitter followers, rivals Trump for using that platform.

In The Atlantic last week, Nichols wrote: “In his daily coronavirus briefings, Trump lumbers to the podium and pulls us into his world: detached from reality, unable to feel any emotions but anger and paranoia. Each time we watch, Trump’s spiritual poverty increases our own, because for the duration of these performances, we are forced to live in the same agitated, immediate state that envelops him… Trump’s spiritual poverty is making all of us into worse people. We must recover this in ourselves, and become more decent, more reflective, and more stoic—before Trump sends us into a hole from which we might never emerge.”

What the fuck is Nichols trying to say?

How presumptuous for an affluent academic/author/Thought Leader/Resistance General to make the claim that Trump is “making all of us into worse people.” Speak for yourself, bub: the vast majority of Americans, those who despise Trump and those who support him, don’t think they’re “worse people” because of who occupies the Oval Office. Right now, too many are scared stiff: of contracting the virus; of losing family or friends to it; getting laid off; figuring out how to pay bills; praying (in reality or metaphorically) for a speedy end to all of this; trying not to snap at people who are flagrantly defying shelter-in-place rules; or, for the luckiest, beating back the boredom of staying at home all day, relishing a walk outside where in much of the country a gorgeous spring is so incongruous with all the panic, death and information, accurate or not, dispensed about COVID-19.

By the way, despite the fascinating embrace of State’s Rights by the likes of Gavin Newsom—he’s replaced Andrew Cuomo as America’s Governor—of California, who despite an oily reputation, has been impressive in his proactive response to the virus, count yourself lucky if you’re not a Michigander right now. Democrat Gretchen Whitmer—who for the lifespan of a Trump tweet was America’s Governor, sandwiched between Andrew Cuomo and Newsom—has barred her constituents from traveling to each other’s homes. Per the Journal: “Under Gov. Whitmer’s order a Michigander can buy a bag of candy or a lottery ticket, but not a pack of seeds or a can of paint. He can enjoy a boat ride by himself or with his dog—but not if his boat has a motor. The logic of these seemingly arbitrary distinctions must elude most Americans.”

By contrast, Maryland’s Republican Gov. Larry Hogan—a possible contender for the 2024 GOP presidential nomination—has, like Newsom, been proactive in his handling of the pandemic (Baltimore City officials, typically, are too busy doing nothing to make an impact) but is also sensible. For example, unlike Whitmer, Hogan has no problem with the purchase of seeds, and has declared that garden nurseries, which sell tomato plants and other future edibles, are “essential businesses.”

Unlike Nichols, whom I doubt feels he’s a “worse person” for listening to Trump, “ordinary Americans,” as the media tic goes, citizens have far greater concerns than “Trump send[ing] us into a hole from which we may never recover.”