Warren's Confrontation with Sanders, Steyer's with Us All

And other tidbits from last night's debate. 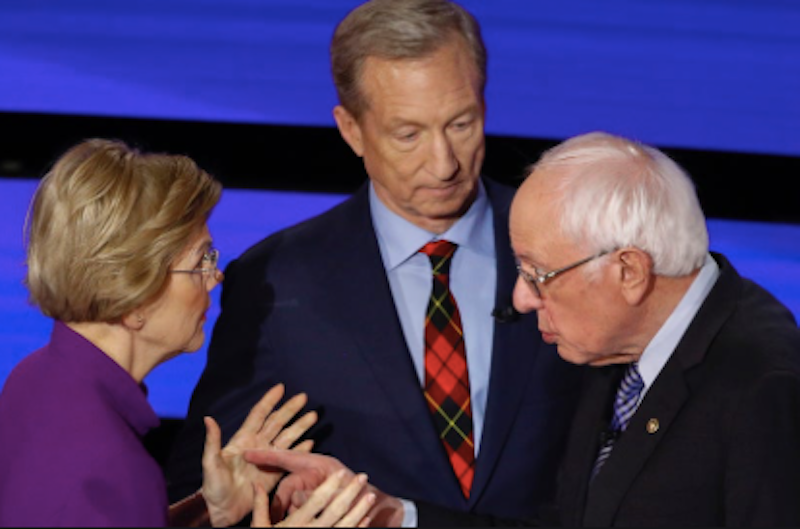 The model is combat, really, or the “Battle Royale” style of wrestling match. That is, elections aren’t cooperative activities, because someone wins and everyone else loses. Tuesday’s debate, wrote Gene Robinson, "gives Democratic officials reason to hope that the happy ending they seek for might actually happen. These were not bitter rivals. They actually seemed to like each other." Many have said they'd vote for any of these people with pleasure over Trump. Yet they're going to have beat one another before they get the crack at Trump. Running our quasi-democracy through two incoherent political parties entails that in order to beat Trump, each of the candidates will have to beat a bunch of other Democrats first.

Stop whining about conflict between the candidates (Sanders and Warren, who perhaps like each other less and less, in particular). One of them is going to lose, even if they end up on the same ticket. It's sweet that that they both want to help us all, or rock us gently in the arms of the state from cradle to grave, but to do that each of them will first need to beat the other. The conflict is built into the system: it's an agonistic process, focused first on smashing the people who basically agree with you. If you're sitting outside, you can affirm the conflict as at least something that seems to be happening, as opposed to another tribute to the amazing wonderfulness of our troops, the restoration of the American dream, or other boilerplate. It's not clear whether having a “tough primary process” sharpens or damages candidates. It probably varies by situation, by year and candidate.

I think that it's been too “civil,” and the gloves have to come off now. Perhaps Sanders' denial that he told Warren privately that a woman can't beat Trump is pretty cagey, because the sentence "I would never say that a woman can't win the presidency" embeds the sentence "A woman can't win the presidency," which might just nag at you. I’d never say, for example, that Sanders is an advocate of Xi Jinping thought, and that a commie can’t be elected president of the United States. I’ve never said that, and I never would. And demonstrably, that is false: look at all the votes Gus Hall got.

On the other hand, if you’re looking for the safest choice, you'll just nominate the old white guy and live forever in the status quo. These days, the question of who’s most electable (as indeed all human matters) seems to come down to group memberships. That might be how we lost Kamala Harris, Cory Booker, and Julian Castro, lost them too soon, too soon. For the unbearable whiteness of being I blame all the people who relentlessly say of Trump that, "This is not normal."

Last night, we were blinded by the white. Americans of all races seem to take comfort in whiteness in leadership, and you can go all in for mass incarceration and “black parents should try to use words” and still dominate the black vote in South Carolina. Or can you?

Overall, however, and despite the handshake debacle afterwards, that was still fairly tame, as Robinson says. I still think Buttigieg is the most plausible president, and the only candidate of the original 24 capable of improvising a direct answer to a question. But when he does, it sounds like he's rehearsed the answer anyway: too perfect, which I imagine is what people have been saying about Pete since second grade. Biden didn't fuck up too badly, which is now his standard of success. He’s a dolt, though. I thought Warren did well, after a real debate disaster a few months ago; Sanders was pretty good. I would’ve liked to see them really take some swings at one another, though. They wanted to, I believe.

What really stuck with me was being confronted by Tom Steyer, which is like being confronted by Judi Dench in Cats. He always stares directly into the eye of the camera and seems to impale you with his merciless gaze and vague sentences. After the interminable event was over, I slept fitfully, as I often do after a presidential debate, sobbing for my country's abnormality. Then in my dreams Steyer appeared to me, always swinging around a second after I caught a glimpse of him and looking me dead in the eye.

In my dream, Steyer didn't really say anything, but he never stopped talking. "Look, I played team sports my entire life," he said. "And if there's one thing I will not permit, it’s someone to run down the field and kick my teammate in the face. And that’s exactly what I've seen over the last seven years, traveling around this country, seeing these Republicans, led by Mr. Trump, basically kicking the American people in the face." I watch a lot of ESPN, but have rarely seen someone in team sports run down the field and kick someone in the face, no doubt because Tom Steyer won't permit it.

Steyer's remark clarifies Klobuchar's dark claim that "This debate isn't real. I was in Vegas the other day and someone said 'Don't put your chips on a number on the wheel that isn't even on the wheel.'" That is something, indeed, that the universe itself will not permit, though Aaron Blake quoted it as an example of Klobuchar's eloquence, of which it’s a good measure.