The Swing of Power

Even if the system worked, it wouldn’t be a good one. 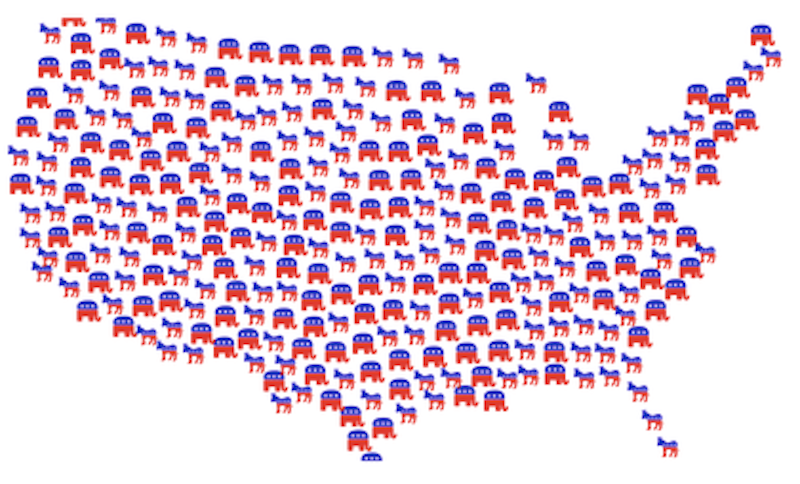 If Democratic and Republican Parties want to use the Electoral College to their advantage, they should upend the current presidential primary system. As now constituted, in theory each state, Washington D.C. and American territories (which don’t vote in the general election) have a say in who’s elected. Performing well in primaries is supposed to earn delegate support that helps the candidate earn their party’s nomination. The number of delegates each state has is based on their population.

Even if this system worked, however, it wouldn’t be a good one. When a candidate like Donald Trump, who won the EC but lost the popular vote, nominating candidates based on their appeal in solidly red or blue states isn’t smart politics. Rather, the most valuable states in the primary should be weighed carefully by if they’re battleground states that would help the candidate get to 270 electoral votes.

One big storyline of the 2016 presidential election was Trump winning Pennsylvania, Wisconsin, and Michigan—46 electoral votes—by fewer than 80,000 votes. Similarly, George W. Bush won the 2000 election as he got 537 more votes than Al Gore in Florida, but had about half a million fewer votes nationally. Some states are far more valuable than others in presidential elections.

For the time being, those states and a few others like Illinois for Democrats and Mississippi for Republicans are givens for their respective sides. When picking the nominee for a party, why not give the most delegates to the most crucial states of the election?

If Democrats want to beat Trump, they should pick the candidate who fares best in the Rust Belt as their nominee. However, there’s no guarantee that candidate will be their nominee. Even though California would vote for any of the Democrats running over Trump, their state has 495 primary delegates out of the total 4594. After that, New York has 327 and Texas has 262. This is a lot higher than the states that flipped from Obama to Trump in 2012 to 2016—like Michigan (147 delegates), Pennsylvania (177 delegates), Wisconsin (90 delegates), Florida (248 delegates), Iowa (49 delegates in their caucuses) and Ohio (153 delegates).

Those and other states that were close last time around like North Carolina, New Hampshire, Nevada, Arizona, Maine, and Minnesota are what Democrats should be worried about. Why not hand over 50 percent of the delegates to the most important 10 states, 25 percent to the next 10 and the remaining 25 percent to the rest, regardless of state size?

Would it give some states a disproportionate amount of power? Yes. As someone who lives in Massachusetts—a safe blue state—I can attest that’s already happening in presidential elections. The tricky part for both parties is that the battleground states change, so they’d have to re-determine the values of every state each election cycle. In 2004, George W. Bush won Colorado and New Mexico. However, in 2020, those aren’t really in play for Trump with demographic change over the past 16 years and the Party’s shift rightward on immigration. Notice how Tom Tancredo—who has similar views to Trump on immigration—is 0-for-3 in Colorado governor races. That helps explain why Colorado will likely go blue in 2020 for the fourth straight presidential election.

However, if one looks at Minnesota now, which hasn’t voted for a Republican presidential candidate since 1972, it could be the next Midwestern state to turn red as Republicans attract rural white voters. It’s a state Trump lost by less than two percentage points in 2016.

In eight years, who knows what the swing states will be? Arizona and Texas could be there for the same reason Colorado and New Mexico are now blue. But for all we know, Oregon could be up for grabs by then. Keeping up with these changes is a must for both sides under this primary system. If not, they'd risk a landslide defeat.