CNN disgraces itself once again. 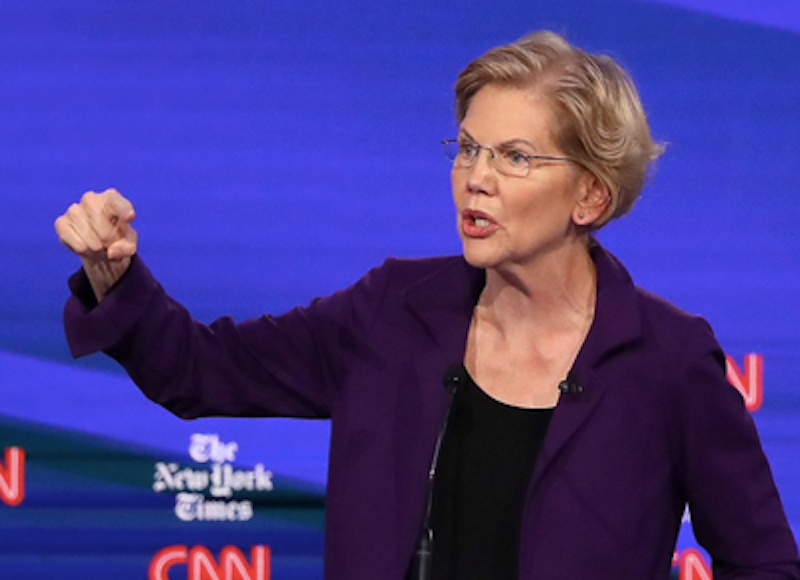 Elizabeth Warren lost last night’s debate dramatically, and lost it early. I don't know how much audience the event maintained through the second and third hours. In the first few minutes, though, after they went around on impeachment, Warren was asked—as she knew she would be, because she's already refused to answer the question many times—whether middle-class taxes would rise under her healthcare plan. "Will you raise taxes on the middle class to pay for it, yes or no?"

Warren gets asked this over and over just because she won't answer, and last night, in pretending to answer, she went meta: "I have made clear what my principles are here." "You know, the way I see this is, I have been out all around this country." "Look, the way I see this..." "So the way I see this, it is about what kinds of costs middle-class families are going to face." "So let me be clear on this." "So, let's be clear." Those all came within a few minutes, each mechanical pledge of clarity followed by mere evasions. Even Bernie Sanders, whose plan Warren has more or less signed on to, got frustrated with her and plainly asserted that taxes will go up but total costs will go down for most people.

I'd be tempted to do a fact-check on Warren's claims to be clear: no, that wasn't clear. Eighteen pinocchios. Kamala Harris pressed her later to say whether Twitter should cut off Trump's feed. "Look," Warren responded, "I think all of the rules should apply across the board. I don't have a problem with that." Not yes, but not no. Everyone starts every sentence with "Look" nowadays, a twitch promulgated by Sarah Sanders in her run as White House press secretary. I can't tell the liars from the idiots anymore. They all talk the same.

"We can walk and chew gum at the same time," Julian Castro pointed out. Maybe these people should just chant their pinhead phrases in unison: that would shorten our sentence here in limbo. Being suspended in this eternal recurrence of the same non-signifying words is purgatory, man.

Warren's tone was not only pointedly evasive and disingenuous; it was classically condescending and manipulative, reminding everyone why they don't like Harvard professors. The only question was how to use phraseology to fool people, which entails that she thinks the people watching are fools. Her goal appeared to conceal the contents of her own plan, or Bernie's plan anyway. I don't understand who can possibly be advising her to take this approach, but it gave Buttigieg and Klobuchar plenty of openings. She's had months to think about how to respond on this, and has many simple options, as Bernie showed. Until she answers clearly, rather than meta-clearly, everyone who interviews or debates her is going to ask that question; she's not going to get to anything else. Whatever she does on this from now on, she’s already fucked it up repeatedly. But they'd better try to fix it right now, or it will devour her candidacy.

Warren’s still the front-runner, I think, if for no other reason than that Joe Biden is befuddled, comprehensively incompetent. But Sanders might’ve gained some momentum last night at her expense: he's clear, while she, in the service of obscuration, merely asserts falsely that she’s clear. And he seemed healthy, as well as calmer and less gratingly angry than previously. Possibly the brush with mortality has done him good. The Squad has endorsed him, which must be driving the Warren campaign crazy.

In the debates so far, Buttigieg has shown himself to be the only candidate who can be relied upon to produce coherent sentences that are responsive to the questions. The others—Sanders excepted—try to paste together a collage of focus-grouped phrases. For Amy Klobuchar, saying the word "bold" is a substitute for boldness, a saccharine boldness substitute. For some reason, Tulsi Gabbard used the phrase “regime-change war” seven times in under a minute.

I think at this point we should lose Cory Booker (who goes down best in small or no doses), Harris (who really has no distinctive positions), Amy Klobuchar (who seemed to be tripping on caffeine), and Beto O'Rourke (who did better than previously, but not well enough). Perhaps I'd keep Julian Castro around a bit, just so I can watch him walk and chew gum.

I want Gabbard to stick, because I like an eccentric and a peacenik in white. However, she was doing Assad talking points last night; she portrayed all the people fighting against the Syrian regime as al Qaeda terrorists. And she blamed Turkey's present incursion against the Kurds on American intervention in Syria, which is just bizarre.

The news anchors at CNN appear to be Democratic Party operatives. For example, as soon as the Hunter-Biden-in-Ukraine story broke, they started characterizing Hunter as completely exonerated, or, amazingly, as never having done anything wrong. Anderson Cooper took that approach in a question: "Mr. Vice President, President Trump has falsely accused your son of doing something wrong while serving on a company board in Ukraine. I want to point out there's no evidence of wrongdoing by either one of you." It would seem hard to confuse “there's no evidence of wrongdoing” with “he's never done anything wrong.” Sometimes you lose, or for that matter win, because the refereeing is bad.

The CNN people have evidently got total, fact-free defense of Joe Biden muddled up in their minds with a factual attack on Trump. I hope that when Trump’s gone, they can ditch the partisan propaganda and return to some semblance of journalism.