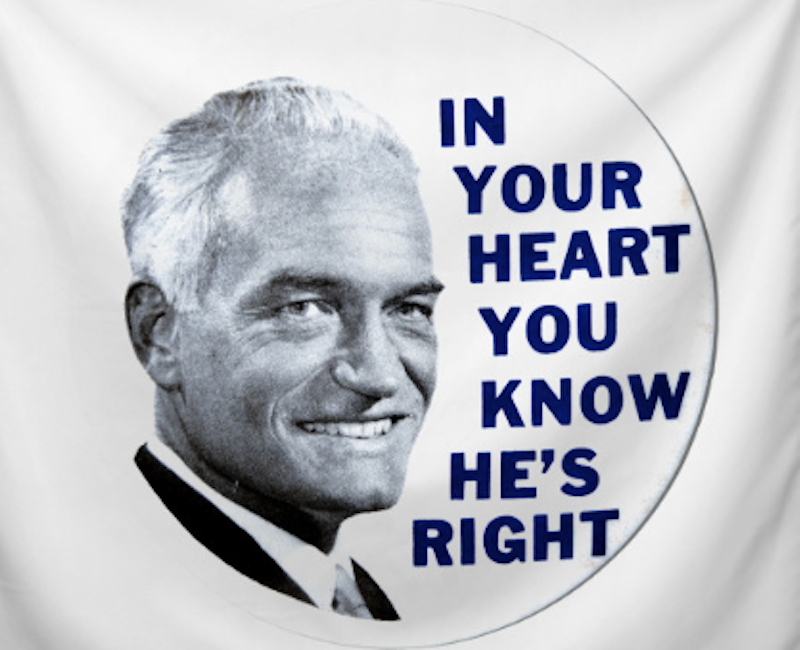 Meeting the warm and wise anarchist law professor Butler Shaffer back in the late-1990s, when I was a young libertarian, was a nice glimpse of the future for me. His complete disillusionment with mainstream politics, even mainstream politics with a superficially libertarian gloss, struck me then as likely the most realistic attitude toward the world, but despite my strong suspicion he was right, I figured I’d give optimism a try for another decade or so. Shaffer passed away last month, well after my hopes for mainstream politics had died.

Shaffer, a law professor at Southwestern Law School in L.A., pretty much gave up on voting and politicians several years before I was born, citing his time working on Goldwater’s 1964 presidential campaign, which I still tend to think of as one of the more principled campaigns in U.S. history. Like many an eager political activist, Shaffer asked one of his colleagues on the campaign which reforms he expected to be put in place first if their man won the race, to which the colleague replied that all that talk about reforms and policies in a political campaign is just hot air to get the volunteers and voters stirred up, and none of it should be expected to come to fruition.

Not even the Goldwater crowd had high hopes? I realize to many people, that campaign is now remembered mainly for losing, but among free-marketeers, at least, I figured it’d be looked back upon as a very noble try. But Shaffer ended up an anarchist, if by that we mean in part someone who looks to private behavior and individual changes of heart for hope instead of elections and political slogans. Oh, and he wanted to abolish government, like all good-hearted people. (A surprising number of sellout libertarians are not onboard with this program, I’ve learned during my own long, disillusioning journey.) He wrote, among other things, the book Calculated Chaos, arguing not merely that government is a bad institution (as one might expect a libertarian to believe) but, more radically, that all institutions—even market-based, scientific, or religious ones—should be expected to engage in selfish, often parasitic, self-perpetuating behavior, requiring us to be skeptical about them. Instead, people are filled with anxiety when things don’t fit into the usual rules and categories.

One of his favorite examples was a hippopotamus on the loose in Orange County, California in 1978 after escaping from a zoo. The urgent desire to recapture Bubbles, though she’d done no harm, led to her being shot with powerful tranquilizer darts and dying, amidst a media circus. Hippos can be very dangerous, but would it have been so wrong to let Bubbles roam a bit longer, defying the control grid as it were, until she could be more carefully corralled—or even allowed to keep roaming if she could be kept away from potential victims?

This was around the same time California was becoming a model for the world, in a bad way, of how to do things like use helicopters to raid hippie compounds that might be engaged in other rules-defying behavior, such as pot-growing. Maybe both the hippo and the hippies should be allowed to do their own thing, as much as was compatible with the safety of neighbors.

Shaffer was a member of the Greatest Generation, though he certainly wouldn’t have agreed that that cohort enduring the Depression and World War II were much evidence of greatness. The Boomers also gave us a freedom-lover who passed away in recent weeks, though: drummer and lyricist Neil Peart from Canadian prog rock band Rush. Songs like “Subdivisions,” about the conformist mindset of the suburbs, are a reminder that although Peart went through an Ayn Rand-influenced libertarian phase, he wasn’t interested solely in economic arguments. The deeper battle is psychological, and it’s fought in narrow-minded high school cliques as much as in formal political debates between authoritarian candidates.

I think the suburbs often get a bad rap and actually provide a pretty good model for orderly liberty, one that in the fairly optimistic and civil late-20th century had room for both private property and creative daydreaming, as I argued in the essay “Conservatism for Punks” 10 years ago. But I’m not the one eager to engineer the culture, mainly just a defender of property rights, willing to let the chips fall where they may, willing to let institutions evolve.

Peart worried more, I think, that the masses would get it wrong without some steering, and he gradually moved away from libertarianism toward (as he put it himself) “Bleeding Heart Libertarianism,” with its fairly casual and mushy acceptance of some level of government, then (as so often happens when people are lured down the BHL road) on to environmentalism and a cautious endorsement (from a Canadian vantage point) of the U.S. Democratic Party. He will be missed regardless.

I honestly don’t expect philosophical precision from people who are busy being entertaining, usually a more productive activity than politicking. So I’ll also pause to mourn a Gen Xer we lost this month, author Elizabeth Wurtzel. I didn’t know her but had more than one mutual acquaintance with this woman who’ll likely be remembered for being a high-profile “crazy chick,” or rather a chronicler of her own depression and anti-depressants use in the book Prozac Nation. However, she also wrote the book Creatocracy, about the way intellectual property rights shaped America’s whole cultural history of strange, daring, individualistic, and proprietary ideas.

Libertarians are divided on whether property rights should apply to the intellectual (as opposed to the merely physical) realm, but—in much the way I have to respect someone in a field like rock ‘n’ roll for singing about something as unhip as the perils of enforced egalitarianism—I was just pleased to see Ivy League liberal hipster Wurtzel writing about something as rational and stodgy, as conservative in a sense, as property rights’ influence on creative types, acknowledging that economic incentives matter and that good things don’t just flow from the governmental center, nor undifferentiated mass movements of non-owners.

Living in the suburbs on Prozac with hippos on the loose may sound like a nightmare to some people, but given the historical alternatives, I’m grateful to have lived in an era so cushy—and so easily tailored to individual tastes and needs—that those threats were among our biggest worries, and I am grateful this trio of thinkers influenced that era.