It’s a laugh every day at The New York Times as the walls (but not paywalls) come crashing down. 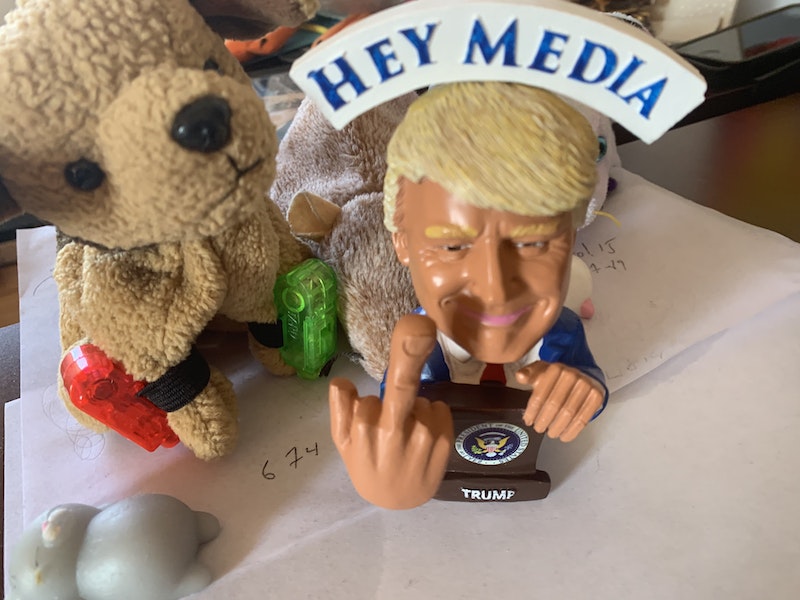 Now that The New York Times has shed any pretense of sober and serious news coverage and political commentary—although I’m certain the publisher, executive editor and op-ed columnists haven’t awoken to this fact, even in private—and is more or less a duplicate of BuzzFeed, The Daily Beast, Teen Vogue and Politico (it’s too harsh, at this point, to lump it in with Vox), it’s a not uninteresting sideshow to see the house come tumbling down. The past week offers many examples of the paper’s harum-scarum approach to modern publishing, starting with its announcement of an upcoming editorial board Democratic nominee endorsement on Jan. 19, the deliberations of which, according to deputy editorial page editor Kathleen Kingsbury, will not be held in secret, as in the past, but open for all—those curious, at least—to see. She tweeted: “These aren’t typical times. The 2020 election is beginning in the shadow of voter suppression, a presidential impeachment, not to mention climate change and escalating foreign conflicts. Voters have a lot to think about in this election cycle, and we want to help.”

I’ll decline the help, thanks, but appreciate the sentiment.

The click-counter wins again over dignity, a quality that many held dear, referring to the Times as “the paper of record” and, anachronistically, “The Gray Lady” (or, for Anglophiles, “The Grey Lady”).

I’m game for speculating on what the Times intelligentsia (a loose term) no doubts believes will make a difference in how the Democratic primaries play out. Initially, when this contest was announced, I instinctively spit out “It’ll be Warren! to my sons, who agreed. Obviously, Bernie Sanders is out, too left-wing, crabby and bad for portfolios, and though Joe Biden would suit the Times hierarchy fine as a one-termer—a return to the bygone status quo—his age, political baggage (voted for Iraq war and “handsy” past) and “Oops” moments probably eliminate him. But as the nomination process speeds up, with the Iowa caucuses finally kicking off the actual voting, and Warren losing support in the polls (again, as I’ve noted previously, never has there been a year to take polls less seriously) and with cash donations, she’s abandoned her “selfies!” nonsense and gone negative on Sanders and Biden. Unseemly, one might think, for the Times decision-makers, despite her gender.

I took a leap—after finagling 3-1 odds—making a bet with my son Booker that ultimately the Times will choose Mayor Pete. God knows how they’d justify it: his campaign’s largely incoherent, but perhaps his youth, intelligence, minority status as a gay man, and service in Afghanistan will carry the day. It’s a stretch, I realize, but not inconceivable, unless they try to ramp up the chances of Sen. Amy Klobuchar.

David Brooks, a putative conservative who’s been roundly mocked in journalistic circles since about 2008—again, he must have dirt on the Sulzberger family to keep his six-figure job, which leads to other paid jobs—wrote a column on Jan. 9 that finally acknowledged what anyone with a brain figured out at least three years ago.

A #NeverTrumper, Brooks wrote: “This is Trump’s ultimate victory: Every argument on every topic is now all about him. Hating Trump together has become the ultimate bonding, attention-grabbing and profit-maximization mechanism for those of us in anti-Trump world. So you get a series of exaggerated fervors—the Mueller report! Impeachment! The Steele dossier!—that lead ultimately nowhere… We fight viciously about Trump, but underneath, a populist left-right curtain has descended around America, separating us from the Mideast, China, even Europe. The real high-risk move is the one both parties are making together: that if we ignore the world it will ignore us. (It won’t.) Maybe once the Inflammatory One is finally gone from the scene we can have an intelligent conversation about that.”

“The Inflammatory One!” The scabrous, Swiftian wit! Just cracked myself up again. Oh, and Brooks can’t help the condescension: the headline for his article was “Trump Has Made Us All Stupid.” Skip the response that writers often aren’t responsible for headlines: we now know that Times op-ed columnists aren’t fact-checked, researched or probably even read by sub-editors (and who can blame them?) before the “send” button is pressed.

What Brooks, typically, hasn’t figured out is that “intelligent conversation” has largely disappeared from public forums, most notably the media.

Meanwhile, Bret Stephens—who’s had his own troubles in the past year with bedbugs and eugenics—ruefully notes that Bernie Sanders could actually win both the Democratic nomination and presidency. Stephens is another #NeverTrumper, but as a conservative (unlike Brooks) who just finds Trump’s narcissism and empty belligerence unworthy of the White House, he’s anti-Sanders as well, preferring someone like Mike Bloomberg or Biden.

I haven’t a clue who Maureen Dowd’s pulling for—she’s desperately searching for her funnybone, lost somewhere like a 1970s contact lens—and besides, she’s too preoccupied with the Royals and perhaps has given up on handicapping the Democratic race, or at least expressing a preference.

Does anyone in America give a fuck about the Royals, aside from columnists scratching for story ideas? Dowd says (I can’t tell if she’s indignant or faking it): “And yet, even if the royals’ role in the culture [yours, Maureen, not mine] is now akin to the Kardashians [isn’t that reference out-of-date?], it wasn’t cool for Meghan and Harry to pants the 93-year-old queen, defy her instructions, dump their Megxit plan on Instagram and intensify the sad split between the brothers. (If ever there was a time for some dry gin…)”

Dowd’s always been a star-fucker, which, as Boris Johnson might say, I don’t give a bob about, but her patter’s gone as stale as Brooks’.

Then again, there’s always Frank Bruni to “pants.” Writing on Wednesday about the latest debate, Bruni says he doesn’t have a crystal ball so he can’t tell if a female Democratic nominee would have a “harder time” defeating Trump than a male. Yet in the next paragraph, Bruni discovers that crystal ball, writing: “Either [Warren or Klobuchar] would give Trump a serious run for his money. Both have earned the right to take him on. Both would be formidable presidents.”

How does Bruni know that Warren or Klobuchar would be “formidable presidents”? He doesn’t, but no matter, those words will comfort a certain percentage of Times readers, and that’s what really counts.